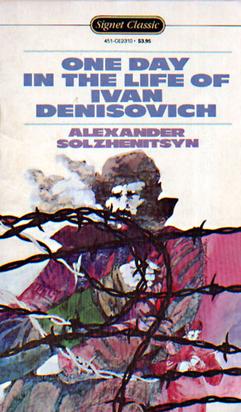 A Simple Tale that Undid a Totalitarian System

Robin Ashenden writes about the seismic of significance of the appearance of Aleksandr Solzhenitsyn’s first novel, One Day in the Life of Ivan Denisovich, which appeared Sixty years ago last week. He writes:

Sixty years ago, on Saturday, November 17th, 1962, a book was published in the Soviet Union that almost certainly changed the world. It would be the first step in a writer’s public exposure of an entire political system, and it was taken at great personal risk. Almost overnight, it made its author world famous, and decades later, historians and critics would still be describing him as “the dominant writer of the 20th century,” and observing that he had helped “to bring down the greatest tyranny the world has ever known.” The book in question was One Day in the Life of Ivan Denisovich, and the writer—who would later win a Nobel Prize and sell 30 million copies of his work—was Aleksandr Solzhenitsyn.

The book was published less than 10 years after the death of Joseph Stalin, the dictator who had frozen his country in fear for nearly three decades and subjected his people to widespread deportation, imprisonment, and death. His successor Nikita Khrushchev—a man who, by his own admission, came to the job “elbow deep in blood”—had set out on a redemptive mission to liberalise the country. The Gulags had been opened and a swathe of prisoners freed; Khrushchev had denounced his predecessor publicly as a tyrant and a criminal and, at the 22nd Party Congress in October 1961, a full programme of de-Stalinisation had been announced. As for the Arts, previously neutered by the Kremlin’s policy of “Socialist Realism”—in which the values of Communism had to be resoundingly affirmed—they too were changing. Now, a new openness and a new realism was called for by Khrushchev’s supporters: books must tell the truth, even the uncomfortable truth about Communist reality… up to a point. That this point advanced or retreated as Khrushchev’s power ebbed and flowed was something no writer or publisher could afford to miss.