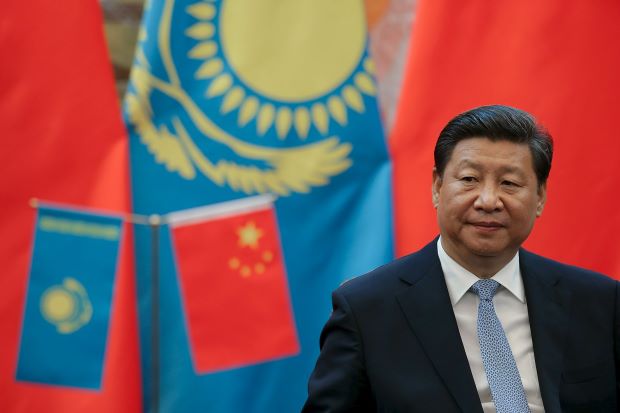 A Chinese President Visits the United States - Where are the Arendtians?

“I do not doubt that in the very long run, the whole of Asia will fall under Chinese influence but not necessarily under Chinese domination.”

The People’s Republic of China (PRC) is fertile territory for Arendt scholars. But, as President Xi Jinping visits the United States this week, where are they? Students of Arendt are acute observers of unfolding refugee crises, human rights abuses, ethnic cleansing and a myriad of other ills. China, on the other hand, has almost entirely escaped their notice. No one can claim it is not visible.

During Mao Zedong’s lifetime, the PRC was a poor, autarchic, closed country. Few people visited China, and news about it was scant; those intellectuals who glorified the Cultural Revolution, and who gave a Western imprimatur to its grossest cruelties, are long forgotten. Today, by contrast, the Middle Kingdom bestrides the globe like a colossus. The most populous country in the world, it is its second largest economy--the largest by some estimates--and houses the second largest stock market. Its recent Asian Infrastructure Development Bank initiative is poised to rival the World Bank. European leaders kowtow to Beijing to acquire favorable trade opportunities. Small devaluations in China’s currency cause panic among investors. Military parades in Beijing showcase ballistic missiles able to destroy American aircraft carriers in the South and East China seas, while Chinese incursion into these regions--creating air security zones; claiming possession of disputed island, such as the Spratleys; and reclaiming land from the sea on which to build military bases--alarms China’s neighbors. And woe betide anyone who shows the least public respect towards or affection for the Dalai Lama, however inane it may be. Bon Jovi is only the latest band to have had its mainland gigs canceled when it was revealed that the New Jersey rockers had used a picture of the Tibetan spiritual leader in a video backdrop. The band's lead singer Jon Bon Jovi performing in front of an image of the Dalai Lama at a concert in 2011. Allegedly, the Chinese regime banned the group from performing after discovering the images. (Source: The Daily Mail UK)[/caption]

China’s role as a major economic player and, increasingly, its status as a global political power lend it a prestige it never had in Mao’s day. Editorials in the Wall Street Journal and The Economist never tire of giving China’s leaders sage advice, treating the PRC as if it were a country like any other. It is not. Arendt’s concept of totalitarianism enables us to recognize the PRC’s peculiar trajectory since its foundation in 1949: a regime that evolved, after Mao’s death, from a totalitarian state into a collective dictatorship that is now reverting to standard totalitarian behaviors. Writing in the Financial Times, Jonathan Fenby observes (27 Oct 2014, p. 10) that in two years at the top, Xi Jinping has taken “seven top positions for himself, and has revived Mao Zedong’s doctrine of the ‘mass line’ to enforce party power. The big anti-corruption campaign of the past two years is being waged by a secretive party group that operates outside the legal system. Mr. Xi has told artists and writers that their work should foster ‘correct’ viewpoints of history, nationality and culture”.

Ideological campaigns, then, are back in vogue, buttressed by paramilitary police forces that are soaking up the excess of demobilized army units; the radius of the secret police is also steadily expanding. From roughly 2003 to the anointing of Xi Jinping as paramount leader in 2012, China witnessed the growth of a “rights defense” movement in which, as Maya Wang of Human Rights Watch puts it, “all kinds of popular and often spontaneous advocacy by netizens, activists, lawyers, and online commentators responding to injustices could snowball into pressure on the government.” Today this movement is in full retreat, its blogs shut down, its leaders detained, its lawyers harassed when not imprisoned. But is not just that China’s elite has no tolerance for dissenting views. It would also destroy the nation to defend Communist Party omnipotence.

In short, the current president, Xi Jinping, soon to be feted in Seattle and Washington D.C., is more Maoist than any of the Chairman’s previous successors. Yet he continues to win plaudits. President Xi’s sweeping anti-corruption campaign sounds noble. Corruption harms economies, sows distrust among citizens, hurts those who are subject to its injustice. But anyone who reads Arendt’s The Origins of Totalitarianism will rightly suspect that this heavily orchestrated anti-corruption movement is also a super-purge directed at those who, in some way or other, constrain the supremacy of the current leader’s faction. The purge is eerily reminiscent of the totalitarian tendency towards periodic party cleansing. It is also absurd because the only means of abolishing institutional corruption in China is to abolish the Communist Party, its principal cause. Where there is no stable law that can be fairly adjudicated, people act beneath the law. Where contracts cannot be enforced, “gifts” are exchanged for favors. The Great Hall of the People of China. (Source: Forbes)[/caption]

Some years ago, I wrote an article describing Arendt’s ambivalent attitude towards the PRC. (Incredibly it is, to my knowledge, the only article ever written on this subject.) Writing in 1966, she could not decide whether the Maoist regime was or was not totalitarian. Yet I went on to argue that, in many respects, Arendt’s theory of totalitarianism fits the Maoist regime even better than those of the Soviet Union and Nazi Germany. Readers can find this article--“China the Anomaly: Hannah Arendt, Totalitarianism, and the Maoist Regime”--here.

It is time to update the analysis. I urge Arendt scholars who investigate political freedom, state repression, terror, propaganda and ideology to take more interest in China. The country is still more like a dictatorship than a totalitarian state but it reserves the full panoply of totalitarian powers. These may come increasingly into play as China’s growth slows. The country is far less stable internally than it appears because economic expectations within China have grown exponentially since Deng Xiaoping’s Open Door policy began. China’s nationalist rhetoric is also counter-productive, causing neighboring countries such as the Philippines, Vietnam, South Korea and, above all Japan, to balance against it.

Is the visiting Chinese President a Mao with money? That is a hybrid that Hannah Arendt did not anticipate. Nor did the Sinologists who, without understanding her, have for years claimed that the concept of totalitarianism is irrelevant to the PRC.

Featured Image: Behind the curtain: Xi is set to tour Microsoft's Redmond campus and Boeing's massive factory when he visits Seattle as part of his official US visit next week. — Reuters (Source: The Star)