I stopped in at the “Systematic” exhibit now on at the Project 176 in London and received a tour by two of the gallery assistants, David Angus and Chloe Cooper. The exhibit, curated by Ellen Mara De Wachter, confronts the question of the place of the human being and the role of the artist at a time when individuals and humans are being subsumed by rational, social, and scientific systems. Featuring 18 works by 8 artists, the exhibit raises the fundamental question of our time: what does it mean to be human in an increasingly inhuman age?

The works on display in “Systematic” provoke principally because they enthusiastically embrace the utopian optimism that underlies the thinking of prophets of singularity from Ray Kurzweil to Sergey Brin. The premise of the exhibit is the power of systems over individuals. As De Wachter writes in her essay that accompanies the exhibit, the system today represents the emergent properties ‘of the combination as a whole—which are more than the sum of its individual parts.’

The artists in “Systematic” produce works that abandon themselves to systems that operate beyond the awareness or control of human intelligence.

Justin Beal offers glass and dry-wall tables that incorporate rotting fruit into their joints. The fruit rots and attracts insects, molds, and fungi that alter the “artwork” in ways that are outside of artistic control. For De Wachter, Beal “celebrates the unpredictability and undecidability that befall all works of art once they leave the artist’s hands.” The key word here is “celebrates.” For Beal, as for many in the artistic and technological worlds today,  the power of the system over the individual is to be welcomed.

Katie Paterson’s “Earth-Moon-Earth” partakes in a similar bow to the power of systems. Paterson translates Beethoven’s Moonlight Sonata into morse code, beams it to the moon, and receives it back upon its reflection. She then translates the returned code into musical notes, with all the losses, transpositions, and gaps left in. This new sonata is then played and the spectator can listen to the new sonata played on vinyl through headphones in the gallery. 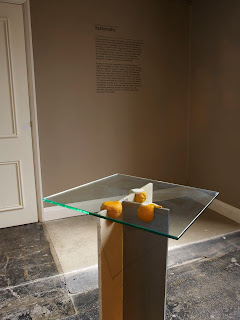 For De Wachter, artists like Beal and Paterson—and the other artists on exhibit—work by “surrendering a certain amount of control to the systems” with which they interact. In doing so, “these artists admit that the artworks they produce have a life of their own, and a life beyond the studio in which they were made.”

The language of artistic surrender is reminiscent of an older artistic ideal and also eerily different. Artists of the pre-modern and classic ages were often anonymous. The artistic ideal was to serve simply as a medium through which the divine truth flowed and manifested itself in the world as a work of art. The artist, bemused by his muse, lost himself in rapture and gave himself over to the fashioning of a work in which the truth came to stand in the world. Opposed to this tradition of the artist as medium is the ideal of artistic genius, the artist who composes works from the productive brilliance of his own mind.