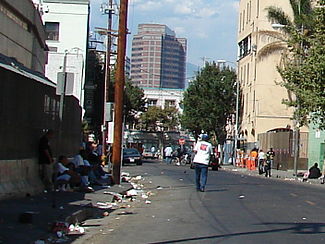 Chris Arnade was a Wall Street banker, a member of what he calls the “Front Row,” those who succeed and lead our society. But he gave that life up to chronicle the lives of those who belong to the “Back Row,” the forgotten people. His journey began with simply by walking through the neighborhoods of Back Row America. As he walked, Arnade listened and had a revelation.

What I started seeing and learning was just how cloistered and privileged my world was—and how narrow and selfish I was. Like most successful and well-educated people, especially in New York City, I considered myself open-minded, considerate, and reflective about my privilege. I read three papers daily, I watched documentaries on our social problems, and I voted for and supported policies that I felt recognized and addressed my privilege. I gave money and time to charities that focused on poverty and injustice. I understood that I was selfish, but I rationalized. Aren’t we all selfish? Besides, I am far less selfish than others. Look at how I vote (­progressive), what I believe in (equality), and who my colleagues are (people of all races from all places).

In his new book “Dignity: Seeking Respect in Back Row America,” Arnade listens to the people that Front Row America wants to help. And what he hears is transformative.

My focus changed during a rare, quiet moment in the industrial part of Hunts Point on a Sunday afternoon. The truck traffic was light and most of the shops were closed. Takeesha was standing alone by a trickling fire hydrant, washing her face. She was working, wearing thigh-high faux-leather red boots and leopard-print tights, waving at every car or truck that passed by. She yelled to me, “Hey, take my picture!” When I asked why, she said, “Because I am a sexy, beautiful prostitute.”

Over the next half hour, she told me her life story. She told me how her mother’s pimp had put her on the streets at twelve. How she had had her first child at thirteen. How she was addicted to heroin. I ended by asking her the question I asked everyone I photographed: How do you want to be described? She replied without a pause, “As who I am. A prostitute, a mother of six, and a child of God.”

I spent the next three years following Takeesha and the street family she was a member of—roughly fifty men and women who lived under bridges, in abandoned buildings, in sheds, in pits, in broken-down trucks, on rooftops, or, if they scored enough money, in per-hour motels. What she showed me prompted me to travel to other neighborhoods in cities across America, from Buffalo to New Haven to Cleveland to Selma to El Paso to Amarillo. In each of these places, people have a sense of being left behind and forgotten—or, worse, mocked and stigmatized by the rest of the world as it moves on and up with the GDP.

Above all what Arade learned on his walks is that the people of Back Row America had something to teach those of us in the Front Row. On Wall Street and in the citadels of power, Front Row America advocates “for policies based on data. I thought we should focus on things that could be quantified—like higher profits and greater economic growth.” But Arnade found in the Back Row faith and community that, though immeasurable, are meaningful.

Our isolation from the bulk of the country left us with a narrow view of the world. We valued what we could measure, and that meant material wealth. Things that couldn’t be measured—community, dignity, faith, happiness—were largely ignored because they were hard to see, especially from so far away.

We had compassion for those who got left behind, but thought that our job was to provide them an opportunity (no matter how small) to get where we were. It didn’t occur to us that what we valued wasn’t what everyone else wanted. They were the people who couldn’t or didn’t want to leave their town or their family to get an education at an elite college, the people who cared more about their faith than about science. If we were the front row, they were the back row.

Had I asked people in my hometown why they were still there, I would have received the answer I heard in neighborhoods from Cairo to Amarillo to rural Ohio. They would have looked at me like I was crazy and said, “Because it is my home.”
When communities and towns are destroyed, partly because of the front row’s policies of globalization, the front row solution is, “Well, just move.” What matters is growth at all costs—even if it is brutal—and that requires everyone, always, to be economic migrants. The front row likes to say that the U.S. is a country of migrants, where people have always moved for jobs. It has been done before—the Dust Bowl, the northern migration of African Americans. But those migrations were responses to failure, not signs of success.