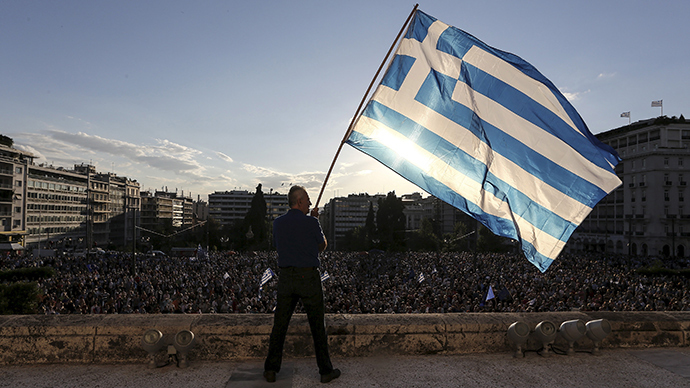 Born of Necessity, Blindness, or Strategy: On Greece and the Bureaucratically Divine

“The force of the machinery in which the K. of The Trial is caught lies precisely in this appearance of necessity on the one hand, and in the admiration of the people for necessity on the other. Lying for the sake of necessity appears as something sublime; and a man who does not submit to the machinery, though submission may mean his death, is regarded as a sinner against some kind of divine order.… It has been characteristic of our history conscious century that its worst crimes have been committed in the name of some kind of necessity or in the name--and this amounts to the same thing--of the ‘wave of the future.’”

-- Arendt, “Franz Kafka: A Revaluation (On the occasion of the twentieth anniversary of his death)”, Partisan Review

Necessity signifies the absence of choice; therefore, freedom and necessity, as principles, are logically opposed. Enlarging the concept of simple necessity, imagining it as a type of perpetual motion “machinery” or “the ‘wave of the future’ amplifies this opposition. Necessity as “progress,” or providence, becomes a deterministic force that would take away our capacity to shape our human world and future. Arendt’s concern in this passage is not, however, the myriad ways in which real human needs restrict sovereign human action. Instead, she points to an ideology of necessity--“the admiration of the people for necessity”--through which human beings abdicate responsibility for their common world by way of false beliefs in their own helplessness in an uncertain world and, simultaneously, their power to control this world using artificial means. Bureaucracy, both symbolically in Kafka’s novels and in Arendt’s appraisal of actually existing configurations, is the tangible manifestation of this ideology.

In this 1944 essay from Partisan Review, Arendt directly engages with The Trial and The Castle by Franz Kafka, whose ideas and images were influential in the development of her conceptual universe, especially with regard to totalitarianism. She claimed that Kafka was a builder of “models” or “blueprints” which “expose the naked structure of happenings” instead of providing a platform for literary escape. These two novels revealed many of the fundamental features of bureaucracy that she would later discuss as an essential component of totalitarian government in The Origins of Totalitarianism. A scene from the 1962 film adaptation of Franz Kafka's The Trial. (Source: Hodgsonson)[/caption]

At the time of its original reception, Arendt notes that audiences indeed understood The Trial as a critique of the pre-war Austrian bureaucratic government, but they did not think this link sufficed to explain the horror that took place in the story. They looked instead for deeper explanations of a quasi-religious nature. They did not see Kafka’s point that the power of bureaucracy, on its own, involves a belief in “the laws of society as though they were divine laws--unchangeable through the will of men.” The problem he highlights in the story is not that bureaucracy can be supported by some “terrible theology” to dangerous effect, but rather that “deification,” or the “pretense of representing a divine necessity,” is inherent in bureaucracy itself (Partisan Review). The focus, Arendt explains, is not the institutional structure of bureaucracy but rather this form of bureaucratic thinking as absolute belief, which becomes a self-fulfilling prophecy.

Arendt, with Kafka, emphasizes the element of arbitrariness in bureaucracy, which she differentiates from “lawfulness.” This may seem like a contradiction in terms since bureaucracy, as Max Weber classically describes it, seeks to apply rules in order to do away with the arbitrary effects of human caprice. Arendt does not disagree, but she adds that it purports to exorcise both caprice and human will by linking us to some external force of truth, wisdom, or providence, like “the laws of history”--or economics. It is the appeal to this external force, then, that provides a legitimacy that allows the bureaucrat to overrule the law. While laws are human made and securely establish the stability of the man-made world, through bureaucracy we hitch ourselves to something transcendent or divine and give up our ability to make laws for ourselves. Bureaucracy must rule by decree and not be held back by human laws because “a law’s inherent stability threatens to establish a permanent community in which nobody could possibly be a god because all would have to obey a law" (The Origins of Totalitarianism).

Arendt’s “god” imagery indicates a realm outside of politics and alludes to Aristotle’s notion of man as “political animal.” In the Politics, he explains that human beings are meant to live among each other as equals, in the sense that they rule and are ruled in turn. This is what it means to be “political,” and someone who does not live among men in this way can only be either a beast or a god, but not human. Arendt uses this reference in order to explain that bureaucracy is antipolitical. Through it, men attempt to become gods and escape the human condition of uncertainty, contingency, and fallibility. If human beings had access to absolute truth, politics could no longer exist in Aristotle’s sense: we could no longer rule and be ruled in turn. Only truth would rule--with absolute necessity--because there can be no argument against it. Truth is coercive. A political caricature of the United States Senate from 1894. Credit: The Library of Congress (Source: The New York Times Opinionator)[/caption]

However, it is also attractive. Truth and fact enable us, for example, to develop techniques that magnify our powers. We use science to discover the true patterns of the universe so that we can make correct predictions and intervene in its course. Yet, we are limited in these capacities, thankfully, because there are limits to determinism, especially in human affairs. Arendt poignantly makes this point, as usual obscuring her optimism behind a thick layer of melancholy: “In so far as life is decline, which ultimately leads to death, it can be foretold.… Only salvation, not ruin, comes unexpectedly, for salvation, not ruin, depends upon the liberty and the will of men” (Partisan Review). Salvation, then, can only be achieved through politics.

It is not ruin, though, that the EU technocrats claim to foretell as the outcome of austerity policies currently foisted upon the Greeks and other Europeans, but rather growth. Ruin would, instead, purportedly be the result of any alternative to the “necessary” measures.

Analysis of the troubled European negotiations process has yielded endless speculation as to the intentions of all parties. Do the technocrats “actually believe” in what they are selling, or are they simply cynical and power seeking? Do the drivers of “the institutions,” or Merkel, or Schäuble actually believe in the technical economic merits of austerity policies, or are they propelled by a vision of economics as morality play? Should we blame the failure of negotiations on an excess of politics, interest, and emotion, or does the problem lie in technocratic blindness to these factors? The answer to the question of motive ceases to matter when we see how the ideology of bureaucracy, as Arendt describes it, allows for the perception and presentation of emotion, interest, and values as neutral and objectively necessary.

The effects of politics and interest actually work alongside and in combination with bureaucracy as opposed to providing an alternate causal interpretation of events. Brussels insists that the continuation of austerity in Greece is not a political choice but rather a question of economic necessity. This is, itself, an example of political strategy at its purest or else the result of sheer (or willful) blindness. In either case, bureaucracy serves to mask--under the cover of neutral, rational judgment--and thereby to legitimize, political action. Thus, the sincerest of intentions and the most cynical forms of manipulation may, in fact, produce the same result, especially when real and fundamental political debate is excluded. With all of this in mind, it becomes possible to understand how Schäuble and others can, with a straight face, denounce Tsipras as emotional and unprofessional and compare Varoufakis to Hugo Chavez, while disguising their own seething anger under a cloak of science and mathematical common sense. Somewhat ironically, it was John Maynard Keynes, the intellectual father of the technocratic welfare state, who originally overthrew the “morality play” idea in economics. He introduced “the paradox of thrift,” according to which saving is not always virtuous and spending is not always profligate and sinful. For him, economics was a technical discipline that had to be kept separate from morality and politics, and he mobilized this view in support of his, at the time counterintuitive, argument that government spending could provide a solution to economic crisis. Yet we are now faced with EU representatives and bureaucrats who have maintained Keynes’ technical rhetoric in order to resurrect the simplistic child-tale vision of things.

This superficially mirrors a source of irony in Arendt’s historical account of totalitarianism: Nazi rhetoric had included a critique of the sterility and bureaucratic legalism of parliamentary government. However, in practice, the Nazis coopted existing bureaucratic structures, and Arendt saw in the resulting totalitarian state the apogee of bureaucratic perversion. The key to both puzzles lies, again, in an understanding of the way in which bureaucracy masks politics and works to bestow the legitimacy of objectivity upon political interests. The discourse of economic “necessity” can serve to translate value positions into seemingly value-less, objective, and therefore legitimate considerations, just as the “necessary” measures imposed by the Nazi bureaucratic machine were used to realize the historical “necessity” of racial Darwinism and not the human laws of parliament.

We should also note that both bureaucracy as a phenomenon and the “German” emotional-moral response--based on an image of debt [Schuld] as guilt [Schuld], which even share the same word in that language--are coping mechanisms. They are ways of managing and making sense of uncertainty and relative powerlessness, which are, ultimately, the perils of freedom. This is a problem that Arendt addresses here with Kafka. It is enticing to think that rational structure might provide us with an escape from the responsibility imposed by human freedom, but in fact, it only provides a cover.

In view of this, the exercise of separating technique and politics, recommended by Keynes, serves an important purpose: it gives us the space to consider the political, value-laden issues, as such, and confront them directly. Economics, even at its best, does not provide “right answers” for the purposes of policy. We can use it, rather, as a more or less effective tool for understanding the implications of various choices, in terms of winners and losers and our ultimate vision as to what our societies should look like and represent. But the choices themselves are political questions of value, for which democratic publics must take responsibility. When values and technique are collapsed into one, political freedom disappears behind the veneer of technical necessity. Political responsibility is not thereby removed. It is only vainly denied.