You may have heard about or Read Deborah Lipstadt's new book on The Eichmann Trial. Amidst some powerful storytelling, Lipstadt offers a powerful Zionist reading of the Eichmann trial and, in the process, takes aim at Arendt. She agrees with Arendt's defense of Israel's right to hold the trial and agrees with Arendt's defense of the importance of the trial for Israel and the Jews. But she also criticizes Arendt on numerous accounts. At times, her criticisms become hysterical and divorced from the facts. She writes that Arendt denies that Eichmann was an antisemite, which would be laughably false if it weren't also widely believed. She suggests  that Arendt's anti-Jewish presentation of the trial was influenced by her enduring love for Martin Heidegger, again an utterly ridiculous premise. And she says that Arendt was, like Eichmann, unthinking--something is hard to take from such a polemical writer as Lipstadt.

Despite wild inaccuracies and self-interested potshots, Liptstadt's book has received much attention, some of it positive. And the book has some positive features. 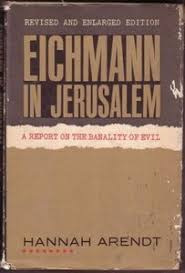 To separate good from bad and to engage the ongoing conversation, The Hannah Arendt Center will be publishing a series of blogs, essays, reviews, and talks that address Arendt's Eichmann in Jerusalem and the controversy it has spawned.

We recently posted a short plea to be sceptical of second-hand mis-appropriations and to read Arendt's book oneself, before one criticizes or defends it.

Here, we post a video of a recent talk by Daniel Maier-Katkin, author of an excellent intellectual biography of Arendt, The Stranger from Abroad.

On July 5, 2011, Maier-Katkin gave a talk at an NEH Seminar at Bard College in which he addresses Lipstadt's book alongside Arendt's Eichmann in Jerusalem. You can watch the talk here.

n.b. The sound is a bit quiet, but very audible, especially if heard with earphones.