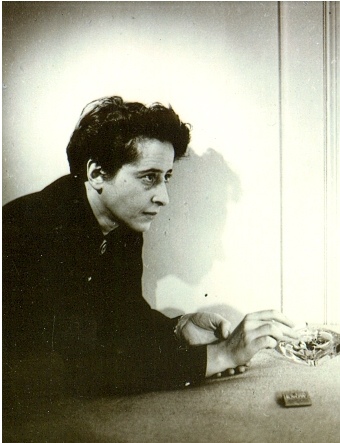 Dialogue with One’s Self

Kate Bracht turns to Hannah Arendt to find a silver lining to our need to be by ourselves during the Corona Virus pandemic. We are all increasingly spending more time by ourselves. One answer is to reach out for companionship through on-line dinner parties and courses. The Arendt Center is now hosting its online Virtual Reading Group weekly and we have made it free for everyone during the pandemic. But Bracht highlights another approach: the practice of solitude. As she writes, Arendt distinguishes solitude from isolation. Solitude, Arendt writes, is to be together with oneself when one is alone and it is, she argues, the condition for thinking.

Hannah Arendt, the celebrated German-American philosopher noteworthy for her love of the world, strove to make sense of horrors such as totalitarianism and the Holocaust. Many of her answers may be useful to us today. In fact, her work suggests that there could be a golden — not just a silver — lining to coronavirus-motivated social distancing, and it lies in the ancient connection between politics and psychology.

Perhaps surprisingly, Arendt ends her masterwork, “The Origins of Totalitarianism,” published in 1951, with a reflection on loneliness. She points out that since ancient times, tyrants have worked to isolate citizens from each other. Sowing separation and distrust among citizens prevents people from acting in concert and generating power that can overthrow tyrannical dominance. What was different, even at Arendt’s time of writing, was the epidemic of loneliness.

For Arendt, isolation was strictly a political experience, the inability of citizens to act together in the public space, generating power. Loneliness was a more existential experience, characterized by the inability to connect with others or being exposed to others’ hostility. Today, loneliness has reached epidemic proportions, especially among young adults.

Paradoxically, Arendt’s antidote to both isolation and loneliness was not togetherness, but solitude. Solitude is different from both isolation and loneliness in that it requires being physically alone, but, in solitude, the self is not existentially alone. The self keeps company with itself, in dialogue with itself. While both loneliness and isolation are marked by disconnection and desertion, in solitude the individual remains connected to herself and the world. In the dialogue of self with self, the solitary individual represents the world to herself. Conversely, the two conversing selves of solitude converge through reconnection with another human being who affirms the solitary individual’s unique, unexchangeable identity.