Divergent realities the Transformation of Facts into Opinions

Hannah Arendt alerted us to the tendency at a time of rootlessness and homelessness for people to seek meaning in movements. The effect is that people will believe the lying consistency of their movement even at the expense of basic facts, something that augurs the ever-present threat of  the loss of a common world. The overall point Arendt worries about is not simply that one version of a lie will win out. Rather, the danger is that amidst the battle over facts, the very belief in the ability to "say what is," to know the world, is put into question. Arendt's worry is that the war over images leads not to the victory of one image over another, but to the victory in cynicism, to the belief that it is simply not possible to speak the truth and say what is:

It has frequently been noticed that the surest long-term result of brainwashing is a peculiar kind of cynicism—an absolute refusal to believe in the truth of anything, no matter how well this truth may be established. In other words, the result of a consistent and total substitution of lies for factual truth is not that the lies will now be accepted as truth, and the truth be defamed as lies, but that the sense by which we take our bearings in the real world—and the category of truth v.s. falsehood is among the mental means to this end—is being destroyed.

It is not hard to see Arendtian musings about cynicism and the loss of a common world in today's politics. Conservatives, as Sam Tanenhaus—the conservative editor of the NY Times Book Review argues in his book The Death of Conservatism—have taken on the trappings of a movement, valuing consistency and power of facts and political engagement in a common political world.

One example of a divergent reality that strikes me daily is that amidst the economic wreckage of the last 3 years, I personally know hardly anyone who has been permanently out of work for 2 years or more. I certainly know many who have lost their jobs and have suffered, but they have found new ones and generally they are still drinking lattes at Starbucks. The same is true for most of my friends—I ask and almost no one knows the legions of unemployed.  In the neighborhoods I live in in NYC and in the Hudson Valley, the tony restaurants are crowded and the surfeit of shoe stores and banks are still in business.

George Packer offers an example of the other worldliness of our times in his good essay on the dueling realities in The New Yorker. Packer describes Danny Hartzell, out of work or underemployed for years, whose economic life has come crashing down around him and who is one of the 16.2% of Americans out of work--according to the more accurate "real" unemployment figures. Whole communities in parts of the country are struggling and suffering, and yet in the world of the highly educated, the recession is often simply a matter of changing jobs. In Washington, the debate surely shows which world the politicians are living in.

There is another way in which Packer's essay raises the specter of dueling realities. He invokes Max Weber's famous distinction between an ethic of responsibility and an ethic of ultimate ends, association the former with President Obama's pragmatic effort at compromise and the latter with the Republican's "raving mad" posture of "juvenile righteousness." Seems right.

Then  I happened to find a copy of the Wall St. Journal at Starbucks, so I read it, the editorial inclusive. There I found the following points made:

1. The president "remains far more interested in maneuvering to blame a default or credit downgrade on Republicans than in making himself part of any plausible solution to a crisis he insists is imminent."

2. "it has long been clear that Mr. Obama isn't interested in spending reform. In February he proposed a budget that spent more than any in U.S. history. In April he demanded that Congress pass a "clean" debt ceiling hike that included no spending cuts whatsoever. Only after House Republicans unveiled their own sweeping budgetary reforms did the White House rush to also claim it wanted deficit reduction as part of the debt-ceiling debate."

3.  "The President insists his party is offering serious spending cuts and entitlement reform. He also likes to talk about "balance," which to him means real tax increases immediately and speculative spending cuts some time in the distant future. Behind the scenes the White House has only ever agreed to token reform and cuts. Here's a number for the debt history books: Mr. Obama's final offer in the Biden talks was a $2 billion cut in 2012 nondefense discretionary spending. The federal government spends more than $10 billion a day." 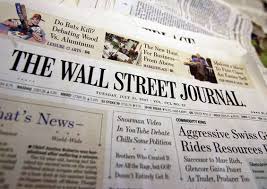 Compare this with Packer:

President Obama, responsibly acceding to the reality of divided government, is now the leading champion of fiscal austerity,...

And compare it also with a recent NY Times editorial:

Mr. Obama, in fact, had already gone much too far in trying to make his deal palatable to House Republicans, offering to cut spending even further than the deficit plan proposed this week by the bipartisan “Gang of Six,” which includes some of the Senate’s most conservative members. The White House was willing to cut $1 trillion in domestic and defense spending and another $650 billion from Medicare, Medicaid and even Social Security.

There are a few things I find interesting about these contrasting views.

1. Packer and the Times on one side (should I say the left?) and the WSJ on the right (admittedly so) are both claiming the mantel of centrist pragmatism, Weber's "ethic of responsibility."

2. Depending on whether you live in The New Yorker's and The New York Times' reality or the Wall St. Journal's reality, you probably see the real world quite differently. You actually see it otherwise, with different facts and different realities. The nation's two most respected newspapers and probably its most respected weekly present such completely divergent factual pictures of the world, that people who read the one can barely have a meaningful conversation with people who read the other.

3. To read both the NY Times and the WSJ on the same day is to  have very little ability to tell which one is closer to a factual reality--it is, really, to enter a weird situation in which the claim of a common world begins to break down and the confidence fades that there is some truth, that someone can with authority say what is. The point is, that when facts become reduced to opinions, it is almost impossible to talk meaningfully with one another, let alone to have an intelligent political discourse. There is nowhere, it seems, to turn for facts when all facts are simply one sides' opinion. I can trust the NY Times more than the WSJ, or vice versa, but it is incredibly difficult to actually discriminate between fact and opinion. This makes a mature political discourse nearly impossible.

It is precisely the reduction of facts to opinions that Hannah Arendt so worried about in her essays Lying in Politics and Truth and Politics. And it is the question of how, and also if, we can re-animate a culture of fact in our world that underlies the Arendt Center's upcoming conference, Truthtelling: Democracy in an Age Without Facts. You can see the program here. And register here.