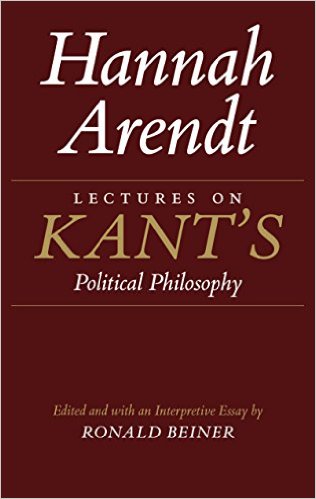 Enlarged Thought in Arendt and Kant

"The greater the reach — the larger the realm in which the enlightened individual is able to move from standpoint to standpoint — the more 'general' will be his thinking. This generality, however, is not the generality of the concept — for example, the concept 'house,' under which on can then subsume various kinds of individual buildings. It is, on the contrary, closely connected with the particulars, with the particular conditions of the standpoints one has to go through in order to arrive at one's own 'general standpoint.'"

In her Kant Lectures, Arendt draws a bold vision of Kant's political philosophy out of the Enlightenment thinker’s Critique of Judgment. Famously, Kant turns to aesthetics after having revolutionized the theory of knowledge in The Critique of Pure Reason, and moral philosophy in the Critique of Practical Reason.

Arendt chooses to go to this study rather than Kant’s later political writings of the 1790s for his true political philosophy. She justifies this choice by highlighting passages from the third critique that struggle with the question of the social, what she elsewhere calls the plural, nature of the human. Scholars are particularly fascinated by Arendt’s take on Kant's phrase "enlarged thought" from section 40. In a time of continued emphasis of specialization and emphasis of instrumental knowledge, the phrase itself recalls a broader sense of learning. Depending on your frame of reference, it might remind you of the democratic citizen of Athens, or bring up nostalgia for the Renaissance man. Through Kant, though, Arendt does not advocate going back to a time when less specialized knowledge was enough. Instead, she account for an expanded movement of thinking within a realm where individual perspectives constitute the common world.

Through Kant, Arendt shifts the meaning of the word 'general.' In this context it is not a top down category that allows us to unite disparate perceptions. For example, a house that refers to shelter for a family in contrast to an office tower or hospital. Instead, it goes to specific contextualized standpoints.

Comparing the specific language Arendt uses in her interpretation to Kant's original formulation allows us to specify the narrative dimension in her sense of enlarging. Kant uses 'enlarged thought' in the context of a detour from aesthetic judgment per se into three “maxims of common human understanding.” He lists the second of these as “To think in the position of everyone else,” which he then paraphrases as a “erweitert[e] Denkungsart.”

When Arendt writes of "the standpoints one has to go through," she brings out a tension between rhetoric movement and arrival. On the one hand, in contrast to Kant the quote emphasizes moving from standpoint to standpoint. On the other hand, Arendt speaks of arriving at the general standpoint, as if it were a stable destination. This seems to align with the size of the 'realm' one works within.

I'd like to suggest that Arendt's thinking be considered to have a narrative component. We have to move through different mindsets and link them together in a temporal sequence. Since enlarged thought does not really reach a static goal, it might be better termed 'enlarging thinking.' The key point is not so much the absolute length of the "reach" so far, but the continuing practice of moving from particular to particular. Aesthetics has a role to play here in its thinking of time through narrative.

The current presidential campaign season in the U.S. once again raises the question of the standard of democratic participation. One might, in a parallel with liberal economic theory, vote for a candidate out of self-interest and hope that the voting process evens out particular desires. Or one might hold to an abstract ideal of right or wrong and promote that idea for all. While in other texts Arendt champions the process of action as coming together to start something new, "enlarged thinking" offers a more reform-oriented mode of change. While traversing the positions of others, one draws them in and processes them. The thinker would thus leave self-certain identity behind but also not loose touch with worldly specifics.