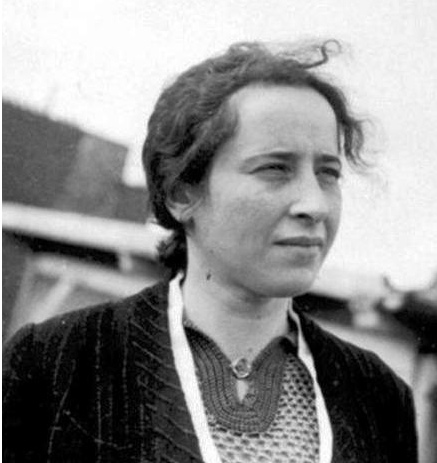 Hannah Arendt and The Poetics of “The Pursuit of Happiness”

It is neither customary nor wise to tell an audience, and least of all a learned audience, about the incidents and stories around which the thinking process describes in circles. It is much safer to take listener and reader along the train of thought itself, trusting to the persuasiveness inherent in the succession of things, even though this succession hides as well preserved the original source out of which the thought process arose and from which it grew.

Hannah Arendt, “Action and the ‘Pursuit of Happiness’”

“The pursuit of happiness” must be the most poetic phrase in the Constitution. Of course, the language throughout is elegant, the “felicity of pen” of Thomas Jefferson. However, his way about the pursuit of happiness grabs me by the heartstrings.
No doubt this term lifted from Kant’s, “life, liberty, and property’ drew Arendt’s attention. This essay, one of many in the collected volume, Thinking without a Bannister, demonstrates Arendt’s facility with poetic language. It is no shock to me that she was also a skilled poet, and fast friends with Auden.

Historically, my understanding is that the “pursuit of property” was tweaked into “pursuit of happiness” because the colonies didn’t have the land to reward those who fought. George Washington had to quell a near rebellion (The Pennsylvania Mutiny of 1783) when the soldiers planned to revolt over lack of war pay. It may be the utilitarian in me that thinks our Forefathers didn’t want us to expect we were owed anything by “pursuit of property.”

The problem is in the execution of this elusive happiness. It’s in the elasticity of words – perhaps a pure issue of semantics. The melodic, enchanting sound of “pursuit of happiness” leaves much open to interpretation. Howard Mumford Jones said the pursuit of happiness is, “the ghastly privilege of pursuing a phantom and embracing a delusion.” This applies to the pursuit of happiness as it does in the poetry of Dante, Milton, and Moby Dick by Melville – Ahab on his doomed quest to find his prey. Such is the hardship and disillusionment of Americans today trying to get a firm hold on that “happiness thing” we all hear so much about.

Hannah Arendt says: It is neither customary nor wise to tell an audience, and least of all a learned audience, about the incidents and stories around which the thinking process describes in circles.

So how do we educate the public on this issue of happiness?

I believe it equal parts poetry and philosophy. In the quote that opens this essay, Arendt cautions the speaker to approach the audience in a swivet of circular ideas. Beliefs, like religion or politics, tend to operate in the motion of a flushed toilet. Around and around and around with no one changing their mind. Armor is strapped on and barbs are immediately loaded. That is no way to communicate. The poet must approach the public the same, careful, succinct way by removing the sting of the “circular arguments” (such as “I think therefore I am”) and couch it in verbiage less abrasive. You must cajole and woo the listener away from the brash subject matter by kissing it with metaphors. If you want to educate the hardheaded, you must gently trick them. (That may be more poetry than philosophy,)

It is easy to reflect on these things from afar. Hindsight is always 20/20. What if Ralph Waldo Emerson’s “transparent eyeball” was taken off the trees and applied to people? Absorb ideas, feelings, opinions, the reader, and the listener. Perhaps it is within complete empathy that we find a natural state of happiness.

Our Forefathers couldn’t find the happiness that was so brand new it should be on the wind in all directions. It was not. “Only John Adams was bold enough to make the enjoyment of power and public happiness the cornerstone of his political philosophy.” John Adams was not well-liked. It seems that he could no more help citizens along the yellow brick road to contentment. That’s because, as then, as in Arendt’s day, as in our own, the pursuit of happiness is a flight of fancy;
It is much safer to take listener and reader along the train of thought itself, trusting to the persuasiveness inherent in the succession of things, even though this succession hides as well preserved the original source out of which the thought process arose and from which it grew. –

Again, this is not only the best philosophical way to reach people, but it is the foundation of poetic communication. Poets taunt the reader along, innocently, calm, connecting stanzas as train cars of thought. One simile, a line enjambment, an internal rhyme that keeps the peace. You get your point across in a new turn of phrase to reintroduce the Source of knowledge.

Hannah Arendt is an active participant in the observation of society, its foils, and half-baked thoughts. Her ideas are brave, and she took a beating in her time. What makes her immortal is that her ideas stand. Her grace stands. Her poetic genius stands.

It does not strike me as odd that philosophy and poetry share DNA. In certain schools, both strive to delve out the secrets of unanswerable metaphysical questions. The pursuit of happiness is right up there.
Clifford Brooks is founder of the Southern Collective Experience and Editor-in-Chief of the Blue Mountain Review. He hosts Dante's Old South on NPR/WUTC and This Business of Music & Poetry. He has three books of poetry: The Draw of Broken Eyes & Whirling Metaphysics, Athena Departs, and Exiles of Eden. He currently bounces around Georgia writing his new collection, The Book of Old Gods. His poetry/fiction hybrid, The Salvation of Cowboy Blue Crawford, is due out in the spring of 2022.