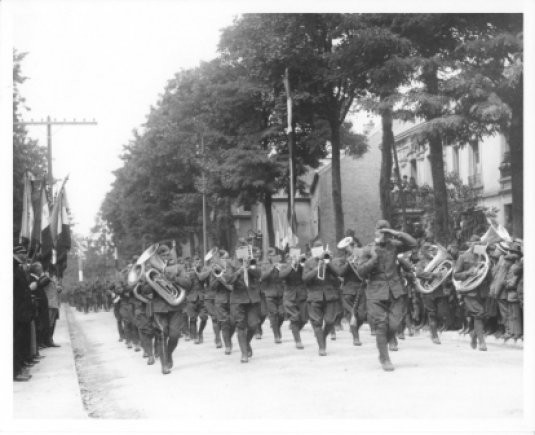 Hannah Arendt and World War I: On statelessness and the rise of totalitarian regimes

100 years ago on this day, U.S. President Woodrow Wilson issued a message to address his “fellow countrymen” reflecting on World War I:

A year ago today our enemies laid down their arms in accordance with an armistice which rendered them impotent to renew hostilities, and gave to the world an assured opportunity to reconstruct its shattered order and to work out in peace a new and juster set of international relations.

Hannah Arendt was thirteen years old at the time. Her analysis of the people who had become stateless — the masses of refugees in Europe after the war ended in 1918 — remains outstanding to this day as she placed the problem of stateless people and refugees in the center of her analysis of totalitarianism. In the homeless and stateless she saw a massive failure of the nation states as these “superfluous” people did not belong to any political community and were therefore outlawed. This marked the beginning of the disastrous rise of a totalitarian movement that reached its peak in the annihilation of “superfluous” people. The mass phenomenon of statelessness 100 years ago revealed the impotence of human rights protection. In “Origins of Totalitarianism”, first published in 1951, Hannah Arendt writes:

Antisemitism […], imperialism […], totalitarianism […] — one after the other, one more brutally than the other, have demonstrated that human dignity needs a new guarantee which can be found only in a new political principle, in a new law on earth, whose validity this time must comprehend the whole of humanity while its power must remain strictly limited, rooted in and controlled by newly defined territorial entities.[1]

The refugee crises of the 21st century have displaced more than 70 million people worldwide. “More than a third of the world’s displaced population — some 25.9 million people — have been forced to flee their own countries entirely, leaving familiar lands behind. Over two-thirds of those refugees come from just five countries: Syria, Afghanistan, South Sudan, Myanmar and Somalia.” [2] The number of refugees in the world is directly linked to the number of wars and human-rights-abusing dictatorships. In her essay “We refugees”, Hannah Arendt who was expatriated by the NS regime in 1937 and lived as a stateless person until she received the US citizenship in 1951, states that a refugee

… used to be a person driven to seek refuge because of some act committed or some political opinion held. Well, it is true we have had to seek refuge; but we committed no acts and most of us never dreamt of having any radical opinion. With us the meaning of the term “refugee” has changed. Now “refugees” are those of us who have been so unfortunate as to arrive in a new country without means and have to be helped by Refugee Committees.[3]

Parallel to the enormous migration crisis that we have been experiencing, a massive increase of the political far right — not only in Europe but also in the U.S. is taking place. Statistics show that Trump voters tend to be strong supporters for reducing immigration.[4] The Trump administration’s goal, guided by former attorney general Jeff Sessions and current attorney general William Barr, was and is to transform the immigration system making it very hard or impossible for applicants to come to the U.S. So far, measures include setting a quota to increase the number of people removed from the U.S. as well as hiring two hundred new judges with plans to add more, half of the new ones are former attorneys for ICE. [5]
Just like far right parties such as “Alternative für Deutschland” in Germany, “Rassemblement national” (or until 2018 “Front national”) in France, “Prawo i Sprawiedliwość” in Poland, “Lega Nord” in Italy etc., the message is usually the same: immigrants would invade the homeland, bring chaos and crime, take away jobs, threaten safety as well as national culture and tradition.

Behind this narrative of the “dangerous migrant” is a disinformation machine that cultivates the powerful climate of anti-immigration. Unlike the scenario 100 years ago, when nationalism was closely linked to the trial of strength between great powers, we can see a trend that is an irony in itself: the globalisation of nationalism. The target audience in this scenario is the “dissatisfied” citizen — the poor, the struggling while the migrant becomes the easy scapegoat and the powerful more powerful.

Regulated immigration manifested in laws is of importance for every nation, however, the current US administration’s immigration policies are fundamentally based on race and class using fear as tool to influence its citizens — islamophobia being one of them.[6] The issue of migration replaced social questions and racism became the foundation of this nationalism. According to Étienne Balibar,

… nationalism emerges out of racism, in the sense that it would not consti­tute itself as the ideology of a ‘new’ nation if the official nationalism against which it were reacting were not profoundly racist: thus Zionism comes out of anti-Semitism and Third World nationalisms come out of colonial racism.[7]

Racism, in turn, has nothing to do with biological “races”. Balibar explains that it is a historical or cultural — product, while avoiding the equivocal position of ‘culturalist’ explanations which, from another angle, also tend to make racism into a sort of invariant of human nature. It has the advan­tage of breaking the circle which traces the psychology of racism back to explanations which are themselves purely psychological.

In his message, Woodrow Wilson also touches upon the psychology of the lean years that followed WWI: ”Hunger does not breed reform; it breeds madness”. War breeds stateless people. As we live in an increasing globalized world with complex migration and immigration scenarios of different political contexts, Hannah Arendt made an overarching point: the link between statelessness and totalitarian regimes.

On October 15th, the US government issued a law that bars immigrants from obtaining a visa or seeking renewal if they had received government benefits, such as Medicaid, food stamps, or Section 8 housing vouchers, or if they would likely need them in the future.

On this Veterans Day, as we remember the men and women who have served, we read Hannah Arendt’s “Origins of Totalitarianism” as a reminder that we ourselves create refugees and therefore, are responsible for their protection. Hopefully, future US governments will act more along the lines of what Woodrow Willson said 100 years ago:

… to work out in peace a new and juster set of international relations.