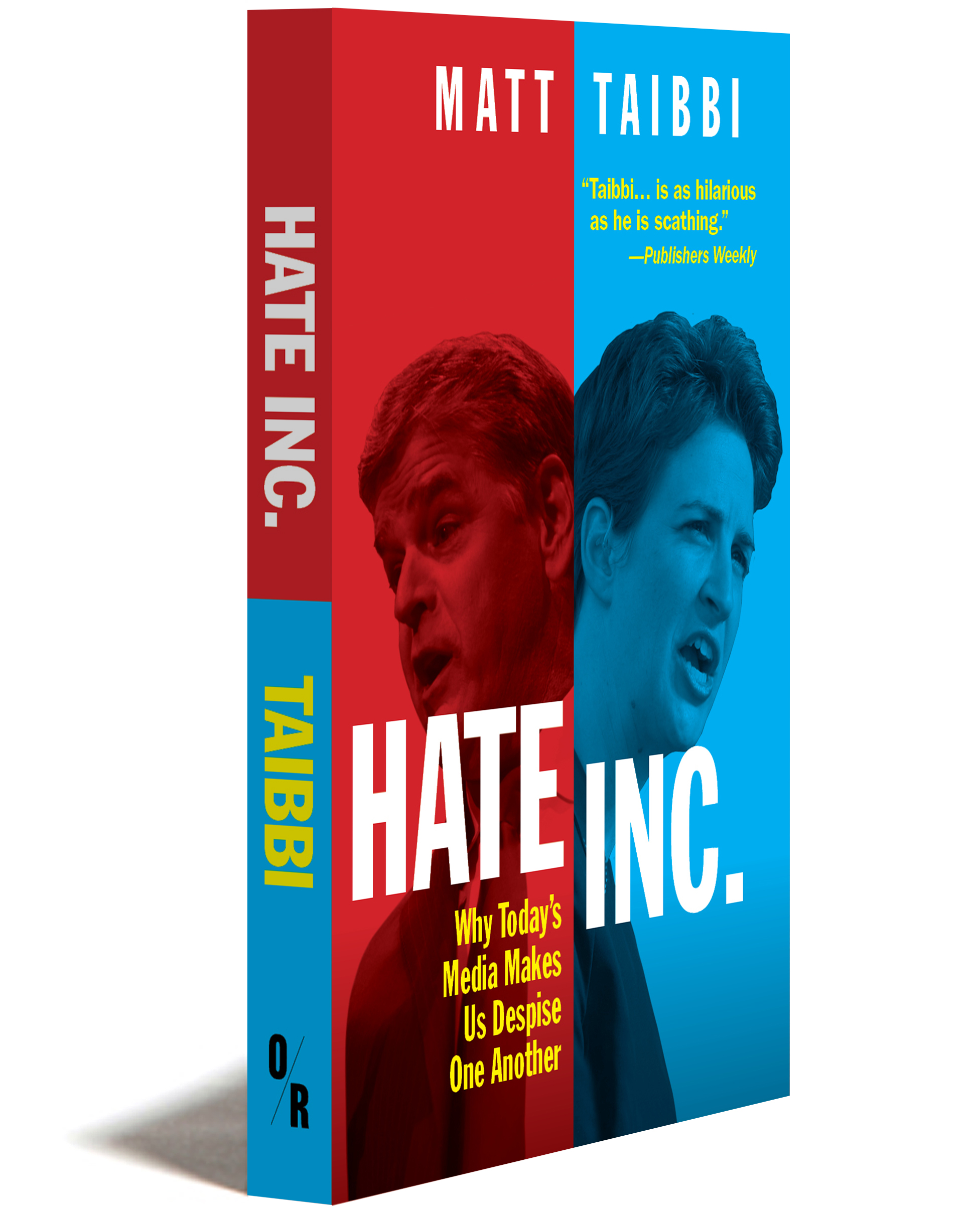 Matt Taibbi is publishing his new book Hate Inc.: Why Today’s Media Makes Us Despise One Another alongside a series of emails. (The emails are available by subscription.) In his inaugural post, Taibbi describes why the cover of his book includes Rachel Maddow alongside Sean Hannity. Taibbi argues that Maddow is the poster-person for the rise of hate-filled journalism on the left, but he offers some praise for Maddow and argues that almost all of those journalists now criticizing her are guilty of much of the same excesses, irresponsibility, and hate mongering that she practiced.

Rachel Maddow is not on the cover of this book because of anything she did by mistake, because Russiagate turned out to be a bad guess.

She’s on the cover because of what she did on purpose, with the core concept of both her program and her public image, before the Russia story. She transformed from a sharp-minded, gregarious, small-time radio host to a towering patriotic media cudgel, a depressingly exact mirror of Hannity.

Because I still live in the New York area, because most of my friends vote Democratic, and because I work for a liberal-leaning magazine, I heard much protest and rending of garments when the proposed cover art for Hate Inc. was released, showing Rachel Maddow sharing top billing with Sean Hannity. “How can you even compare Rachel Maddow to Sean Hannity?” people barked. It’s preposterous! Unforgivable! A cheap hot take!
No, it’s not. The two characters do exactly the same work. They make their money using exactly the same commercial formula. And though they emphasize different political ideas, the effect they have on audiences is much the same.

The major difference is one is smarter than the other, which is not actually a mark in Rachel’s favor. If anything, it’s a check against her. Sean Hannity’s one-note brain (seemingly located in his neck) and relentless enthusiasm for high-volume blame-seeking appear genetic, deficits he was born with to help him become a perfect Anger-TV pitchman.

Rachel had to think her way into this job. She’s smart enough to know better.”

Taibbi reflects on Maddow and Hannity as latter day exemplars  of Larry “Lonesome” Rhodes, an idealistic reporter turned populist pundit in the 1957 Elia Kazan film “A Face in the Crowd.”* Progressives have made much of Kazan’s film as predicting the “power of media to use non-intellectual cues and personality to deliver votes in great sacks.” The idea is to dupe low-information voters into supporting candidates that oppose their interests. But Taibbi argues that the affective power of the media works on so-called intellectuals as well:

It isn’t just rubes who can be taken in. The college-and-coffee crowd is just as susceptible to brand-over-thought come-ons, and can even fall for appeals to fear and patriotism. The pitchman will be different, but it will still be a pitch.

*Ed. note: the original article referred to this movie as "On the Waterfront." We have corrected it to "A face in the Crowd."