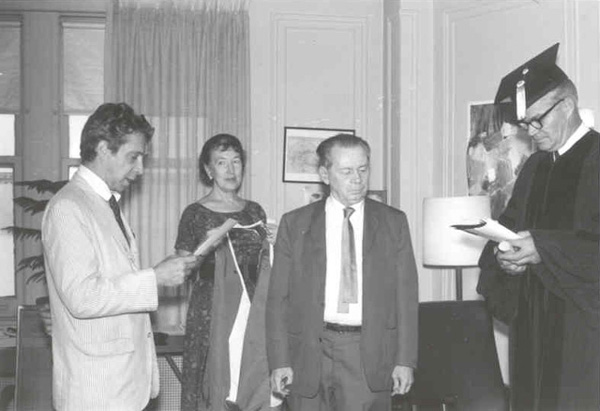 Hannah Arendt’s husband Heinrich Bluecher was an exceptional and much admired teacher of philosophy at the New School for Social Research and Bard College. Bluecher came from a different generation. He never earned a doctorate, or published. He was what Arendt called a “Socratic character.”

In addition to being an unlikely professor, Bluecher had a controversial teaching style. He was, in a certain word, old-fashioned. Some saw him as a charlatan, but others like the poet Theodor Weiss were enthusiastic. His former Bard students—Daniel Pinkwater, the photographer Arthur Tress, and the artist Carolee Schneemann—all described Bluecher as very influential.

So, what did he teach and talked about?

While we have no written record of Bluecher’s lectures, his students recorded him on tape. After his death, Hannah Arendt made intensive efforts to have the tapes transcribed and published. Nevertheless, a publication could not be realized during her lifetime. Arendt bequeathed the tapes and typescripts from her efforts to Bard College. A part is already digitized and accessible here: (http://www.bard.edu/bluecher/). Another large part is being indexed and arranged, but is not available yet.

In 2019, I started a research project on Bluecher’s teaching. I spent several weeks in the Bluecher Archive at the Stevenson’s Library at Bard. It’s my pleasure to share the first publications from my archival work.

The open access webpage www.bluecher-project.com presents Bluecher’s lecture series “Sources of Creative Power,” which was given in 1953/54 at the New School. The series contains  Bluecher’s core philosophical thoughts. In an effort to make the webpage accessible, you will find different formats for audio files from original tapes, and transcripts which were made in the 1950s and 1970s from Bluecher’s students. Additionally, the files are newly edited and completely searchable. I’ve teamed up with students from Leipzig University to produce eight short podcasts that give an introductory overview of Bluecher’s lectures.

For the first time Bluecher’s lectures can be experienced by a public audience. And those who want to have a better sense of Hannah Arendt’s companion in thinking and writing will be able to get a sense of Bluecher himself.

Ringo Roesener is postdoc at the institute for cultural studies at Leipzig University. He teaches in the field management for the arts. Currently, he researches on Heinrich Bluecher, husband of Hannah Arendt, and on Juergen Baldiga, photographer and diarist of the queer subculture in Berlin of the 1980s and 1990s. Roesener is author and co-director of the documentary »Among Men. Gay in East Germany« (2012) and author of the book »Freundschaft als Liebe zur Welt. Im Kino mit Hannah Arendt« (2017).  He received his Ph.D. in philosophy at the Albert-Ludwigs-University Freiburg and his M.A. in cultural studies, theater studies, and economics at Leipzig University.