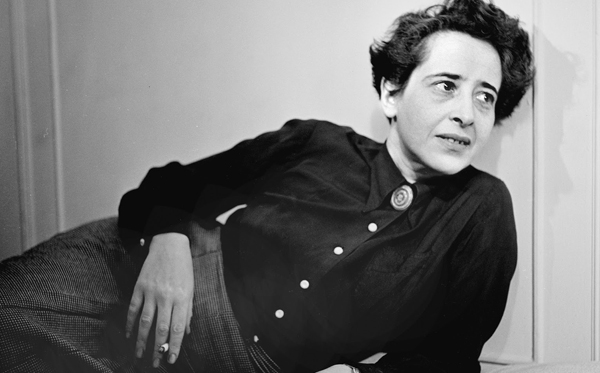 “How is possible to learn something new from history?”[1]

12-18-2019
It is well-known that Hannah Arendt was a German Jewish political theorist who dedicated her life to understanding the meaning of political action in human life. During the interview “Zur person” with Günther Gaus, Arendt points out that her interest in history and politics started in 1933. She took part as a political actor recompiling antisemitic statements; she was arrested and forced to emigrate from Germany the same year. However, her concerns about history preceed 1933, and can be traced particularly to 1926, where she dedicated a letter to her professor Karl Jaspers saying the following lines:” I can understand history only from the perspective which I myself occupy […] How is it possible […]to learn something new from history?[2]
Arendt kept this question in her mind throughout her life. Her reader can come up with a new concept of history differently from the traditional view, which shows us history as the science which studies the past. From my perspective, Arendt replies to this question in The Human Condition, which is where, she brings to light this perspective of beginning and its connection with the concepts of action and history. For her, every human can act bring new beginnings into the world. The capacity of action is unique between Labor and Work because it represents freedom, plurality, and history for Arendt.

Labor, work and action are the three activities of vita activa in The Human Condition. “They are fundamental because each corresponds to one of the basic conditions under which life on earth has been given to men”[3]. In simple terms, labor is the activity dedicated to the satisfaction of biological needs. Human beings produce goods and all the necessary things we need to survive and keep our bodies alive. Human beings are Animal laborans because they are involved in the biological and cyclical process of nature. The cyclical process doesn’t have a beginning or an end because men are part of the cyclic movement of nature, which is in constant repetition. Even though the human body disappears from the world, humans cannot do away with nature.

Work is the activity focused on fabricating things that make up the human artifice. Most of them are objects of use with durability. Another important characteristic of this concept is that work is determinate by means and ends. In the same way, humans are Homo Faber their principal task is to transform nature in the material. In this aspect, the Homo Faber is violent with the natural world.

The third activity in vita activa is action. Action and speech are two inseparable activities in which individuals can experience freedom. As I mentioned, Animal Laborans must attend metabolic needs and, the Homo Faber follows a process of production to build the material world. None of these two activities, let humans show their identity in the public sphere. In Arendt’s words: “To act, in its most general sense, means to take and initiative, to begin […] This beginning is not the same of the beginning of the world, is not the beginning of something but of somebody, who is a beginner himself”[4].

From Arendt’s perspective, humans are beginners. It means that they are in the world not to die but to begin and to experience a second birth. The second birth is not a natural phenomenon. Conversely, it is the start of their political and historical life because action creates history and stories. In the same way, it contains the identity of the agents who cannot completely know the effects that their acts and words will generate in the future.

The agent’s identity “appears so clearly and unmistakably to others [but] remains hidden from the person himself “[5]. Action has an important revealing character and it requires the presence of speech. In Arendt’s words speech “corresponds to the fact of distinctness and it’s the actualization of the human condition of plurality.”[6] It is not a mean of communication; its role is not based on utility. By contrast, it permits agents to show who they really are and create a public sphere. Another important peculiarity of action is its boundlessness. In contrast to Work, the action is unending. It is not determinate with a method or with the category of means and ends.

The impossibility to realize the action’s effects, its boundlessness and the reveling character which creates a memory, are relevant elements that create history because we can only know who someone is when we tell a story about whose life. For Hannah Arendt, history is not a chronological narrative of facts and dates. In the Human Condition, she mentions two meanings. Firstly, the story refers to the events that we live in our existence. It is not produced, and it doesn’t have an author. Secondly, history is written by the storyteller and historian. We can observe it in narratives and historiography. Both meanings are the outcome of the action that reveals itself to the eyes of the storyteller and historian. Given all that, the question is: What is the link between the explanation and the Arendtian question?

We can learn something new from history if we recognize two important details. Firstly, the human condition of natality. This notion has a powerful meaning in the concept of history. It confronts the idea which signalizes history as the study of the past, one past too distant from our eyes. The natality or the capacity to begin a political and historical life invites us to think history as the science of beginnings because every man is a beginner and not an individual determined by death.

The sense of history is not mortality but natality. It is crucial to contemplate that we cannot eliminate the events that our predecessors have created in the time. However, it is possible to recreate our gazes to it and take responsibility for the events that others have inherited to us. History doesn’t have a specific end; its only conclusion is human extinction. I consider that Arendt disagrees with some philosophers of history who assume that history ends with the triumph of the proletariat, the Absolute Spirit and the progress because she believes that history doesn’t have an end.

Secondly, the capacity of action, which is not just historical, it’s also political and represents the creation of the public sphere and freedom. The historian and the storyteller who identifies the actions are humans with the capacity to act in the world. Arendt reminds us, the intellectual is not an isolated human from the world. On the contrary, intellectuals have the responsibility of being part of their context. In The Human Condition, one of her critics to Plato is the separation between thought and action. He “was the first to introduce the division between those who know and do not act and does who act and do not know”[7]. Arendt is concern about the separation between the vita activa and the vita contemplative.

From her point of view, individuals can act and understand. In her essay Understanding and Politics, she emphasis the connection of both concepts: “If the essence of all, and in particular of political, action is to make a new beginning, then understanding becomes the other side of action, namely, that form of cognition, distinct from many others, […]eventually can come to terms with what irrevocably happened and be reconciled with what unavoidably exist.”[8] Understanding is not a method to obtain knowledge about politics or history. Understanding is “specifically the human way of being alive”. It is unending as action and cannot produce precise results as knowledge. This faculty helps us to be reconciled with the events that occurred before our coming to the world. To reconcile is a way to make sense to all those chaotic events which surround us. In the same way, it permits us to create new beginnings and learn something new from history.

I consider that the Arendtian proposals of history and action beckon us to analyze the responsibility of the historian, who before doing his job is a citizen of the world. On top of this, Arendt invites the historian to think of their discipline as a link between action and thought. The intersection between action, new beginnings, and history is undoubtedly important in Hannah Arendt’s Human Condition. She is not just a political theorist. She is a philosopher of history and her proposals are unique among other thinkers. From my point of view, we can find in Hannah Arendt’s thought a new proposal to study history creatively: as the beginning of someone new and something new. This conception does not imply a total rupture with the past. Conversely, it means taking responsibility to create new beginnings in history and gaze at history as beginnings.
Endnotes
[1] A Diocelina Jaimes Lara por su incondicional amor y apoyo.
I am grateful to The University of the Underground and The Hannah Arendt Center for Politics and Humanities at Bard College for had allowed me to take part in their summer program’ Post Nation States´. One space inspired by Hannah Arendt’s thoughts. In the course, I found a new space of reflection.
[2]Arendt, H., Jaspers, K., Köhler, L., & Saner, H. (1992). Hannah Arendt/Karl Jaspers Correspondence, 1926–1969. Chicago: Harcourt Brace Jovanovich.p.3.
[3]Arendt, H. A. (1998). The Human Condition: Second Edition (2nd ed.). Chicago: University of Chicago Press.p.7.
[4]Ibid., p.177.
[5]Ibíd., p. 179.
[6] Ibíd., p.178.
[7] Ibíd., p.223.
[8] Arendt, H., & Kohn, J. (2005). Essays in Understanding, 1930–1954: Formation, Exile, and Totalitarianism. Chicago: Schocken Books.p.321–322.

Denisse Mendoza Jaimes is a History Undergraduate Student at The National Autonomous University of Mexico (UNAM). Nowadays, she is writing herdissertation: Action and Understanding as the history grounds. Historiographical analysis on The Human Condition by Hannah Arendt.