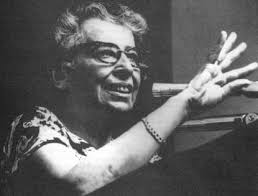 In The Human Condition, Hannah Arendt laid out her concept of the polis — literally, an ancient Greek city state, but defined more broadly in Webster’s as “a state or society especially when characterized by a sense of community” — as a departure from the ancient understanding of the term:

The polis, properly speaking, is not the city-state in its physical location; it is the organization of the people as it arises out of acting and speaking together, and its true space lies between people living together for this purpose, no matter where they happen to be. “Wherever you go, you will be a polis”: these famous words became not merely the watchword of Greek colonization, they expressed the conviction that action and speech create a space between the participants which can find its proper location almost any time and anywhere. It is the space of appearance in the widest sense of the word, namely, the space where I appear to others as others appear to me, where men exist not merely like other living or inanimate things but make their appearance explicitly.

This space does not always exist … . To be deprived of it means to be deprived of reality, which, humanly and politically speaking, is the same as appearance. To men the reality of the world is guaranteed by the presence of others, by its appearing to all; “for what appears to all, this we call Being,” and whatever lacks this appearance comes and passes away like a dream, intimately and exclusively our own but without reality. [Emphasis mine.]

For Arendt, then, appearance, “constitutes reality.” On the most fundamental level, we know that what we see exists because we know that others see it as well. But beyond that, like Nietzsche, she is also saying that reality is perspectival: things can and do appear differently depending upon the vantage point from which they are observed. This is especially the case when we are talking about the action and speech that “create a space between the participants which can find its proper location almost any time and anywhere.” The rapidly shifting demographics of our nation, for example — and the increasing visibility of men and women of a multiplicity of skin tones and ethnicities — may appear to one American as a threat, while to another it is a form of hope and even deliverance. For Arendt, it is, writ large, this battle-royale of perspectives that daily makes our reality.
What we enjoy, then, is a fragile creation. When deprived of a healthy variety of perspectives — as in a dictatorship or, perhaps, in a depleted and amused-to-death mass culture — our reality is diminished. Man, as the animal who appears, prefers to be seen in the best possible light, whether or not this is based on a distortion. I suspect that entire societies do, too.
Though his subjects are necessarily rendered silent, the Queens-based photographer Kris Grave’s images speak volumes about the American polis and the constant negotiation between how it would like to appear and what it really is. Who and what he chooses to render apparent — an older man surrounded by his thousands of books whose skin does not fit with our preconceptions of erudition, or dark-skinned swimmers bobbing along the turquoise waters of the Caribbean — creates an unmistakable space of Americanness, and often black Americanness: “Wherever you go, you will be a polis.”
There is an interrogative aspect as well as a quiet dignity that suffuses Graves’s portraiture and landscape photography — the physical testament of his perspective that helps constitute our reality. In 2016, he flew across the United States documenting the locations where unarmed black men and boys — from Eric Garner in Staten Island, to Tamir Rice in Cleveland and Michael Brown in Ferguson — were killed by police, as though they had no claim to the polis, or even to the physical space they’d been inhabiting. These were mostly inner city scenes — ironically, precisely the kind of spaces we’ve been conditioned to think of as where black people belong — which he captured at times when they were eerily devoid of all human presence. These are images that can move me to tears.

But I’ve come to think a lot about another set of Graves’s work, which plumbs the idea of what he calls “American privilege” and explores its many permutations and revocations. In one formally arresting image we see four well-dressed, apparently white Americans — a family? — from behind as they walk along a street and even on top of a concrete wall, as if they own the public space in its entirety. That photograph is set, alarmingly, beside a similarly bright and sunny blood-soaked street in Ferguson, Missouri, where the corpse of a black teenager, who owned for all intents and purposes nothing at all, was left for hours to bake.

Graves has always defied limitation, traveling freely and widely, and in the course of his travels he’s photographed black people in spaces, often scenes of great natural beauty and wide-open expanse, in which we do not typically imagine they belong — if we stop to imagine them at all. What he understands, and what I like to think of as the Arendtian strain in his visual work, is that race is all appearance — it’s reality is necessarily a matter of continual reassertion and collective (mis-)perception. As such, it works in tricky and surprising ways. Skin tone doesn’t just pretend to serve as shorthand for what is inside a person’s head or heart, it also seeks to tell us where in the polis — in the communal rendering — that person should be.
Thomas Chatterton Williams is the author of Self-Portrait in Black and White: Unlearning Race and a Contributing Writer at the New York Times Magazine.