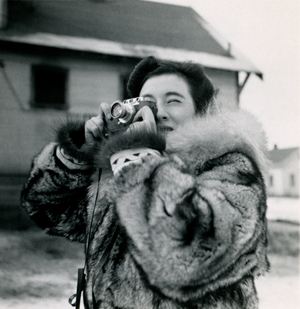 I’m Going to Send You

Emily Langer tells the story of Ruth Gruber, “an American journalist who stumbled into one of the great rescue stories of the Holocaust when the U.S. government appointed her to escort nearly 1,000 Jews across U-boat infested waters to the shores of the United States, [who] died Nov. 17 at her home in Manhattan. She was 105.” The story is well worth your time.

“Standing alone on the blacked-out deck,” she wrote in her memoir “Inside of Time,” “I was trembling with the discovery that from this moment on my life would be forever bound with rescue and survival.”

It was in 1944, a year before the war’s end, that President Franklin D. Roosevelt decided to grant temporary asylum to a group of the 36,000 refugees housed in Allied camps in Italy. They would depart from the port of Naples, traverse the ocean in the ship the Henry Gibbins and live until the end of the war at an Army camp in Oswego, N.Y.

At the time, 32-year-old Dr. Gruber was working as a special assistant to Interior Secretary Harold Ickes in a brief interlude to her journalistic career. In “Inside of Time,” she recalled the fateful conversation with her boss:

“Mr. Secretary, these refugees are going to be terrified — traumatized. Someone needs to fly over and hold their hand,”