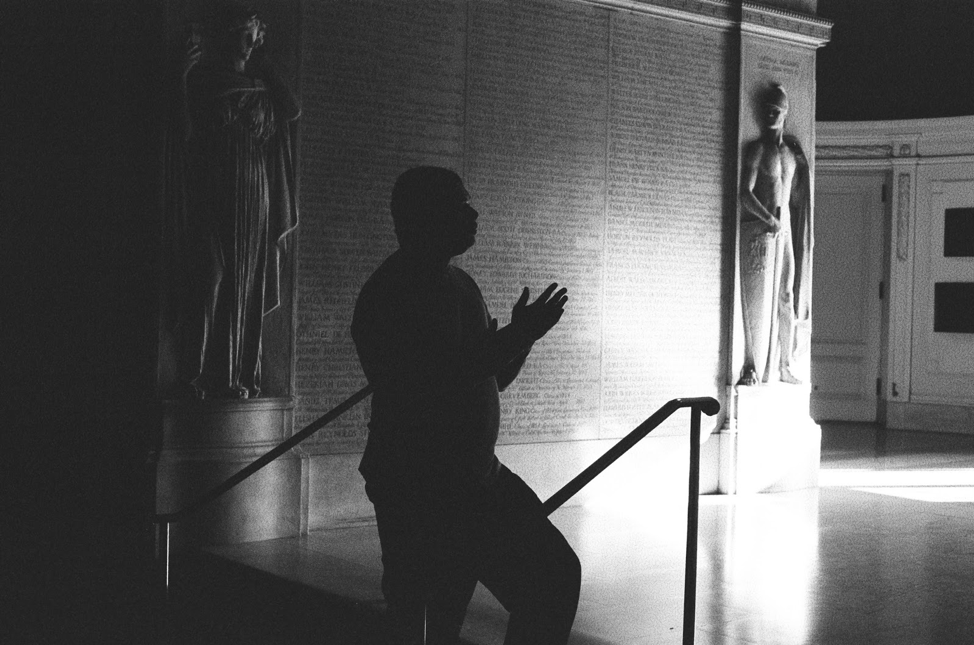 “In such times, if things turn out well, a special kind of humanity develops...This kind of humanity actually becomes inevitable when the times become so extremely dark for certain groups of people that it is no longer up to them, their insight or choice, to withdraw from the world.”

Li-Young Lee describes poetry as an utterance on the ‘dying breath’ and considers the distinct physiologies of exhalation and inhalation. For Lee, the exhaling or dying breath is foundational to the poet’s work and therefore, in Baldwin’s expansive sense of poetry, the work of all artists. I see a connection between Lee’s proposal of the dying breath as the foundation for all poetic utterances and Hannah Arendt’s sense of plurality as a thing that exists between individuals and communities, the substance of which implies interconnectedness and invites the recognition of proximities. Consider the passage of Arendt invoked by Roger Berkowitz in his article Green Shoots, from Vol. 5 of this same journal: “If someone wants to see and experience the world as it “really” is, he can do so only by understanding it as something that is shared by many people, lies between them…” Arendt’s appeal to the reality of interrelatedness is echoed in Martin L. King’s Letter from Birmingham Jail. “We are caught in an inescapable network of mutuality, tied in a single garment of destiny. Whatever affects one directly, affects all indirectly.” Plurality, it would seem for both Arendt and King, is not something merely to be held conceptually but a reality to which we become more and more perceptive through the work of compassion and community. For Li-Young Lee, words can re-establish this kind of proximity. But the arts in general have this ability; and artists, I dare say, bear a resulting responsibility to create spaces in which these proximities, the locations of our shared reality, can be mutually perceived and more thoroughly understood.

This is, I think, what people mean when they say that art promotes empathy or aids in public discourses. I would say that art is, in fact, discourse, and that it can be the kind of discourse that itself provides glimpses into the often “undiscoverable” realm of truth. This is likely because all art begins with the most pressing truth, that of death and its utterance and reckoning, which over time produces a chorus of sedimentary voices, sonically linked, and physically real: a kind of fortress of actual relation, of demonstrated, organic, proximities.

When it comes to racism, those who experience it most consciously also possess a keen understanding of those who intentionally or heedlessly oppress them. As W.E.B Du Bois famously articulated in The Souls of Black Folk, there are various levels of consciousness at work in African American experience, which extend themselves outwards necessarily to allow a plausible navigation of the world and of racist systems, structures, dynamics, and behaviors. These factors, visible and invisible, require some kind of response, even if it is apathy, denial, or resignation.  But this double-consciousness is not native to those who—due to privilege—may not be pressed upon to consider deeply the harm or implications of racism within their social situation and daily life.

There is a kinship between Du Bois’ double-consciousness and Arendt’s notion—illuminated so poignantly by Amy Schiller at last year’s HAC conference on Citizenship and Civil Disobedience—of the conscious pariah, in that the social position of the conscious pariah is what allows the perspective  required to engage in opposition of a harmful social system. Proximity to the ‘real’ world, towards which Arendt directs our aspirations, becomes a source of authentic vocation, and also of conscious community. Of course, it is a dangerous and delimiting assumption to assert that individuals and communities whose social position ‘affords’ them a distinctly clear perspective on the harms inherent within their social system—while others experience the blindness of privilege—as indicating a responsibility to activism for those who are most vulnerable to the harms delivered by such systems as racism. Reality, rather than responsibility, is the vital inhalation of Arendt’s pluralism, which is yet a source that must be sustained by a chorus of voices, both in resonance and discord. To make music of dissonance, it is important to note, requires artistry, and mastery.

Much of what we, as artists, aspire to make finds itself in a tension between deconstructed fragments, which in their disparateness become or make possible a new coherence; or else we are moved towards lyricism. And there can be a great alluring comfort in lyricism, because it carries its own weight: the gravity of style and pristine form. The American lyric is perhaps distinct in that it is equally comprised of both constructive and inquisitive, or tentative, components. That is, aspects of American identity and its related and various expressions, are merely and utterly questions, often arising as the most honest and starkly vacant endeavors of each generation’s contemplations; such that it’s claims and subsequent pronunciations of selfhood are as much confessions of misapprehension as they are plaintive, even desperate, cries for liberation and belonging.

In a racist society, racism is not perceived to harm everyone equally. The reason that racism persists is not because the work is yet lacking to address it ideologically. We might have done enough after Sojourner Truth, Ida B. Wells, Fredrick Douglas, W.E.B. Du Bois, and countless others from previous centuries—to say nothing of Lourde, Morrison, Baldwin, King, Cone, Rankine, West, and Kendi. The reason racism continues and seems continually to require elementary and remedial addresses to expose it as an actual source of harm, is because it is not experienced by many people as a harm, nor is it perceived and understood to be harmful, by many people. I think of the AIDS crisis of the 1980’s and 90’s. If the characters in the musical Rent had access to PrEP, the climax of the play would have been quite a different moment indeed. The drama of Rent was based on a real proximity to harm, one which ought to have been perceived to be near to every audience member, and not only those identified with the LGBTQ community of the time. The ability to imagine distance from a subject which is a harm to others is the ultimate privilege, and it is what erodes public discourse.

We might see this problem as a lack of empathy, but I appreciate Arendt’s imaginative and aspirational sense of plurality, that seems to suggest an inevitable proximity, the interstitials of which are opportunities for profound and constructive discourse. The artist’s work is always situated inside of this location of proximity, or perhaps is governed by it. In this sense, the artist can often be identified in terms of the pariah. Poetics itself is the navigation of a thread, which according to Li-Young Lee, begins with the witness to death, and is immediately succeeded by a recognition of the death of my neighbor’s body, the expiration of their breath. This recognition, the seed of consciousness, is an intake that defines our own and every utterance by the dying breath. Such that all discourses are a joining of that chorus, and must correspond to or otherwise construct the understanding that my neighbor’s breath and my own are unified in their lament at the loss of it.