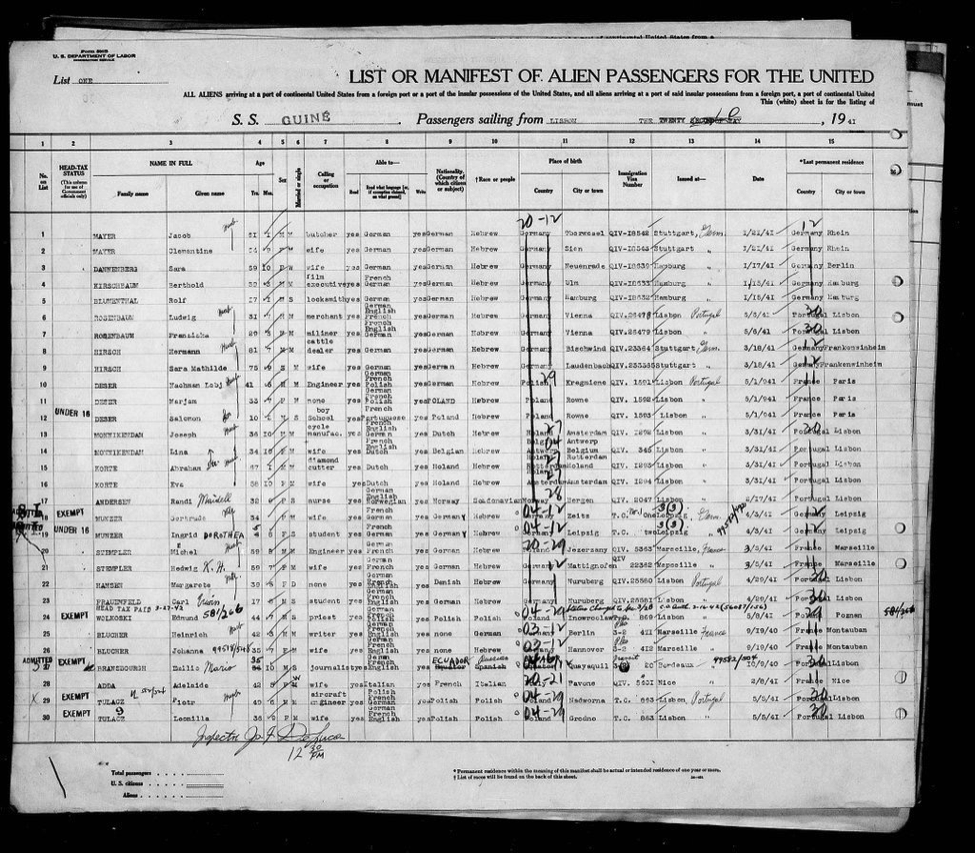 Turning Ourselves Into Outlaws Manifest from the SS Guiné, which sailed from Lisbon to NY on May 10, 1941 and arrived in New York on May 22, 1941. Johanna Bluecher (Hannah Arendt) is listed as "wife" after Heinrich Bluecher who is listed as "writer."[/caption]   Hannah Arendt arrived in France as a refugee in 1933. After escaping from Gurs internment camp she once again narrowly escaped arrest in Marseille and made her way—with the help of Varian Fry and my Bard colleague Justus Rosenberg—to Lisbon with her Husband Heinrich Blücher. Her friend, Walter Benjamin, was not so fortunate. Stopped at a border crossing in the mountains between France and Spain, Benjamin committed suicide. Berthold Brecht wrote this poem "On the Suicide of the Refugee W.B."

I'm told you raised your hand against yourself Anticipating the butcher. After eight years in exile, observing the rise of the enemy Then at last, brought up against an impassable frontier You passed, they say, a passable one. Empires collapse. Gang leaders Are strutting about like statesmen. The peoples Can no longer be seen under all those armaments. So the future lies in darkness and the forces of right Are weak. All this was plain to you When you destroyed a torturable body. (quoted in Ermut Wizisla, Walter Benjamin and Berthold Brecht)

Arendt and Blücher left Lisbon aboard the SS Guiné on May 10, 1941. They carried Benjamin's manuscript "Theses on the Philosophy of History," which Benjamin had given Arendt in case something happened to him. Arendt and Blücher reportedly read Benjamin's "Theses" to other passengers on the Guiné as they crossed the Atlantic. [caption id="attachment_18661" align="alignleft" width="300"] The SS Guiné, the ship that carried Arendt and other refugees to New York.[/caption]

Arendt and Blücher arrived in New York in May, 1941. They were stateless refugees. Not all refugees, of course, were so lucky. The infamous ship the St. Louis limped around the Atlantic in 1939 with over 900 German Jews on board. The United States and Cuba both refused refuge to the refugees. Eventually the ship returned to Germany and most of the passengers on board were eventually killed during the Holocaust.

In 1943, Arendt wrote an essay “We Refugees” that was published in Menorah, a small Jewish Journal. The essay begins, “In the first place, we don’t like to be called “refugees.”” She is painfully aware that the word “refugee” is a deadening word. The word, refugee, flattens a person and a people marked by loss and vulnerability. Having lost their home, their language, their friends, and their families, refugees live in camps, in public; they experience the rupture of their private lives and their public visibility as only a mass. The refugee is transformed from a person with a history and world into a pitiable figure. We can have compassion for an individual, look into their eyes, touch their shoulder, and feel the humanness in their pain. But faced with masses of refugees hands open, seeking refuge, compassion is too often replaced by pity (if not by fear).

Against this flattened view, Arendt seeks to remind us what refugees actually are: (Source: Flickr/Kyle Ludwig Poggeman)[/caption] Scott Adams gets it, that Trump thrives on outrage overload, all of which deflates his opposition and give the appearance that he is doing exactly what he promised: Outraging the elites and fighting for the little guy.

"At the moment there are so many outrages, executive orders, protests, and controversies that none of them can get enough oxygen in our brains. I can’t obsess about problem X because the rest of the alphabet is coming at me at the same time. When you encounter a situation that is working great except for one identifiable problem, you can focus on the problem and try to fix it. But if you have a dozen complaints at the same time, none of them looks special. The whole situation just looks confusing, and you don’t know where to start. So you wait and see what happens. Humans need contrast in order to make solid decisions that turn into action. Trump removed all of your contrast by providing multiple outrages of similar energy. You’re probably seeing the best persuasion you will ever see from a new president. Instead of dribbling out one headline at a time, so the vultures and critics can focus their fire, Trump has flooded the playing field. You don’t know where to aim your outrage. He’s creating so many opportunities for disagreement that it’s mentally exhausting. Literally. He’s wearing down the critics, replacing their specific complaints with entire encyclopedias of complaints. And when Trump has created a hundred reasons to complain, do you know what impression will be left with the public? He sure got a lot done. Even if you don’t like it." Rick Perlstein tells Peter's story, the story of a Trump voter from a small town in Oklahoma.

"Peter was one of the brightest students in the class, and certainly the sweetest. He liked to wear overalls to school—and on the last day, in a gentle tweak of the instructor, a red "Make America Great Again" baseball cap. A devout evangelical, he'd preferred former Arkansas Gov. Mike Huckabee at the start of the primary season, but was now behind Donald Trump. One day the students spent three hours drafting essays about the themes we'd talked about in class. I invited them to continue writing that night so the next morning we could discuss one of their pieces in detail. I picked Peter's because it was extraordinary. In only eight hours he'd churned out eight pages, eloquent and sharp. When I asked him if I could discuss his essay in this article, he replied, "That sounds fine with me. If any of my work can be used to help the country with its political turmoil, I say go for it!" Then he sent me a new version with typos corrected and a postelection postscript: "My wishful hope is that my compatriots will have their tempers settled by Trump's election, and that maybe both sides can learn from the Obama and Trump administrations in order to understand how both sides feel. Then maybe we can start electing more moderate people, like John Kasich and Jim Webb, who can find reasonable commonality on both sides and make government work." Did I mention he was sweet? When he read the piece aloud in class that afternoon in October, the class was riveted. Several of the black women said it was the first time they'd heard a Trump supporter clearly set forth what he believed and why. (Though, defying stereotypes, one of these women—an aspiring cop—was also planning to vote for Trump.)"

In the end, however, Perlstein concludes that Peter is racist. Peter had written: "One need only look to the Civil War and the lasting legacies of Reconstruction through to today's current racism and race issues to see what happens when the federal government forces its morals on dissenting parts of the country." Perlstein reports that when he read this line, he "shuddered." He wrote Peter and said: ""A lot of liberals, even those most disposed to having an open mind to understanding the grievances of people like you and yours, will have a hard time with [your words]." Peter's answer was striking. He first objected (politely!) to what he saw as the damning implication behind my observation. Slavery and Reconstruction? "I was using it as an example of government intrusion and how violent and negative the results can be when the government tries to tell people how to think. I take it you saw it in terms of race in politics. The way we look at the same thing shows how big the difference is between our two groups." From this interaction, Perlstein has this conclusion: "Liberals must listen to and understand Trump supporters. But what you end up understanding from even the sweetest among them still might chill you to the bone." That an effort by one of the self-described elite to understand a sweet and smart Trump voter leads to a confirmation of his justified contempt, shows just how far apart the country remains. —Roger BerkowitzForm more information visit: http://www.motherjones.com/politics/2017/01/donald-trump-2016-election-oklahoma-working-class