Kazin, Arendt, and the Divinity of Justice

"I think that of all the people I have ever known, you have been the staunchest in thought, the freest from conventional faithlessness." Alfred Kazin wrote these words to Hannah Arendt in 1961.

A few months ago I was enjoying a lunch with my new friend Matthias Bormuth, author of a wonderful book on Karl Jaspers, and he was telling me how important Alfred Kazin is, how compelling and all-encompassing his thought remains today. I, admittedly, had not read much of his work. Then this week I find Edward Mendelson's thoughtful and energetic review of Alfred Kazin’s Journals (ed. by, Richard M. Cook ?and published by Yale University Press). I may be slow, but I am definitely interested to read more of Kazin now.

Mendelson shows how Kazin was "driven by his own religious sense of what an eternal truth might really be—something demanding, uneasy, uncompromising." Kazin was, as was Arendt, someone propelled forward by the necessity of unrealizable ideals.

What God and religion meant for Kazin are simply wonder. Neither the religious god of commandments, nor the philosopher's god of truth---God for Kazin stood for the belief that the world was meaningful and valuable. At one point in his journals, he writes:

I do not believe in the new God of Communism or the old God of the synagogue—I believe in God. I cannot live without the belief that there is a purposeful connection that I may yet understand which I can serve. I cannot be faithless to my own conviction of value.

It is not surprising, then, that Kazin was, in his own words, charmed by Arendt, and "by no means unerotically." According to Mendelson, "The writer who most inspires [Kazin] to reverence is Hannah Arendt."

What most charms Kazin in Arendt is her unfailing sense of justice, her strength to pursue that which is beyond most people's purview.

When I read her, [Kazin writes in his journals,] I remember, for a brief instance, a world, another world, to which we owe all our concepts of human grandeur…. Without God, we do not know who we are. This is what she recalls to me, and for this I am grateful. 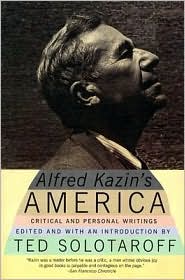 In an essay on Arendt written after her death, Kazin elaborated:

What made her exceptional indeed... was what I will always think of as her intellectual love of God, her belief in gratitude for our gift of being. A less fancy way of saying this: many modern Jews are religiously frustrated; she was not willing to be. While she discounted Judaism, and was often impatient with Jews, she did so out of spiritual need.

Kazin's point, I believe, is that Arendt believed in freedom and justice with the passion and conviction that religious Jews believe in God. Just as belief in God separates Jews from the everyday world, Arendt's belief in justice made her a conscious pariah, one who stood apart from the conventions of the world that dull the intensity and mystery of human being.

In 1963, after reading Eichmann in Jerusalem —a book that echoed [Kazin's] dismay over Jewish passivity—he sets her down as “one of the just…. She holds out, alone, for basic values.” Her sense of justice “is the lightning in her to which I always respond.”

Kazin, however, was by no means a fawning admirer of Arendt. He was and could be critical, even of her book Eichmann in Jerusalem. He shared Gershom Scholem's view that Arendt's tone was unnecessarily "heartless," and he worried deeply that the "banality of evil" was being and would continue to be misused and abused by journalists around the world. And of course he has been correct in that latter assessment.

What continued to draw Kazin to Arendt, however, was simply the power of her thought. He was taken with the way she would always say, in conversation and in her books, "We must think what we are doing." To Kazin,

'Thinking' as a positive ideal, as a way of closing in on any subject without surrendering to its worldly repute, became [Arendt's] way of independence as well as a constant goad to her untiring intelligence. Her intellectual self-confidence went hand in hand with a candid "loneliness in this world" to which she always managed to give a philosophical and even theological aura.