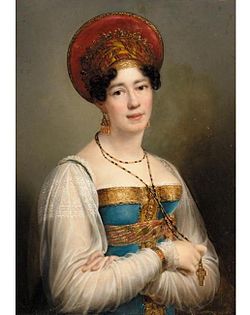 Madame Swetchine on the Garlands of Our Thoughts

"To have ideas is to gather flowers. To think is to weave them into garlands."

Writer, b. at Moscow, 22 Nov., 1782; d. in Paris, 10 Sept., 1857. She was a member of a noble family, and became associated with French literature through her correspondence and other writings. Impressed by her precocious intelligence, her father gave her a very careful education in everything except religion, which he ignored. At fourteen she was appointed maid of honor to the empress Catherine the Great. At seventeen she was married to General Swetchine who was forty-two. By birth she belonged to the Greek, or Orthodox Church, but from the time that her trials, her reading, and her own reflections had made her a Christian, she felt the necessity of following to the end of the path which was leading her to the truth, and she became a Catholic.... At the time of her conversion she was thirty-three years old. She had already left the court, her husband having been disgraced, with his father, as the result of a plot of which he was the victim. Thenceforth she had to leave even her country, since as an avowed Catholic she could not remain at St. Petersburg. With her husband she went to reside at Paris at the beginning of the Restoration. She had been preceded by a letter from Joseph de Maistre, who wrote to Bonald: "In a short time you will see at Paris a Russian lady whom I especially commend to you. Never will you see such moral strength, wit, and learning joined to such goodness." In her salon in the Rue Saint Dominique, open from three to six, and from nine to midnight, she saw all the most distinguished men of the period: Chateaubriand, Bonals, Cuvier, Cousin, Donoso Cortoes, and among her intimates were Augustin Cochin, Tocqueville, Falloux, who wrote her biography, Lacordaire, and Montalembert, who were like her spiritual sons. Her influence was incontestable. She died as a devout Christian in 1857 at the age of seventy-five.