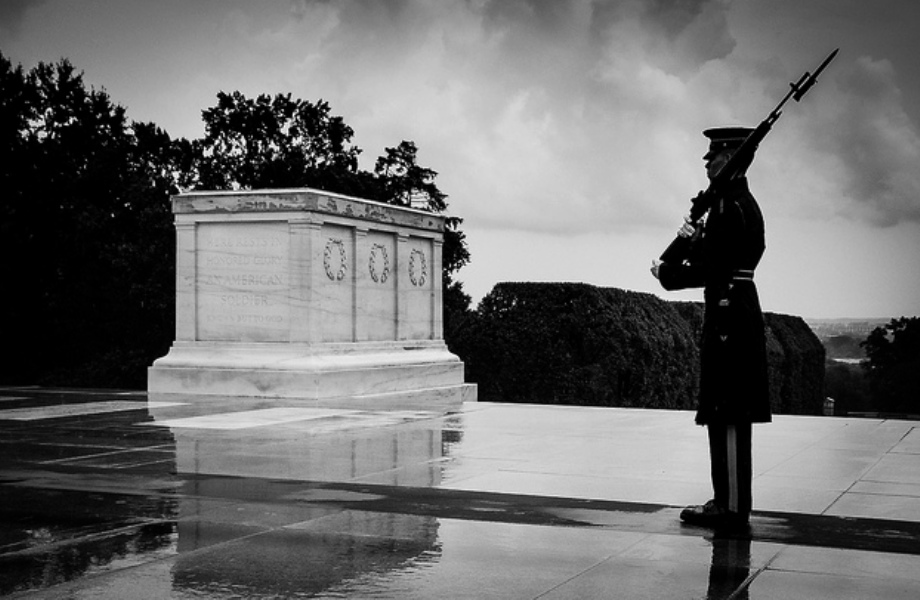 "The monuments to the 'Unknown Soldier' after World War I bear testimony to the then still existing need for glorification, for finding a 'who,' an identifiable somebody whom four years of mass slaughter should have revealed. The frustration of this wish and the unwillingness to resign oneself to the brutal fact that the agent of the war was actually nobody inspired the erection of the monuments to the 'unknown,' to all those whom the war had failed to make known and had robbed thereby, not of their achievement, but of their human dignity."

Hannah Arendt places works of art the in center of the common world. While scholars have drawn attention to her references to such literary authors as Rilke and Kafka in recent years, little notice has been made of her discussion of other types of artwork. Among these, her references to monuments illuminate a connection between the aesthetics and action in the political realm. In The Human Condition, Arendt refers to monuments a handful of times. Most of these references are general and speak to the place of the monuments in the work that commemorates action and creates a common world. However, she also at one point discusses an actual monument, or at least type of monument, that complicates the process of creating historical memory through a common world of things.

The first time Arendt speaks of monuments, she uses them to distinguish the permanence of work from the transience of labor. Work comes from a wish to free oneself from the circular tasks associated with the labor needed to maintain the household and the body. Further, it leaves something behind, a "trace" that recalls the past. Freud and later Derrida both work with the "trace" as a partial marker of an event, an indication of a loss of presence. As these thinkers emphasize, the trace is never fully there. Yet recalling that in its etymology "monument" comes from the Latin mon?re for "remind," we can see that the monument still has an aspect of presentation. Its trace points to "a great work worthy of remembrance" (Human Condition 81). The monument works as an instrument of cultural transmission, reminding us of what we hold of common importance in history.

The next reference relates work to action. In a fascinating phrase, Arendt says that action is "as futile as life itself." This phrase links action to labor, realms which Arendt scholars too frequently place at a distance. To enter the stability of the world, Arendt writes that action needs to be "reified as it were into things" including monuments (HC 95). Arendt uses "reified" to indicate the shift from the political to the aesthetic sphere. She says that the process works through a loss in a transformation from the "living spirit" of action to the "dead letter" of the object. So in relation to the first reference to the monument, we learn that it should in some sense contain a trace of the spirit that has been lost in its creation. In the examples above, Arendt uses "monument" in the general sense. She may be talking about specific public markers or other, more general kinds of artistic objects that serve metaphorically as important reminders of the past. When she actually speaks of a monument in the concrete sense, she complicates the process of representation that she developed through reification. This reference occurs in Chapter 24 of The Human Condition, perhaps the richest and most complex chapter in the book for its evocative language related to natality and action. At the end of this chapter, she explains that the monument to the unknown soldier records not a heroic victory but an incompleteness.

As historical background, we should note that after World War I, starting in France and England, countries built monuments to the unknown soldier according to a precise model of representation. They took the remains of a single soldier that could not be identified and buried it beneath a large memorial that was intended to represent all of the unknown dead of the war. In aesthetic terms, the monuments were meant to create a relation of synecdoche in which a part (one unknown soldier) stands in for the whole (all unknown soldiers.) The government's use of public art would thereby make up for the ignominious deaths it demanded.

This strategy of representation offers a kind of illustration of Arendt's use of "reification" in her general description of the monument, though through a kind of inversion. The monument to the unknown soldier tries to show the heroic deed of the "who" involved in war, but it instead reveals the aesthetic logic in the construction of the monument. Arendt shifts from the obscurity of the victims of the war--the objects, so to speak--to its agents. We are left with a strange description of the war: that "nobody" did it to no one. The choice of the word "nobody" is telling here, since the monument tries to reify, to create a thing, but not out of nowhere. It has to have some material to start with that serves as a referent. These soldiers lost their basic human dignity as private individuals but did not reach the glory of a heroic death.

In other words, the tomb does not lead to identity but tells the story of a loss of identity. "Frustration […] inspired" these monuments. From the word "inspire," we see a wish to endow them with spirit as a result of the loss of the "living spirit" in the general description of the monument above. Arendt leaves open the question if the monuments succeeded or not in satisfying this frustration. The tone of her analysis though suggests that the process is not wholly admirable. From her description, we are left not with a heroic satisfaction but a greater social frustration over the cause of the war. ("Why War?" as Freud asked.) The work of art that was to help us remember the agent actually leads us to ask why there was war in the first place.

At the end of this quote, Arendt inserts a footnote to the Faulkner novel A Fable, which she praises for being a story of the unknown soldier. The novel tells of a French corporal who tells his men to disobey orders to attack, which leads to a kind of strike against war itself by the soldiers in trench warfare. Through ironic coincidence, the body of this corporal end up being used in the body of the tomb of the unknown soldier in Paris. The soldier who fought against war ends up being used, anonymously, for it.

The history of monuments for the unknown soldier in the United States puts another twist on the relation of the body to the monument. Following the European countries, the United States erected a monument for the unknown soldier lost in World War I. It later added similar tombs for World War II, Korea, and Vietnam. In a theoretically intriguing twist, the body originally interred in the Vietnam memorial was later identified with DNA testing. At this point, it was decided that the crypt should remain vacant. With the body in it, one might say that the monument incorporates and keeps the trace of the move Arendt highlights from living spirit to dead material. According to a more common theory of aesthetics associated with Hegel, it would be acceptable to do away with the body to the advantage of the symbol. But what are we to make of the hollow grave existing below the monument? Perhaps it testifies to the hollowing out of the representational strategy, such that the political need for glorification remains after its aesthetic correlative has been exhausted.