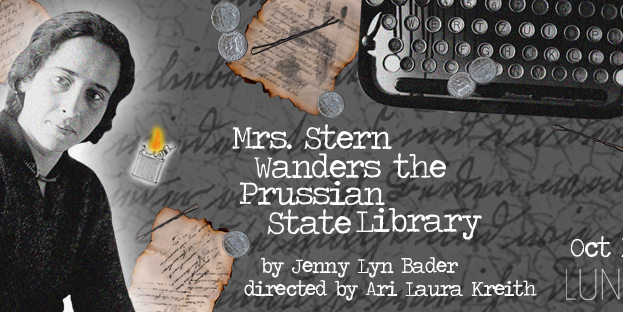 In the Spring of 1933, just months after Hitler became the Chancellor of Germany and the Reichstag (Parliament) was destroyed by fire, a slight, young, studious Jewish woman Johanna Stern is denounced, arrested and placed in a dank basement prison cell where she is interrogated by newly minted SS officer Karl Frick. The charge: treason. The evidence: She was seen copying documents at the state library. Is Mrs. Stern an innocent who merely pressed the copy button on the mimeograph machine at the wrong moment? Is she an enemy of the state or a hapless intellectual searching for a strudel recipe in the newspapers?

Both young people face off in Jenny Lyn Bader’s Mrs. Stern Wanders the Prussian State Library, now receiving its world premiere at Luna Stage in West Orange. The pair plays a subtle game of cat-and-mouse, with the arrogant, enthusiastic Karl attempting to trip up a wily Mrs. Stern. Faced with a list of what could be damning social relationships, she attempts to shrug them off as mere acquaintances, but is she really as innocent as she appears to be?

For a tense 90 minutes, Luna Artistic Director Ari Laura Kreith ratchets up the suspense, eliciting sympathetic performances from Giuliana Carr (Hannah) and Brett Temple (Karl) as the plot marches inexorably toward a surprising denouement. Stephanie Osin Cohen’s stark set feels claustrophobic, as conveyed by Hannah’s increasingly anxious pacing around the small playing space. Jennifer Fok’s dark lighting and Caroline Eng’s ominous sound, with its clanking metal cell doors, dripping water, cries of prisoners and muted roar, convey the Hellish feel of the place. The result: an intimate, riveting revelation of insight and courage expressed in unexpected ways. In short, the ability of the human spirit to transcend a terrible situation to find salvation—literal and figurative.

The Mrs. Stern in the play is actually a young Hannah Arendt, who at the time went by her married name, Johanna Stern. Arendt speaks about her arrest in her famous interview with Günter Gaus. She tells Gaus that after the burning of the Reichstag she could no longer avoid politics. She thought about emigrating but decided to help the Zionists get the word out to the International community about what was really happening in Germany. She was arrested, and Bader’s play uses Arendt’s description of the encounter to explore the dangers of arbitrary rule and the essence of totalitarian government. Bader is married to Roger Berkowitz, Founder and Academic Director of the Hannah Arendt Center. Berkowitz will be speaking about the play and its connection with Arendt’s work in  a post-show discussion on Friday, October 25th.