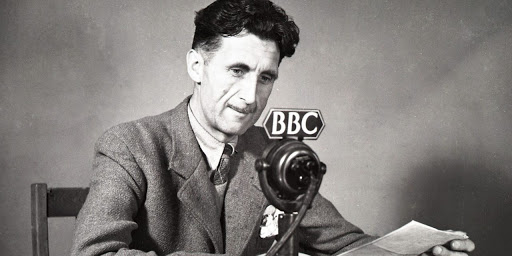 On Not Being Silent

George Orwell was one of the greatest anti-fascists of the 20th century. Not only did he satirize and expose fascism and totalitarianism in his novels 1984 and Animal Farm, but also he enlisted and fought fascists in Spain with the Spanish Republicans. Orwell risked his life to oppose and counter fascism wherever he found it. And yet, in 1941, Orwell wrote one of his classic essays defending the English writer P.G. Wodehouse against charges of fascism.

Wodehouse was an English comedic writer when he was captured by the Germans while living in Belgium in 1941. After a year in prison, Wodehouse was released and he began doing some broadcasts for a German radio station and wrote an essay in an English newspaper about his experiences. Orwell offers three quotations that he says are a fair sampling of what Wodehouse said and wrote:

“I never was interested in politics. I'm quite unable to work up any kind of belligerent feeling. Just as I'm about to feel belligerent about some country I meet a decent sort of chap. We go out together and lose any fighting thoughts or feelings.”

“A short time ago they had a look at me on parade and got the right idea; at least they sent us to the local lunatic asylum. And I have been there forty-two weeks. There is a good deal to be said for internment. It keeps you out of the saloon and helps you to keep up with your reading. The chief trouble is that it means you are away from home for a long time. When I join my wife I had better take along a letter of introduction to be on the safe side.”

“In the days before the war I had always been modestly proud of being an Englishman, but now that I have been some months resident in this bin or repository of Englishmen I am not so sure. ...The only concession I want from Germany is that she gives me a loaf of bread, tells the gentlemen with muskets at the main gate to look the other way, and leaves the rest to me. In return I am prepared to hand over India, an autographed set of my books, and to reveal the secret process of cooking sliced potatoes on a radiator. This offer holds good till Wednesday week.”

The response in the British public was swift. Wodehouse was denounced as a fascist. Public libraries culled Wodehouse’s books and his lyrics were banned from the BBC. But for Orwell the anti fascist, Wodehouse’s comments hardly revealed him to be a fascist. The writings were, he argued, evidence of stupidity not fascism.

There is an old saying that if you throw enough mud some of it will stick, and the mud has stuck to Wodehouse in a rather peculiar way. An impression has been left behind that Wodehouse's talks (not that anyone remembers what he said in them) showed him up not merely as a traitor but as an ideological sympathiser with Fascism. Even at the time several letters to the press claimed that “Fascist tendencies” could be detected in his books, and the charge has been repeated since. I shall try to analyse the mental atmosphere of those books in a moment, but it is important to realise that the events of 1941 do not convict Wodehouse of anything worse than stupidity. The really interesting question is how and why he could be so stupid. When Flannery met Wodehouse (released, but still under guard) at the Adlon Hotel in June 1941, he saw at once that he was dealing with a political innocent, and when preparing him for their broadcast interview he had to warn him against making some exceedingly unfortunate remarks, one of which was by implication slightly anti-Russian. As it was, the phrase “whether England wins or not” did get through. Soon after the interview Wodehouse told him that he was also going to broadcast on the Nazi radio, apparently not realising that this action had any special significance.…

In the desperate circumstances of the time, it was excusable to be angry at what Wodehouse did, but to go on denouncing him three or four years later — and more, to let an impression remain that he acted with conscious treachery — is not excusable. Few things in this war have been more morally disgusting than the present hunt after traitors and Quislings. At best it is largely the punishment of the guilty by the guilty. In France, all kinds of petty rats — police officials, penny-a-lining journalists, women who have slept with German soldiers — are hunted down while almost without exception the big rats escape. In England the fiercest tirades against Quislings are uttered by Conservatives who were practising appeasement in 1938 and Communists who were advocating it in 1940.

Yascha Mounk rightly reminds us of Orwell’s essay in a recent essay of his own. Mounk, as have I and many others, have had to ask ourselves often in the last few months, are we going to defend someone who, because of some stupidity or--in some cases--for really no reason at all, is being hounded by a mob on Twitter or by those seeking to enforce a purity of opinion on campuses or in the press. There is, at our present moment, an uncompromising intolerance for opinions or mistakes that is reminiscent of the “morally disgusting… hunt after traitors and Quislings” described by Orwell. And anyone who stands up to defend someone attacked for some supposed breach of acceptable opinion becomes, themselves, a target by association.

The power politics at play in such attacks are clear: they are designed to make the costs extreme for having or defending those who have independent opinions. In such a situation, it is easy to tell oneself that while an attack on so-and-so was wrong, defending them when I barely know them is not my battle. It is too easy to convince oneself that so-and-so is, in the end, also a flawed individual who doesn’t deserve my sacrifice for her struggles. And yet as Mounk writes, such excuses for the instinct to be silent are dangerous.

I know just how powerful this instinct is because I myself feel it nearly every day. When the accusation is particularly absurd, or the person who is under attack especially honorable, I speak up for them without hesitation. But when the person who is in danger of receiving an unduly harsh verdict in the court of public opinion holds some views with which I myself strongly disagree, or has made a mistake that really is deserving of some minor form of social censure, I hear a little voice inside me ask: “Is this really the hill you want to die on? Can’t you just sit this one out?”

But as Orwell’s essay reminds us, that would be a big mistake. For what is at stake when somebody is falsely accused is not only the fate of that particular individual; it is the maintenance of a principle without which an honest intellectual life would quickly become impossible.

Mounk’s essay appears in a new forum Persuasion. During the Hannah Arendt Center’s annual membership drive, you can join the Arendt Center and get a subscription to Persuasion in a joint promotion. Learn more about joining both these communities here.