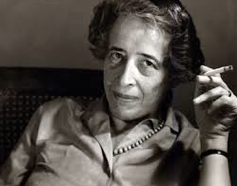 On the Banality of Not Bearing Witness

The fact is that Eichmann did not see much…. He saw just enough to be fully informed of how the destruction machinery worked….

—Eichmann in Jerusalem: a Report on the Banality of Evil

In order to respond reasonably one must first of all be “moved,” and the opposite of emotional is not “rational,” whatever that may mean, but either the inability to be moved, usually a pathological phenomenon, or sentimentality, which is a perversion of feeling.

Comprehension, in short, means the unpremeditated, attentive facing up to, and resisting of, reality — whatever it may be.

—The Origins of Totalitarianism

On May 5, 2020, anonymously leaked video brought the lynching of Ahmaud Arbery in Glynn County, Georgia into the light of the public realm. It is devastating footage and I was overwhelmed when I truly comprehended what I was witnessing. As I did, I cried out of grief, shame, and anger. I looked to my husband and confessed, “I did not want to see this.” But, the fact is I did not see much, even if what I had witnessed was just enough to understand how the destructive machinery of white supremacy works in an America still emphatically riven by the “color line” that W. E. B. DeBois, writing in the context of Atlanta, Georgia in 1905, in The Souls of Black Folk, so presciently identified as the defining crisis of modernity.

Few indeed want to witness such traumatic, terrible, even terroristic videographic footage. Yet, in crucial regards, the promise of a common political world essential to a democracy depends upon precisely a willingness to suffer the sight of such violence, and to be “moved” by it. Here Hannah Arendt has perhaps unanticipated contributions to make in illuminating the political responsibility, of white citizens especially, to bear witness to terrible and traumatic footage such as the video documenting the lynching of Ahmaud Arbery, to comprehend the reality of the ordinary, mundane, even banal attrition of white supremacy in our everyday lives. While she did not do so in her lifetime, I believe it possible to extend Arendt’s thinking productively in the direction of formulating a principled appeal to being “moved” by such events by bearing witness to them as a prerequisite to being able to resist the privileges and prerogatives of political anti-Black racism in concerted action assembled around its abolition.

Arendt makes the case positively for being moved by disturbing facts in her Lessing Prize address, where she endows suffering passions, even our most intensely discomfiting passions, with a univocity of pleasure to the extent that they put us in touch with reality, allowing, not impeding, us to respond reasonably. Elsewhere, in a response to Eric Voegelin, Arendt clarifies that if we do not allow our emotions to “interfere” when confronted with a terrible and traumatic sight, or in our attempt to describe it, then we have “lifted [the] particular phenomenon out of its context in human society and have thereby robbed it of part of its nature, deprived it of one of its important inherent qualities.” To not speak with anger about the concentration camps, Arendt flatly states, is to “condone them.” Really comprehending reality, then, means openness to this affective interference in our perception of and communication with the world of disturbing facts as indispensably co-constitutive of our commonsense sensibility of the world.

Negatively, Arendt mercilessly ironizes how Eichmann “never realized what he was doing.” This lack of realization flowed not just from the sorry state of affairs that saw Eichmann unwilling to think for himself, but also, perhaps just as unsettling, that he did not even allow himself to feel for himself. Arendt is a sufficiently Nietzschean psychologist to understand that when she describes the opposite of emotional as not “rational,” but either a pathological anaesthetization or a hyper-sentimental “perversion of feeling,” she is describing two sides of the same coin, for Eichmann was able to remain unmoved by the gruesome conduct of his duties precisely by indulging in a perverse sentimental fragility that could not stand the sight of a “gaping wound.”

On the contrary, writes Rei Terada, Arendt “prizes being the sort of person who can stand seeing a wound”; “on the compensating condition that they do so under protest, the eyes stay open.” Bearing witness to traumatic and terrible facts for Arendt means being able to comprehend reality by becoming attentive to what, in fact, is occurring in our common world, often in our name, under the banner of principles not at all unfamiliar to our political and legal tradition. Comprehending reality is thus not acceptance of reality, least of all in the name of realism.

Rather, Arendt’s language for the reasonable response motived by comprehension is resistance. For her, although we are to be grateful for our given appearance on this planet, even in such “dark times,” we are not to simply take “as given” the injustices that constrain and contract, rather than proliferate and dilate, the free and equal worldly appearance of plurality. Bearing witness to such a disturbing thing as the video of Ahmaud Arbery, while it risks being a thing of fetish, also enables a reasonable response that reflects the interference of our emotions; it is far from irrational that, “when our sense of justice is offended […] we react with rage,” Arendt writes, situating this emotional propellent as an indispensable component of the deliberate speed with which we are called upon to respond to such matters. Bearing witness moves us to deliberation, but with what Dr. Martin Luther King, Jr. called the fierce “urgency of now.”

In Arendt’s time, she lamented that there had not yet been an adequate “political expression” of the “elemental shame” felt simply by virtue of “being human” in an era defined by the racism of white nationalist ideology. However, we can understand from her works that such a political expression would be one that integrates “lamentation and denunciation,” as well as the comprehension that comes from being moved, to allow political resistance to the impoverishment of given worldly plurality for the sake of its free and equal appearance. Today, that political expression may, again, be “abolition,” a term that I understand as gathering together many scholarly and activist currents in a project of radical, reparative racial justice.

Here Arendt is again a productive interlocutor in imagining abolition, for she too was motivated to comprehend political affairs explicitly by the problem of bearing witness to something “which I did not want to conserve but, on the contrary, felt engaged to destroy.” To such a political project Arendt lends meaningful principles, such as plurality, freedom, natality, and worldliness to guide our affairs and to help us think what we are doing by staying in touch with our capacity to be moved by the reality we precariously, and perhaps only as yet an aspiration, hold in common. Arendt understood that while watching disturbing videographic footage like the lynching of Ahmaud Arbery is not enough, it is crucial to being moved to comprehending the seriousness of the crisis we collectively face and confirming the reality that it will only be through concerted action that justice in America will become a reality.

Thus, while Ahmaud’s death is a clear and painful reminder of the everyday terror of the color line, it can continue to also become the occasion for meaningful cross-cutting collective action and consciousness raising. For, Arendt understood that it is together that we must unlearn the practices, habits, intuitions, and expectations of white supremacy and that entails exercising the faculties of action — forgiving and promising — to pursue abolition as a reasonable response to the outrages of white supremacist violence, to allow something new to occur. Here, the initiatives of organizations and collectives such as Black Lives Matter, the Black Youth Project 100, and Assata’s Daughters are also invitations for our participation, solidarity, and advocacy to which we have the responsibility, as citizens, to affirmatively respond in the name of plurality.
End notes
[1] DuBois, W.E.B. The Souls of Black Folk, pp. 3.
[2] Arendt, Hannah. Men in Dark Times, pp. 14.
[3] Arendt, Hannah. Essays in Understanding, “Reply to Eric Voegelin,” pp. 403.
[4] Arendt, Hannah. Eichmann in Jerusalem, pp. 287.
[5] Arendt, Hannah. Eichmann in Jerusalem, pp. 106, 86–89.
[6] Terada, Rei. “Thinking for Oneself,” pp. 850.
[7] Arendt, Hannah. “On Violence,” in Crises of the Republic, pp. 159.
[8] Arendt, Hannah. Essays in Understanding, “Organized Guilt and Universal Responsibility,” pp. 131.
[9] Arendt, Hannah. Essays in Understanding, “Reply to Eric Voegelin,” pp. 402.
Samuel R. Galloway, PhD, teaches courses in political theory and American politics. His courses explore topics of contentious political action, ideology and propaganda, media, and communications, and surveillance and representation at the intersections of race, sexuality, gender, class, and citizenship. Dr. Galloway’s research addresses questions of democracy in contemporary and canonical political thought and practice.