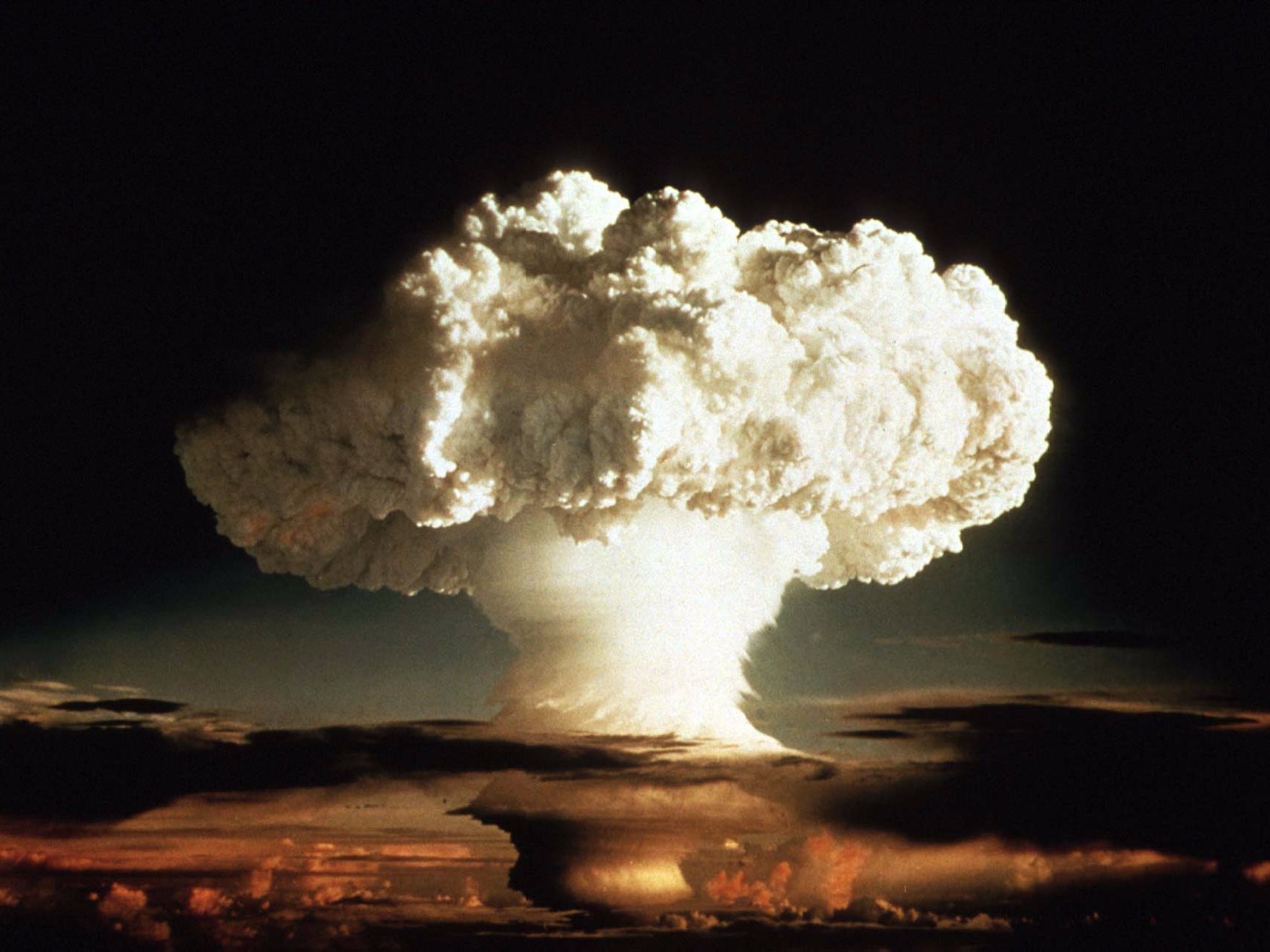 On the Possibility of an Arendtian Nuclear Theory

“The horror that swept over mankind when it learned about the first atomic bomb was a horror of an energy that came from the universe and is supernatural in the truest sense of the word. The scope of the devastation to buildings and boulevards, even the number of human lives destroyed, was relevant only because, in unleashing death and destruction on so vast a scale, this newly discovered source of energy had eerily impressive symbolic power from the very moment of its birth.”

Although Arendt wrote relatively very little on the nuclear age, we know from her earlier writings what she thought about the existence of nuclear weapons and the threat of nuclear war. From such disparate references to the nuclear age, a strikingly simple yet prescient idea emerges that arguably bears more resemblance to Eastern cosmology than any Western tradition: the human condition must be properly understood as being co-constituted and mutually implicated in the cosmos.

Indeed, Hannah Arendt (1968) emphasised the public display of violence and injustice associated with nuclear weaponry, which she saw as "the most potent symbol of the unity of mankind", in eliciting a "negative solidarity" based on the realisation of "the remote possibility that atomic weapons used by one country according to the political wisdom of a few might ultimately come to be the end of all human life on Earth". Jeffrey C. Isaac (1994, 224), in a review of Arendt’s work alongside that of Camus, regards her statements here as "the ultimate expression of modern powerlessness". Indeed, for Arendt, alongside totalitarianism, nuclear war rendered "meaningless" both traditions of justification for political violence: the Greek and Roman sacredness of life more than the self and the Judeo-Christian respect for the bare fact of life itself.

Writing in 1958, Arendt (2011) stated in no uncertain terms that the sacrifice inherent in political violence can only possibly be desirable if there is something to survive for and that the very prospect of nuclear war calls into question "the whole political and moral vocabulary in which we are accustomed to discuss these matters". This is because, for Arendt (2007b), the prospect of nuclear war forces a "more radical, more aggressive, and more desperate" question than merely "what is the meaning of politics?" But instead one that forces us to confront whether "politics still [has] any meaning at all?" The impetus for this more forceful--and arguably more fundamental--line of argument is Arendt’s awareness of:

"[…] the monstrous development of modern means of destruction over which states have a monopoly, but which never could have been developed without that monopoly and which can be employed only within the political arena. Here the issue is not just freedom but life itself, the continuing existence of humanity and perhaps of all organic life on earth." This Aug 6 1945 file photo shows the destruction from the explosion of an atomic bomb in Hiroshima Japan (AP Photo File) (Source: Hindustan Times)[/caption]

Despite the importance that Arendt placed on nuclear violence, Jonathan Schell (2010, 248–50) has lamented the fact that Arendt (2007b) never gave nuclear weapons a sustained book-length treatment, which he finds remarkable given her life-long fascination with genocide and violence to cultural "plurality".[1] For Schell, Arendt’s most strident writing on the nuclear question can be found in her posthumously published works of otherwise dormant manuscripts, The Promise of Politics (2005). Described by Schell as a "plum pudding" of incomplete thoughts and unrefined lines of argument about the meaning of politics, Arendt turns her attention quite directly to the nuclear question in stating that alongside totalitarianism, nuclear weapons "ignite the question about the meaning of politics in our time,' which is so central to Arendt’s oeuvre. For Arendt (2007b), "[t]hey are fundamental experiences of our age, and if we ignore them it is as if we never lived in the world that is our world". It is here that Arendt goes further by most directly evoking the scientific fact of humanity’s cosmic origins in both cosmic life and death processes as well as its literal bringing home to Earth via processes of nuclear technology:

"[…] for it is not natural processes that are unleashed here. Instead, processes that do not occur naturally on earth are brought to earth to produce a world or destroy it. These processes themselves come from the universe surrounding the earth, and in bringing them under his control, man is here no longer acting as a natural organic being but rather as a being capable of finding its way about in the universe, despite the fact that it can live only under conditions provided by earth and its nature."[2]

More important still is the passage where Arendt (2007b) asserts that, in relation to this "horror of an energy that came from the universe":

"The emergence within politics of the possibility of absolute physical annihilation is that it renders such a retreat totally impossible. For here politics threatens the very thing that, according to the modern opinion, provides its ultimate justification--that is, the basic possibility of life for all of humanity."

To emphasise: whilst Arendt (2007b) does not give sustained attention to the nuclear question, she does enough to suggest that the nuclear age has installed the use of force between and within states as "the foremost political issue of our time". Since, for Arendt (2007b), the "ancient mistrust" of the domination so central to politics has "been transformed again" by the prospect of nuclear war, such that "[o]ut of this fear arises the hope that men will come to their senses and rid the world of politics instead of humankind". This is because in the nuclear age, the "production and destruction" become "intertwined" and "almost indistinguishable phases of the same ongoing process", has been disrupted such that "since the discovery of atomic energy, this is no longer the case". For Arendt (2007b), the nuclear age meant that a large part of the human predicament was now also "supernatural" in that "unleash[ing]" these otherwise cosmic processes on Earth had "produce[d] a world that is thoroughly non-natural".[3] That brief survey of Arendt’s nuclear thinking, however, is largely all she ever wrote about the nuclear age. Perhaps the near complete absence of a fully-fledged Arendtian nuclear theory is not so much down to it not being sufficiently developed, so much as it is a realization that her seemingly biospheric approach to the problem of nuclear harm is irreconcilable with the human-centrism characteristic of the vast majority of the nuclear literature.

Some might say that Jonathon Schell’s (1982) The Fate of the Earth attempted such an Arendtian nuclear theory. Though some, such as Foley (1982; 1983) and Richard Routley (1984), have argued quite convincingly that Schell owes more to Arendt’s former husband Günther Anders (1956; 1972) than is otherwise supposed. Schell always staunchly denied such claims, and he sadly died before I had the opportunity to talk with him in New York in 2014. Given, as Arendt herself seems to be saying, that nuclear harms are fundamentally ecological, it might be presumed that there may already be a literature to mine in Environmental Philosophy. Yet Kerry H. Whiteside’s (1994; 1998) efforts at an "Arendt-inspired  ecological politics" remain among the few such resources available--and in them absolutely no mention is made of Arendt’s nuclear thought.[4]

So if we are to have an Arendtian nuclear theory, we must now construct it ourselves.

[i] I thank Will Bach, Thomas E. Doyle II, Kei Hiruta, Naeem Inayatullah, Jerome Kohn, Robert Rands, Holmes Rolston III, and Alejandro Cheirif Wolosky, for their invaluable comments and criticisms. Despite their various interventions and improvements to my thinking, much remains to be done as I begin the work of constructing an Arendtian nuclear theory in 2017. All errors and possible misreading of Arendt and others cited here of course remain mine only.

[1] Schell speculated that this was in fact a division of labor with both Gunther Anders (1956) and Karl Jaspers (1961), who had published Die Antiquiertheit des Menschen (The Outdatedness of Human Beings) and The Future of Mankind, respectively. Arendt also, of course, had many dealings with Hans Morgenthau (1962,), who among the earliest and most forceful of the classical realists to conclude that: “[i]f a nation cannot resort to nuclear weapons without risking its own destruction, how can it support its interests?” This realisation prompted Morgenthau (1962) to go so far as to posit that the advent of nuclear weapons was the “first qualitative change in the history of international relations”, which had resulted in “a veritable revolution, the only one in recorded history, in the structure of international relations” (Morgenthau 1962). Despite having earlier suggested that one solution might be to fight a limited nuclear war (perhaps in order to retain the coherence of his theory), Morgenthau (1961) later concluded that “[n]uclear destruction destroys the meaning of death by depriving it of its individuality [and] the meaning of immortality by making both society and history impossible”. And so whereas, “[t]his longing [for the unity of humanity], in times past mainly [was] a spiritual or humanitarian impulse, in the nuclear age has been greatly strengthened by the desire, innate in all men, for self-preservation’ (Morgenthau 1962). In terms that might justify characterising Morgenthau as the first ‘fallen realist’ (see Booth 1994; Booth 1997), he reached the stunning conclusion that: “The way out of the dilemma is to transcend the two equally unacceptable alternatives of surrender or fighting a suicidal atomic war, and that means taking nuclear power out of the arsenal of individual nations altogether [by] some kind of supra-national agency which we may call a world government, because this is what it would be”. This is because, for Morgenthau (1961), “[i]t is obvious that the nuclear age has radically changed man’s relation to nature and to his fellow men”.

[2] A note of clarification on this point is necessary, since I have heard others take the nuance of Arendt’s claim beyond the limits of scientific credulity. Suffice to say, whilst it is true that the same processes that create nuclear fusion in thermonuclear weapons is precisely and exactly the same process as that which occurs inside all stars in the cosmos, the science has long suggested that nuclear fusion only occurs at much lower temperatures than those expected to have given rise to the Big Bang. Although it has not yet been established what caused the Big Bang, there is no suggestion that nuclear fusion is the singular source of all life--a process that is itself dependent on other factors such as the interplay of cosmic dust and the pervasive force of gravity.

[3] Despite the Earth and all its inhabitants being made of “star stuff”, Arendt appears to want to make a distinction here between human-induced nuclear processes and, to adopt her parlance, “naturally”-occurring ones. Of course, we now know that nuclear processes do occur “naturally” on Earth, since the Oklo reactors in Gabon were dated at over two billion years old shortly after they were discovered in the 1970s (see Davis, Gould, and Sharapov 2014).

[4] I am told that there is a small yet committed literature in Japanese that engages in a form of Arendtian nuclear thinking, although drawing parallels between the attacks on Hiroshima and Nagasaki, and the Holocaust.

Featured image: The mushroom cloud of the first test of a hydrogen bomb, "Ivy Mike", as photographed on Enewetak, an atoll in the Pacific Ocean, in 1952. (Source: Tech Insider)