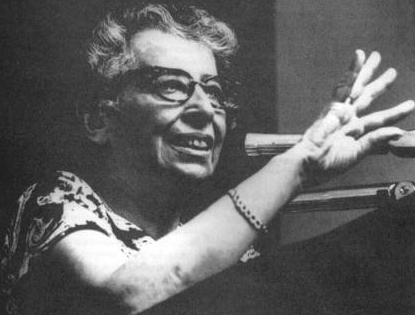 On the publication of the anthology “Denkräume”:
Hannah Arendt’s spaces of thinking and on ours today

In “The Life of the Mind”,  Hannah Arendt argues that thinking is a rebellion against the tyranny of time and a safeguard against the terror of our own finiteness. She notes that cognition removes us from the present while pondering where the thinking ego is located:

Obviously, if there is absolutely nothing, there can be nothing to think about. That we are in possession of these limiting boundary concepts enclosing our thought within (insurmountable) walls — and the notion of an absolute beginning or an absolute end is among them — does not tell us more than that we are indeed finite beings.

Spaces are created through borders, defining an inner space that then in turn generates an outer one. Boundaries, no matter if they are connected to time or place, construct spaces in which we live and work, think and write. They separate us from an outside in order to focus on the thought inside, on the matter at hand. At the same time, we stay in touch with “the outside” that we’re thinking about. Spaces, we could say, are structured in two ways: they open up possibilities and restrict them, include and close off, disconnect and connect.

The idea for this anthology Denkräume. Von Orten und Ideen (German: “Spaces of thinking. On places and ideas”) emerged in conversation during the summer of 2018. My coeditor Simone and I had rented a little cabin in the German Alps to get away from our desks for a couple days. As we walked around a mountain lake, we talked about work, and writing in particular: its process, precarious conditions. We talked about our existential fears, doubts and hesitations, the solitude of writing, and the moment of Erkenntnis (Recognition). Suddenly and unexpectedly it was there, the idea for the book: We invited others to talk and reflect upon their personal places for thinking and writing.

We quickly knew who should be part of this collection: writers, scholars, journalists. Those who articulate their thinking through writing, who reflect on their own thinking, who observe themselves and their environment sharply, and express themselves in language. Some immediately came to mind whose writings have been with us over the years, who have sparked, influenced, and inspired our own thinking. Public voices that shape the current discourse. What unites them, despite all their differences, is their ability to critically reflect upon the circumstances in which they live and write.

Clearly, thinking and writing are not always and only carried out in traditional places such as the desk or in the library, but also in spaces that aren’t originally intended for thinking. Thinking can, in principle, take place anywhere and at any time. Just as we came up with this idea at the lake – in movement, in conversation, in togetherness, there are many places and ways of thinking and writing. “Denkräume”[1] are, in this sense, potential varieties of how writing is produced under certain conditions and in a specific ways thought.

The contributors take us on a journey of thinking spaces, from the limits and possibilities of thinking within institutional space like a university, to what it’s like to think in the kitchen and shower, from unoccupied rooms and non-places, to transuranic and open spaces, to portable and volatile ones. In literary forays, we get insights into both, the experiences of the writers as well as in the orders and disorders of thinking.  Just like music and dance in the club can trigger a state of mind in which new thoughts form, say about relationships or our own private life, a walk can increase the perception and sharpen our observation. We read about collaborative thinking — with others or even alone: often times, the thoughts of others are present when for example books resonate or the conversation with oneself leads to insight. Whether at home or in a public space: thoughts often come and go unnoticed, ideas can arise when you don't expect them: in motion, in distraction, in memory. Even places of captivity - metaphorical or real - become possibilities of creativity and freedom.

For Hannah Arendt, the separation between private and public was directly linked to her understanding of thinking. Even though she never defined the two spheres thoroughly, the ability to differentiate between them is crucial for her in order to protect our freedom and our happiness. While the realm of the public space is the one of appearances in which people distinguish themselves through action, the private realm is the one of thinking. For Arendt, thinking is a withdraw by the thinking ego from the everyday life. Solitude and aloneness (not loneliness) is required to think freely off the everyday stage. In her biography on Rahel Varnhagen, Arendt writes:

“…thinking becomes limitless because it is no longer molested by anything exterior; because there is no longer any demand for action.”

It is in this isolation, in which there is no walls anymore, in which Arendt thinks ohne Geländer, without a bannister. According to Arendt, the two realms of the political and private have become blurred in our modern age which then leads to an escape from both. Conformity, bureaucracy and loneliness are the results. In this loss of the world, as Arendt calls it in Between Past and Future, totalitarian governments can flourish. This crisis may be fixed only by re-capturing the past through “the deadly impact of new thoughts” (Men in Dark Times).  Arendt reminds us of how important it is to protect our “Denkräume” and what can happen if we don’t.
[1] the German word  “Raum”, plural “Räume” is both in English, “space” and “room”