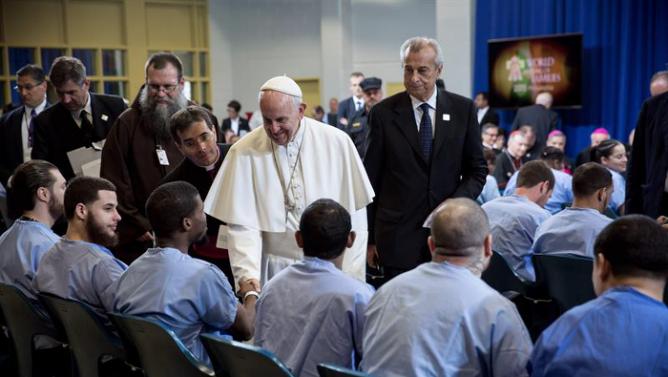 Pope Francis and Humility Before God

“The reluctance of the Church to appoint to high office those few whose sole ambition was to imitate Jesus of Nazareth is not difficult to understand. There might have been a time when people in the ecclesiastical hierarchy thought along the lines of Dostoevsky’s Grand Inquisitor, fearing that, in Luther’s words, 'the most permanent fate of God’s word is that for its sake the world is put into uproar. For the sermon of God comes in order to change and revive the whole earth to the extent that it reaches it.' But such times were long past. They had forgotten that 'to be gentle and humble…is not the same think as being weak and easygoing' as Roncalli once jotted down. This is precisely what they were going to find out, that humility before God and meekness before men are not the same…”

Included among the biographical essays in Arendt’s Men in Dark Times is a 1965 review of the memoir of Angelo Giuseppe Roncalli, better known as Pope John XXIII. The review largely neglects the content of Roncalli’s book, serving instead as an occasion for Arendt to reflect on the “strangely fascinating” facts of his tenure, that a Pope so fully invested in the world to come would be elected at all, much less make such a revolutionary impact on the ecclesiastical order or such a striking appearance on the world stage. The obstinate literalism of his faith and humility as a follower of Christ belies the confidence with which he acted, both within and against the institutions of the human world. The revolutionary quality of Roncalli’s papacy was literal. Shortly after his election, he convened the Second Vatican Council, whose modernizing reforms included allowing priests to turn around and celebrate mass versus populum (facing the congregants) and in modern vernacular rather than Latin. Vatican II was a surprise to the ecclesiastical hierarchy, who had elected Roncalli expecting him to be a “provisional and transitional Pope.” Two months before his death, he completed a major encyclical, Pacem in terris, calling for nuclear non-proliferation, the first encyclical to be published in The New York Times. In her book review, Arendt describes the apparent confidence, and even ease, with which Roncalli carried out actions that eschewed orthodoxy at all levels in favor of Christ’s exemplarity.

As Roger Berkowitz noted in an essay on the occasion of his election, the sitting Pope, Francis I, resembles John XXIII in his posture of humility. This likeness has now been born out in the tenor of his actions, which, it seems, intend to put the world into an uproar for the sake of God’s word, to the confusion, amusement, ire, and delight of commentators. The intensity of Francis I’s cultural criticism has been especially apparent during his visit to the United States, during which he challenged the conventional wisdom of partisan division--a challenge sharpened with the news of his unpublicized meeting with Kentucky County Clerk Kim Davis--and often showed greater regard for the people than the trappings of authority. And, like John XXIII, Francis has published a major encyclical on climate change, calling for action against what we might call, after Arendt, human “action into nature.” This is not to say that Jorge Maria Bergoglio is beyond reproach--the relevant criticisms are no doubt at the fingertips of any well-informed reader--but the contrast with the rest of his predecessors, immediate and throughout history, is striking. Pope Francis is applauded as he arrives to speak during a joint meeting of the U.S. Congress on Sept. 24, 2015. (Source: Slate)[/caption]

Arendt famously wrote that while “fundamental and flagrant” contradictions are rare for second-rate authors, they lead to the center of great authors’ work. We find this theme elaborated in the introduction to her doctoral thesis on Augustine’s conception of love, which was revised for publication in the early 1960s: “We must let the contradictions stand as what they are, make them understood as contradictions, and grasp what lies beneath them.” So, it is worth taking seriously the odd fit between Arendt’s analysis in “A Christian on Saint Peter’s Chair” and her canonical assessment of the relation between Christianity and action in The Human Condition. There, she is unequivocal regarding Christianity’s degradation of the public world and adamant that the good (of which Christ is the exemplary figure) is fundamentally worldless, antithetical to appearance, and incompatible with political life.

A decade later, however, Arendt included a Pope among the exemplary individuals whose lives and works illuminated the “dark times” deficient in the splendor of the public realm. In her account, Roncalli’s humility or “poverty of spirit” freed him for action, insofar as this attitude coexisted with--or perhaps gave rise to--his tremendous self-confidence and radical egalitarianism. We must attempt to grasp, then, what lies beneath her contradictory assertion that so single minded a faith is “splendid in deed and living word”--certainly Arendt’s highest, and most explicitly political, praise.