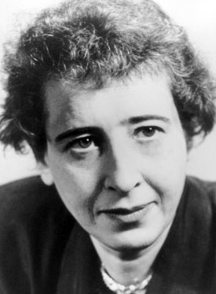 In an essay “Power Politics Triumphs” reviewing Crossroads of Two Continents by Feliks Gross, Hannah Arendt argues that the “obsoleteness of this book” is a  “consequences of the author’s pathetic faith in the validity of economic arguments.” Over and again, in modern politics, Arendt writes, it has been shown that “nobody cares” about economic arguments and that politics is not driven by economics. What Arendt learned from observing Nazi Germany and the Bolshevist Soviet Union who pursued genocide in spite of its economic uselessness, is that politics in the modern age is driven by a “new over-emphasis on power.” The Nazis and the Soviets wanted to expand their power around the world. And power, she writes, “wants nothing so much as to become an even bigger Power.”

The over-emphasis on power in politics is partly a result of the rise of what Arendt in The Origins of Totalitarianism calls the "political emancipation of the bourgeoisie," through which the bourgeois drive to amass more and more wealth is transferred to the political demand to amass more and more power. At the same time, the political drive for power is a consequence of nihilism, the devolution of the highest values into the the pursuit of power at all costs—even at the cost of destruction.

Arendt’s reflections on the over-emphasis on power in politics at the expense of economics comes to mind when reading an essay by Adam Tooze on the continuing cold war between the United States and China. For the last 30 years, Tooze writes, America’s China policy has been focused on satisfying business elites instead of pursuing American national interested.

The question asked by the American left, as well as more hard-nosed right-wingers, is not whether the US negotiators were naive or incompetent, but whose interests they were representing. Were they negotiating on behalf of the average American, or American business? As Davis and Wei show, US economic policymakers were committed to advancing the interests of American business more or less as business articulated those interests to them. US manufacturers such as Boeing, GE and Pepsi, banks like Goldman Sachs, Morgan Stanley and JP Morgan, and the insurance giant AIG all wanted the new market, and they wanted the cheap labour. From 1994, when the Clinton administration abandoned its hard line on the legacies of Tiananmen, the thrust of policy was to open up new markets and opportunities for investment, even in the face of strong objections from American trade unions.

What American policy did not anticipate, Tooze argues, is that China under President Xi Jinping has developed into a “restorationist, personality-driven model” of conservative and power-driven Communist Party leadership. What needs to be understood, Tooze argues, is that China is on a mission to become a world power—perhaps the most powerful state in the world. Tooze writes:

The mistake in thinking that we are in a ‘new Cold War’ is in thinking of it as new. In putting a full stop after 1989 we prematurely declare a Western victory. From Beijing’s point of view, there was no end of history, but a continuity – not unbroken, needless to say, and requiring constant reinterpretation, as any live political tradition does, but a continuity nevertheless. Although American hawks have only a crude understanding of China’s ideology, on this particular matter they have grasped the right end of the stick. We have to take seriously the CCP’s sense of mission. We should not comfort ourselves with the thought that because nationalism is the main mode of Chinese politics today, Xi’s administration is nothing more than a nationalist regime. China under the control of the CCP is, indeed, involved in a gigantic and novel social and political experiment enrolling one-sixth of humanity, a historic project that dwarfs that of democratic capitalism in the North Atlantic.

But to acknowledge that there are real ideological stakes is not automatically to accept that the US and its allies should gird themselves for ‘victorious’ confrontation with the communist foe. Even the Trump administration’s own strategic statements on China sensibly stop short of any talk of regime change. Having recognised what ought to have been obvious all along – that China’s regime is serious about maintaining and expanding its power and conceives of itself as having a world historic mission to rival anything in the history of the West – the question is how rapidly we can move to détente, meaning long-term co-existence with a regime radically different from our own, a long-term attitude of ‘live and let live,’ shorn of assumptions about eventual convergence and the inevitable historical triumph of the West’s economic, social and political system. It would be a long-term co-existence, in which, over time, the US may well find that it has become the junior partner or, at best, the leader of a coalition of smaller powers balancing the massive weight of China.