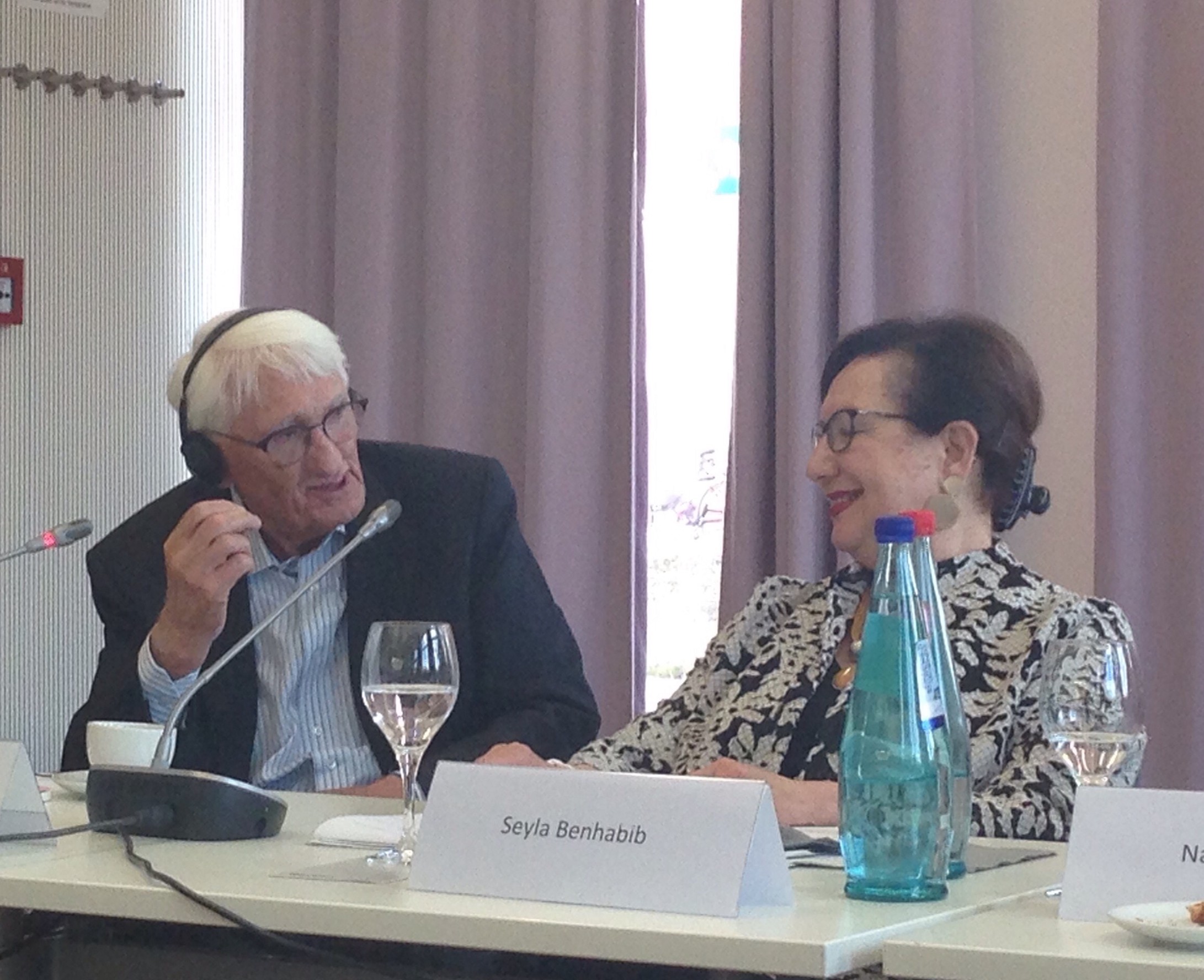 Presuppositions: Reply to Benhabib and Jay

07-13-2019
I am grateful to the Editors of Amor Mundi for sending me a copy of Prof. Benhabib’s response to my comments on her defence of Habermas, and I wonder if I might reply to her and also to some comments by Prof. Martin Jay which appeared recently in The Point
In her remarks Prof. Benhabib speaks of the ‘assumptions’ and ‘presuppositions’ we make in our social life.Of course, in everyday life we all — but who exactly is ‘we’? — make innumerable presuppositions and assumptions about the world, have commitments to and expectations about others, and would dearly love to be able to live up to various ideals we have in various ways acquired and invented. What is perhaps more important, we would dearly love to hold others to (unrealised) ideals we have, and would like (in some cases) to impose commitment to these ideals on them. If I speak French to a waiter in Lille, it is because I assume he will understand that language, and I presuppose all sorts of other things in our encounter. I also project onto him various ideas about how I think he ought to behave toward me. Some of the assumptions I make will have the form of specific bits of propositional belief ( of ‘knowing-that’) such as my thought before speaking to the waiter: ‘That looks like the waiter’. This may be thought to presuppose that I am in a café or restaurant (or that I think I am in a café or restaurant). Other assumptions may be said to be embedded in my action as forms of ‘knowing-how’ or skills, such as the various abilities I exhibit in knowing how to sit on a chair without falling over. When I say simply ‘vin rouge’ in this context,I am showing that I know how to perform the speech-act of ordering a glass of wine. It is the context which makes this action one of ordering rather than simply making a descriptive statement about my environment. ‘Ordering’ can be said to presuppose a whole set of institutional practices.
None of this is at issue; it is taken for granted and trivial. If that is all Habermas has to say, — here are a set of presuppositions we make, they are connected with many of our other institutions and we think they are bloody important — he is, as my friend Konrad Cramer thought, philosophically irrelevant. He hasn’t said anything interesting yet. Things move on only when we go on to ask three further questions:

1. how fixed and invariable are the assumptions and presuppositions ‘we’ make, or that ‘we’ could make?
2. what reasons or grounds do I have for presupposing what I presuppose?
3. what expectations and commitments can I properly impose on you

I contrast two sets of responses to these questions, the transcendentalist (say ‘Kant’) and the non-transcendentalist (say ‘Dewey’). The transcendentalist thinks (question 1.) that at least some of our basic ‘presuppositions’ are very fixed indeed, perhaps even couldn’t be changed; (question 2) that I have some very special grounds for making at least some of the basic presuppositions I (always) make; (question 3.) that I have some non-contextual reason for imposing (some of) my commitments on you. Kant and Habermas disagree about the answer to question 2: Kant appeals to ‘special grounds’ purportedly rooted in some structures of universal reason, whereas Habermas mobilises his version of speech act theory, but that, in the larger scheme of things, is a trivial distinction. In contrast to the transcendentalist, ‘Dewey’ would say (question 1) that what ‘we could’ come to assume or presuppose, is inherently undefined. The basic fact is that the future is genuinely open and our knowledge is changing and we can’t predict apodictically how it will develop. We have to act in the present, but we should do so tentatively on the basis of our best present assessment, not taking that to have any absolute standing. ‘Our best assessment’ is what we think at the moment, given our best lights, nothing more (but nothing less). These lights have to be enough, because they are all that we have (although in the future we may have, certainly, other and, perhaps, better). The motivation of the transcendentalist is the inability to tolerate this thought, namely that what is in fact cognitively available to us changes and is limited, and that nothing more than it is actually given: no God, ‘pure reason’, no ideal speech situation. ‘Dewey’s’ response to questions 2, and 3. is precisely that there are no special, non-contextual reasons or grounds for dealing with these questions.

For these reasons, then, I do not see that Habermas’ appeal to ‘speech act theory’ (rather than ‘pure Reason’) makes any difference. Prof. Benhabib writes: ‘Habermas is NOT searching for transcendental or quasi-transcendental conditions überhaupt, but… he is analysing the conceptual presuppositions which we as speaking agents make…..’ This does not address the point. If Prof. Benhabib means: ‘We make these presuppositions now in the sense in which we agree on the rules of chess in order to play a game but we could just as easily change the rules of chess or decide to play go or bridge, and, what’s more, you could unilaterally act in a way that did not conform to the rules, and I would then have to decide what to do’, this, I submit, confirms Konrad Cramer’s suspicions about the vacuousness of Habermas’ position. If I start a game of chess and then begin to ignore the rules, you may say ‘That’s not chess’, and you would be right, but so what? I may perfectly legitimately have more pressing concerns than conforming to the rules of chess.

In Chapter One of my book Changing the subject I try to discuss this. Do rules about lying, sincerity etc. have this status, like the rules of chess? To defuse Cramer’s suspicion would require saying, for instance, why we can’t change these ‘presuppositions’. Repeating that they are the ones we make, is not an answer to this. Whether the ‘assumptions’ and ‘presuppositions’ in question are associated with, or have the form of, instances of ‘knowing-how’ or of ‘knowing-that’ does not matter to the overall structure of the argument.If I say: ‘I don’t presuppose that if I were to discuss this matter with Prof. Benhabib for an indefinite period of time under ideal conditions, we would reach agreement’; she says: ‘Oh, yes you do; you just don’t know that you do.’ Why is that? No answer apart from further repetition.

Professor Jay takes a surprisingly flat-footed approach to my paper ‘A Republic of Discussion’. I begin by asking: ‘What is so wonderful about discussion?’. He then canvasses the possibility that I think that no discussion can ever be valuable in any respect at all. I go on to ask: ‘Does “communication” even exist? What if I were to deny that it does?’ Does this, he wonders, mean that I deny that communication ever takes place? So why do I bother writing? I would have thought that for a careful reader the quotation marks around ‘communication’ would be some kind of tip-off that I was speaking of someone’s conception of ‘communication’. I go on to talk about different conceptions of ‘communication’, and make it clear that my objection is to Habermas’ conception of ‘communication’ as presupposing a transcendental framework, which imposes on all speakers certain ineluctable obligations.

Habermas’ theory of the ideal speech situation is, precisely, ideal (that is, unrealised at least as yet), and Professor Jay assumes that my objection to it is that it has not yet been realised. He asks whether I would like to ‘abandon all ideals if they have not been universally achieved’. I don’t understand what I can have said to give Professor Jay this idea. What is supposed to be so wonderful about his ideals, according to Habermas, is that they are ‘transcendentally grounded’’ so we are right always to impose them on others. This is what I am at pains to deny. I and my friends have all sorts of (unrealised) ideals that are perfectly legitimate: We would like a society in which there was much more Renaissance music available for everyone to hear than there is now, but from the fact that this ideal has, we think, some value, it does not follow that we can presuppose a commitment to it in others, that we can impose it on others, or that we can expect them in any way to pursue it.

I return to Vladimir Putin, because both Prof. Bebhabib and Prof. Jay bring him up. If Prof. Jay insists that I should refrain from even well-founded criticism of liberalism because at the moment Vladimir Putin is also attacking it, this demand represents an odd version of liberalism. Many Critical Theorists were deeply suspicious of the tribal instinct expressed in the call to rally round ‘our’ institutions. Adorno thought that for the Enlightenment to remain true to its own deepest impulses, it must enlighten itself about itself. One of the most disappointing things about Habermas’ work is his complete failure to try to pursue this thought.

It is true that I simply do not believe, as Professor Jay does, that ‘legitimation’ is the ‘burning’ political (and philosophical) issue of the modern world. I think that a lot of other things are at least as ‘burning’ as the question ‘what is legitimacy?’, and that turning the focus of attention from genuinely pressing practical issues to discussion of ‘legitimacy’ often serves as a mask for the protection of entrenched existing interests. I submit that anyone who looks at ecological questions, questions about the politics of gender, and the issues raised in a pamphlet like the anonymous L’insurrection qui vient will be hard pressed to deny their importance, and equally hard pressed to force them into the Procrustean framework of a ‘legitimation theory’. Since I find that I must be hyperexplicit in this discussion, I merely mention that this does not mean that I think that ‘legitimation’ is in no sense an issue at all.

Prof. Jay suggests that I misread Adorno when I attribute to him the view that the liberal fiction of universal communication was a ‘pathology’. I took the word ‘pathology’ from Ästhetische Theorie p. 115 where Adorno speaks of ‘Unwesen’. I also refer the reader to Minima Moralia §§ 5, 130 [in addition to §50].
And I continue to hold that identities are much more resistant to transformation by discussion than philosophers have traditionally thought (and than Professor Jay seems to think), and that in most cases changes in identity do not come about through the magic force of ‘the stronger argument’ alone, but through long experience, the pressure of external events, and complex processes of re-education, including changes of circumstance and participation in new and different forms of experience, which will certainly not have the form of mere discussion.

Finally, Professor Jay states that I have ‘abandoned the very idea of grounds, reasons, or justification’. No, I reject Plato’s dichotomy: either one must be commited to Ideas (in a strong metaphysical sense) or one must accept chaos and unintelligibility, and also Habermas’ analogue: either notions of reason are transcendentally grounded in an ideal speech situation or there are no reasons at all. I decline this choice. I also decline to accept that unless I can give a full alternative account of what a ‘reason’ is, I am not at liberty to reject Habermas’ view.
Since, as I said, I don’t believe that unlimited discussion must necessarily result in consensus (which, to repeat again, does not mean that discussion is never under any circumstances useful), this is the last comment I am going to write on this issue.
Raymond Geuss, Emeritus Professor in the Faculty of Philosophy, University of Cambridge.