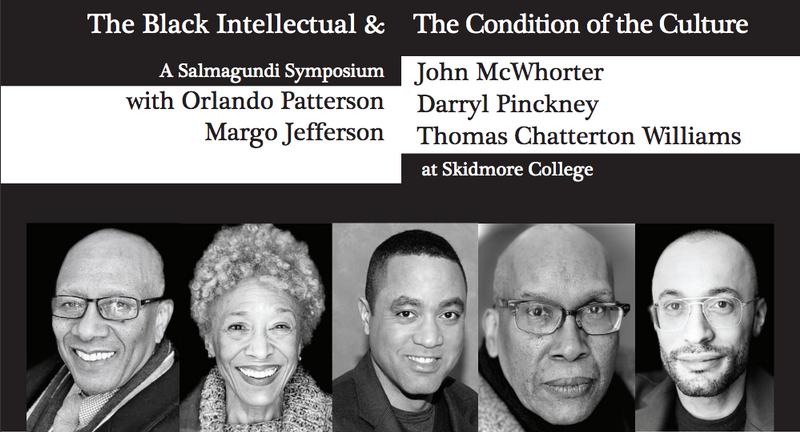 A bit over a year ago I attended a symposium on  “Black Intellectuals & The Condition of the Culture” at Skidmore College, featuring Margo Jefferson, Darryl Pinckney, Thomas Chatterton Williams, Orlando Patterson and John McWhorter. The conversations were free and provocative and at times brilliant. Now the transcripts of the symposium have been published by SALMAGUNDI. The first presentation is by current Hannah Arendt Center/NEH Distinguished Fellow Thomas Chatterton Williams. His contribution, the ensuing discussion, and all other contributions can be read here. Williams begins:

It’s an honor to be here with writers and thinkers whom I’ve looked up to and tried to model myself on for years, as I’ve tried to find my own way. In preparing for this conference over the past year, I kept returning to Bob Boyers’ original framing 1 through the lens of Harold W. Cruse’s The Crisis of the Negro Intellectual. That book is one of the works like [Allan Bloom’s] The Closing of the American Mind that people may or may not have read, but whose title alone seems to resonate with everyone for an enormous variety of reasons, though often, as is certainly the case for me, not for the same reasons that motivated the author in the first place. But as I thought about it, it occurred to me—as others have pointed out—that one of Cruse’s undeniable achievements was really just to think long and hard about what American-ness, and thus identity, means and could mean. This was an urgent project in his day, and it may indeed be of even greater urgency in our own. What would it mean to re-think American-ness in the post-Obama, post-post-racial era of Donald Trump? What I liked about Cruse was that he was so thoroughly anti-status-quo, so unimpressed with radical rhetoric that did not entail some connection with meaningful action. This is, I think—a distinction between rhetoric and action—worth dwelling on. Action can be defined pretty generously. It need not have anything to do with a determination to go out and get arrested, but at minimum, I think, moving beyond mere rhetoric requires some form of alignment between one’s words and one’s behavior.
And so I can’t help but notice that—if there is, indeed, a crisis of the Black intellectual who, by so many measures is thriving today, more sought out and provided with platforms than he or she has ever been—then it probably has something to do with this very disconnect. Many of our most audible black voices today will say things that do sound radical. In one small—but not frivolous—example, we might use a formulation like, “people who believe they are white” in their writing.” That is not at all empty rhetoric. It’s quite radical. It’s a way of saying that whiteness is not something that is real, which is a way of saying that race itself is an illusion.  This is a decades-old insight, of course. James Baldwin made the point as well as anyone. But it is nonetheless one that is, by any measure, still subversive, capable of raising many readers’ eyebrows, or worse. But many of the intellectuals using such penetrating rhetoric today too often leave it on the page. They seldom ever display the kind of radical imagination, or perhaps just the willingness to face ridicule, that would force them to conduct their lives as though they genuinely believed, or wanted to believe, that the implications of such statements were true. In fact, much of the time the rhetoric itself can seem inconsistent. And thus they represent whiteness, and therefore race, as something much more like an essence, resulting in anti-racism work that can be powerful, testimonial, well-meaning, and even convincing, yet paradoxically capable of reinforcing the same received and deeply constricting ideas of racial difference they claim elsewhere to want to counteract. And so even though this is not at all what Cruse would have meant, I have come to believe wholeheartedly that the only action sufficiently radical to accompany a statement like “people who believe they are white,” which is just a way of saying that race is a lie, is to follow that logic to its necessary endpoint. This would mean unequivocally renouncing racial categories and, to the extent possible, taking into account one’s class position and other factors, finding ways to live one’s life accordingly, in defiance of the convoluted logic upholding the color caste system. One radical, non-violent, and possibly self-sacrificing act for the black intellectual would be to start refusing to check boxes.