The New York Times today has an article about robotic friends and companions. Exhibit A is "Paro," a robot seal with artificial intelligence that coos, blinks, wriggles and generally responds to basic linguistic stimuli. Paro is primitive as AI goes, but it has been a huge hit with elderly patients in nursing homes. Often it elicits reactions and joy in patients that have been joyless for extended periods. These personal robots are part of our future, and not only in nursing homes. 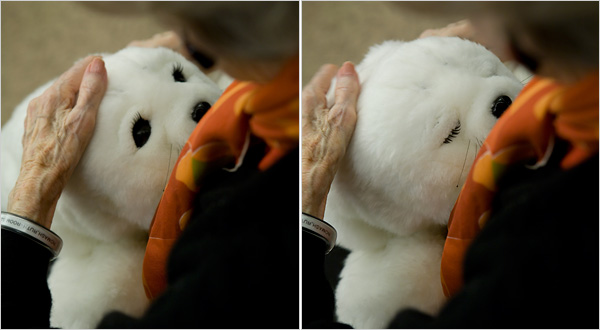 Sherry Turkle, Abby Rockefeller Mauzé Professor of the Social Studies of Science and Technology in the Program in Science, Technology, and Society at MIT, worries that as Robots become more accepted as friends, teachers, and even lovers, the quality of human friendship may be diminished:

“Paro is the beginning.”  “It’s allowing us to say, ‘A robot makes sense in this situation.’ But does it really? And then what? What about a robot that reads to your kid? A robot you tell your troubles to? Who among us will eventually be deserving enough to deserve people?”

Faithful friends are hard to find, so they may be bought more easily. We know, of course, that elderly and not-so elderly people buy companionship in the form of home aides. Parents buy companionship for their children. But these companions are human. It will be cheaper, not long from now, to purchase robotic babysitters and artificially intelligent tutors.  And once these machines arrive, what will it mean for children and adults to spend so much of their time interacting with machines, even super-intelligent machines?

“Paro is the beginning,” Turkle says. “It’s allowing us to say, ‘A robot makes sense in this situation.’ But does it really? And then what? What about a robot that reads to your kid? A robot you tell your troubles to? Who among us will eventually be deserving enough to deserve people?”

Of course many of us already spend much of days interacting with machines. These Smart Phones and Computers are still largely tools, and yet they run software that is governed by artificial intelligence, software that introduce us to our friends (Facebook), puts the world of facts at our fingertips (Wikipedia), and allows friends to converse in a mixed virtual and physical reality (Google Wave).  As Jaron Lanier has argued in You Are Not a Gadget, the collectivism of the current applications for Smart Phones and the Web is stunting rather than generating human creativity.

The Times article quotes Timothy Hornyak, author of “Loving the Machine,” who rightly advises that “We as a species have to learn how to deal with this new range of synthetic emotions that we’re experiencing — synthetic in the sense that they’re emanating from a manufactured object.”

These questions, what will it mean to be human in a world increasingly populated by smart machines, are at the center of an upcoming conference, Human Being in an Inhuman Age. The conference features Sherry Turkle and Ray Kurzweil, amongst over 20 speakers.