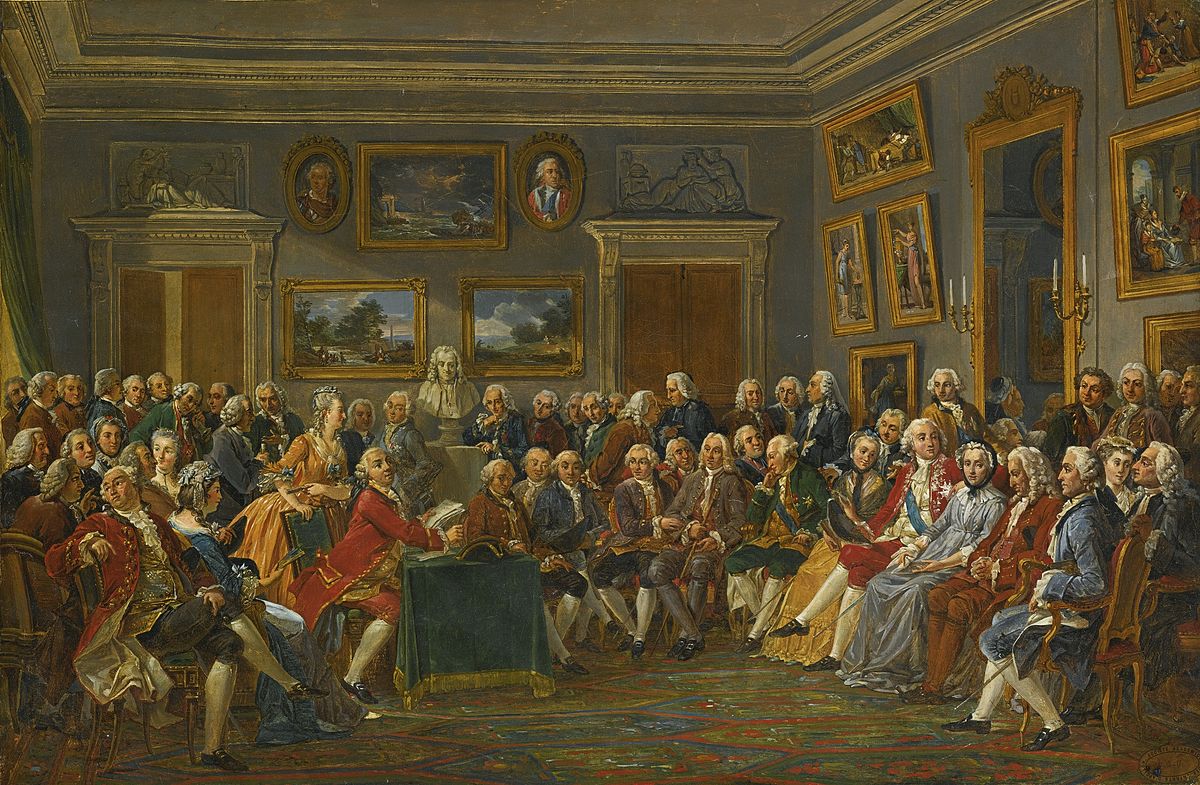 Reading of Voltaire's tragedy of the Orphan of China in the salon of Marie Thérèse Rodet Geoffrin, by Lemonnier

Rethinking Liberalism and the Enlightenment

Hannah Arendt was a decidedly anti-metaphysical and anti-universalist thinker. For Arendt, “particular questions must receive particular answers.” There are, she writes, “no general standards to determine our judgments unfailingly, no general rules.” Amidst what Arendt calls the “break in the tradition,” it is a fact that “traditional verities seem no longer to apply” and the “loss of general standards and rules--cannot be undone.” There is no going backwards to some past golden era. We must, Arendt insists, learn to live in this undetermined present where authority is absent and where “the mind of man wanders in obscurity.” What our times require, she argues, is that we “try to think and to judge and to act not without taking account of the past but without trusting the validity of any so-called lessons of history. This is difficult and uncomfortable, but it also contains great challenges and perhaps even promises.”

What does it mean to live today amidst the discomfort of the break of tradition where we must account for our past and yet refuse the validity of its lessons? For one thing, it means that the enlightenment and the liberal traditions of our past cannot be simplistically and authoritatively invoked.

It is along these lines that Ian Buruma asks about the connection between racism and the enlightenment. While past critiques of the enlightenment came from conservative critics who bemoaned the anti-authoritarian and anti-traditional elements of reason and free thinking, today “the legacies of the Enlightenment are being bashed from the left as well. Critics seek to associate both the Enlightenment and education in Greek and Roman classics with racism. Such claims were repeated in a recent New York Times article about Dan-el Padilla Peralta, a Princeton historian of Ancient Rome and a black critic of classics education. He believes that classics helped to create white racism.” Buruma counters that it is a mistake to read the enlightenment as a white and racist project. Rather than racism, he sees the problem with the enlightenment to be its aspiration to universalism.

The problem with the Enlightenment, or at least with the way its tradition has been used, was not so much “whiteness” as its claim to universality. This was part of the cosmopolitan ideal: Human reason was not confined to a particular culture or race. The two Western democracies established from revolutions based on liberty and reason were France and the United States. People of both countries like to claim the universality of their values. The founders of both countries were very much children of the Enlightenment. And leaders of both countries, from Napoleon to George W. Bush, believed that their nations had a mission to spread universal liberty to less-enlightened peoples.

The weakness of the enlightenment is baked deeply into the liberal tradition. Montesquieu follows Aristotle in insisting that limited and liberal government depend upon the virtue of citizens. Liberals such as John Stuart Mill and John Locke insisted that only some countries had citizens who were evolved enough and civilized enough to enjoy the freedoms of liberal democracy. There is, as Uday Mehtahas so powerfully argued, an Imperial project at the foundation of liberalism, one that insists that all people’s be assimilated into the values and virtues of liberal civilization before they can be allowed to enjoy the benefits of liberal government. Until that time, backwards peoples need to be governed by liberal colonialists. Much of the critique of enlightenment and liberal government is a result of this imperial drive in liberalism to insist that only those who think like liberals are capable of freedom.

It is undoubtedly true that the liberal imagination has often been racialized. The list of peoples that liberal states have sought to colonize and govern is often non-white and non-Christian. It has also been gendered. And while the last 100 years has seen women, Jews, non-whites, and former slaves welcomed into the citizenry of liberal democracies, there is still a reality that the imaginary citizen and the civilizational ideal is largely founded upon the white, European, and male prejudices from which liberalism was birthed. What would it mean, amidst this breakdown of the liberal enlightenment tradition, to account for that tradition without being beholden to it? Buruma writes:

“More and more people feel that a set of values—a civilization, if you like—is being imposed on them, a civilization loosely based on the Enlightenment, on liberalism, on the classics, and, above all, on “whiteness.” The claim that these values are universal is as obnoxious to many Americans who feel excluded from them as they were to Germans under Napoleonic rule. The old ideal of the “melting pot” is increasingly seen as forced assimilation into one white pot. Blacks, Asian-Americans, Latinos and others would like to assert their own cultures, their own values, their own representations, their own “souls.”

As Buruma argues, however, there is nothing necessarily white or male or european about the ideals of freedom and limited government. Amidst the real need to rethink the liberal tradition, Buruma argues that we should do so without painting it in racial or identitarian terms.

The question then is how to make non-white people in a Western nation feel culturally included? If the classical tradition, or the legacies of the Enlightenment, are defined as “white,” what is the cultural tradition of Asian-Americans, or Latinos, for that matter: Spanish, Chinese, Aztec, Indonesian? Any of these might apply to some Asian-Americans or Latinos, but never to all of them. And a shared set of grievances does not add up to a culture. What we are in danger of losing in the reaction to what is regarded as “white culture” is the best of the Enlightenment tradition: its profound interest, not in different ethnic groups or races, but in high cultures that can be shared. …

The best argument for continuing to read Homer, Ovid, Shakespeare or Jane Austen is not to teach people to think like whites. Quite the contrary, the whiteness of these writers is their least interesting facet. We should read them because they express a common humanity. The same is true of Du Fu, the 8th-century Chinese poet, or the best of Persian and Arab poetry, or The Tale of Genji, or indeed Léopold Senghor or James Baldwin. These are important not because they represent voices from different “communities,” but because all people can recognize something of themselves in them.