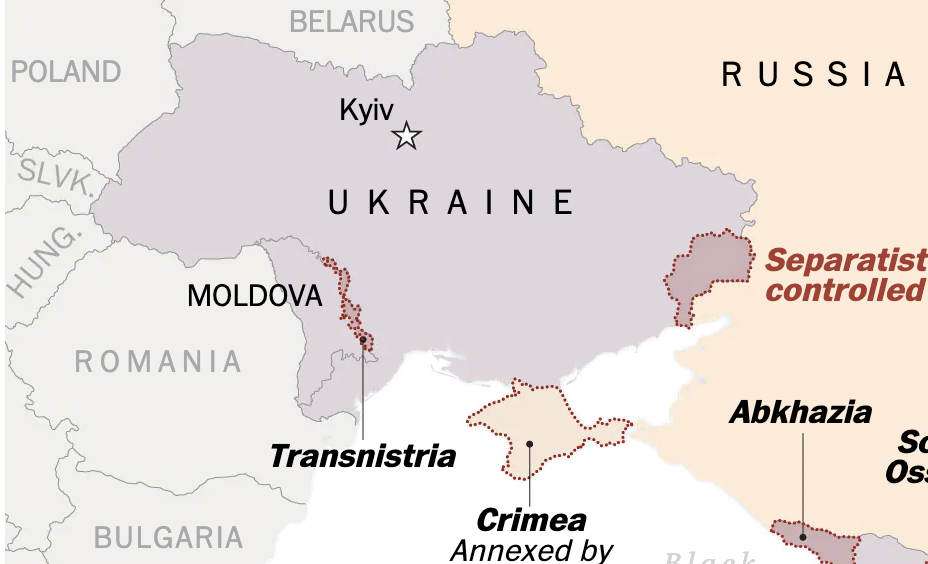 Roger Berkowitz
Hannah Arendt wrote about war, genocide, and totalitarianism. Her mantra was to look reality squarely in the face and seek to understand it and to resist it. But first to understand it. The Russian war of aggression against Ukraine is a human tragedy. It is also a geopolitical earthquake that threatens to transform the world in which we live. The audacity of Vladimir Vladimirovich Putin’s attack is hard to fathom, and indeed, many even in Ukraine seemed not to believe that the Russian tyrant would attack, even up to the final moments. Putin has defied attempts to understand and resist him for decades and he continues to make analysts and politicians look foolish. But his latest criminal attack is truly something new. As Noah Rothman writes,

We are witnessing something that just should not be. In Europe, a nationalist autocrat has launched a war of naked aggression.Vladimir Putin has not invaded Ukraine to secure its natural resources or to win Russia a better seat at the global negotiating table. He did not commit the Russian military to regime change in Ukraine because a complex web of alliances forced him to, nor did he make a thoughtful realist consideration involving the balance of power in his region. Putin is waging a war of conquest and territorial expansion to satisfy national ambition and prestige. He is prepared to subsume a whole people into a social covenant they do not accept. Moreover, if Putin’s desire to see to the “denazification” of Ukraine (a country so committed to Nazism that its elected president is Jewish) is any indication, he is prepared to liquidate those who resist. This just isn’t supposed to happen anymore. But it is.

Not since Hitler attacked the Soviet Union in 1941 has a European leader committed an act of aggression as brutal or as nakedly cynical as Mr. Putin’s utterly unprovoked attack on Ukraine. He has made himself an international outlaw and turned the great nation of Russia into a rogue state. This is a criminal war of premeditated and unjustified aggression, and Mr. Putin’s Western allies and enablers should probably check with their lawyers. The Nuremberg trials punished economic collaborators who enabled Hitler’s wars of aggression.

Thinking requires that we look at what is outrageous and seek to understand it, to take what seems irrational and make sense of it, as difficult as such an effort may be. Mead pauses for a moment to think about the incredible agony of the people in Ukraine.

One must at this moment pause to think of the long-suffering people of Ukraine. An independent Ukrainian state briefly emerged from World War I only to be plunged into the horrors of the Russian Revolution and the subsequent civil war. The scars had scarcely begun to heal when Stalin’s genocidal policies inflicted new rounds of mass death through deliberately engineered starvation and systemic repression. Then came Hitler’s invasion with all the atrocities and brutalities that Nazi occupation could bring—followed by the harsh reimposition of Soviet rule and decades of stagnation under a dictatorship of lies culminating in the Chernobyl disaster. Post-Soviet Ukraine was never a model of good governance or economic success, but after their tragic history the Ukrainian people had, and have, an incontestable moral right to determine their own future in their own way.

For local news from Ukraine from a respected source, check out the Kyiv Indpedendent.

And then Mead pivots to consider the seismic consequences of the Ukraine attack for American foreign policy and the free world. He writes:

As for the future of American foreign policy, we should not underestimate the difficulties ahead. This is not only about Ukraine, and Mr. Putin will not rest on his laurels if his gamble succeeds. Like any comic-book supervillain, he makes no secret of his goals. He aims to topple the U.S. from its global position, break the post-Cold War world order, cripple the European Union and defeat the North Atlantic Treaty Organization. Russia, even with the addition of Ukraine, does not have China’s superpower potential. But given the incompatibility of its goals with American interests and its demonstrated ability to punch above its economic weight, Russia poses threats that the U.S. cannot afford to ignore.
It would have been better to deal with Mr. Putin’s challenge in 2008, when he invaded Georgia, or 2014, at the time of his first invasions of Ukraine. Russia was weaker, China was less challenging, and the U.S. was in a stronger international position. But the American political system elected to kick the can down the road, and here we are. We will have to face an empowered Russia and a resurgent China at the same time, and this complex and dangerous task will require better and more-focused political leadership than Americans have known in this century.
President Biden must use the shock and horror of Russian aggression in Ukraine to build an allied and domestic consensus for a reinvigorated foreign policy. Many of the strategies come from Ronald Reagan’s playbook. We can massively outspend Russia on defense and cyber capabilities. We can marginalize Russia diplomatically while attacking its oil income and limiting its access to technology. We must solidify our alliances while degrading Russian influence everywhere from Syria and Libya to Venezuela, Cuba and beyond.