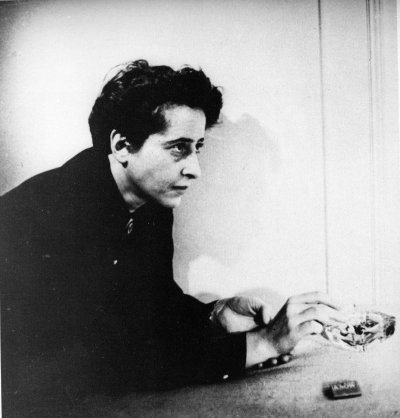 Should Activists Use Violence to Create Social Change?

“In politics, we are concerned with the world and not with ourselves.”

— Hannah Arendt
In a 1967, Hannah Arendt had a discussion with Noam Chomsky and other prominent antiwar movement intellectuals on “The Legitimacy of Violence as a Political Act?” Their chat was recorded and published in an obscure volume on “Dissent, Power, and Confrontation.” (Read the dialogue here.) This text was a core component of a course I co-taught with Chiara Ricciardone for Activist Graduate School at the Hannah Arendt Center on How to Change the World.

If you read the transcript of this provocative discussion, you’ll notice that everyone except for Hannah Arendt interprets the question of the legitimacy of violence as if it were a moral question. Chomsky et al argue that one should embrace nonviolence because of the impact committing violence has upon oneself — when we hurt others we hurt ourselves. From this line of thinking, and this was Chomsky’s main point, activists ought to use violence only when a nonviolent alternative does not exist. The kicker is that, Chomsky argues, it is practically impossible to find a situation when a nonviolent option does not exist. Therefore, violence cannot in good conscience be resorted to by activists.

The idea that if any form of nonviolence is possible then violence must be rejected is a powerful argument. It continues to underpin the strategies of many contemporary activists.

And yet, as Arendt rejoins, there is a reason to consider the legitimacy of violence from a political, not moral, perspective:

When I made my first remarks, I was very conscious of leaving out all moral considerations — partly because this would very much complicate the matter, but partly also because I was so sure that everybody else on this panel would invariably raise the moral question and I must say this has been done even more than I expected.

Explaining further why we ought to be attuned with the political legitimacy not moral legitimacy of violence, Arendt says:

In the 50 years since Arendt spoke, this concern with ourselves, in lieu of a concern with the world, has only increased. In the evolution of the New Left of the 1960s/1970s to the Millennial Left of the 2000s/2010s, this overemphasis on moral legitimacy — fitting into the image of a good person — has resulted in an activist culture that thinks winning is living a progressive lifestyle: recycling, eating organic, voting. This turn toward a concern for oneself is symptomatic of the shift away from revolution and toward reform and, I’d argue, the result of the trauma the Baby Boomer generation of activists experienced when they saw the cruel consequences — gulags, political assassinations, famine — of the great communist revolutions.

Arendt focuses on the question of political legitimacy because she is a philosopher of revolution. Arendt understands that politics requires participants to do acts that are legally wrong, and sometimes morally dubious, and that, in fact, this elevation of concern for the world over concern for oneself is one of the signatures of a revolutionary moment.

That the activist elite in 1967 was thinking about success in terms of moral legitimacy may explain why their successive protest failed to pull off a revolution in America. And that activists are continuing to think in these terms today ought to serve as a warning.
Failing to think about political legitimacy is a symptom of an activism degraded into reformism. When activists begin to wonder about the source of their protest movement’s political legitimacy it opens up a can of revolutionary worms about how to win, and hold power in a way that is recognized by the existing global power structures.

How we answer the question of the legitimacy of violence reveals the intended aim of our activism: is the goal of our activism to take political power or is it to be a moral person? Or, put simply, are we trying to change how other people, as a community, live or how we, as individuals, live? To decide whether to commit violence, the only real test for an activist, from a political perspective, is whether that violence would lead to the political legitimacy sufficient to enforce change. This is a more difficult question than it may at first seem. Today we see a continued failure among activists to understand the movement’s sources of political legitimacy and mechanisms for capturing, and holding, political power legitimately.

When we ask whether an act is politically legitimate, we are not concerned with whether or not it is justified. Violence may be justified but still inopportune or counter-productive. Our concern is whether that violence could lead our movement into a position of political power recognized by others as legitimate. In other words, will an act of violence allow the protest movement to hold sovereignty afterwards? If not, then the act violence would be illegitimate. If so, then an activists would be forced to consider it despite moral qualms.

Activists and movements that want to be successful in a revolution are acutely aware that they must attain the right to govern after the revolution. And this, for Arendt, was the most compelling argument against the legitimacy of violence in 1967. In her remarks, Arendt distinguishes between power and violence and saw violence as a symptom of the lack of power:

Generally speaking, violence always arises out of impotence. It is the hope of those who have no power to find a substitution for it — and this hope, I think, is in vain. Violence can destroy power, but it can never replace it.

American activists live in a constitutional democracy with well-established pathways for the peaceful transfer of power. Even if you are successful in overthrowing the US government, defeating their military, carrying out some grand 20th century style revolution, you wouldn’t necessarily have the constitutional legitimacy to be the government after the revolution. Therefore, success through violence alone means that large segments of the population — patriots — would be legally permitted to resist. Trying to replace power with violence breeds civil war. I am reminded of the Oath of Demophantos that obligated ancient Athenian citizens to kill anti-democratic tyrants.

Arendt challenges activists to wonder if you can lose by winning. Could violence be a way that a movement might win temporarily and lose permanently?

Ultimately, the legitimacy of violence cannot be decided upon unless we have heard from those who advocate violence. In the dialogue, this pro-violence position is taken up by a “Man in the Audience,” the only speaker who is unnamed. In many ways he echoes Arendt by arguing that sometimes violence is a necessary strategic decision:

There’s the failure of various methods to effect change — such methods as electoral politics, community organization, nonviolent demonstrations, appeals to the government, petitions, rallies, letter-writing campaigns. In most cases when people participate in politically direct violence, it is in the context of that failure. […] You can’t condemn the violence of others who can’t wait for you.

To which Arendt replies favorably, signaling that violence might be inopportune in their historical moment but it might be legitimate in the future: “At any rate things in this country are not yet decided by violence, even though this country has embarked — and in this I agree with you — on an imperialist course. If it continues on this course, then there will indeed by violence and of a different form and order than what now exists.”

In the final analysis, the question of whether violence is legitimate cannot be resolved in a manner that gives a timeless, definitive answer. Instead, if activists want to transform how power functions, then they will need to have to have a compelling strategy for how the power will legitimately transfer to their movement. Without this strategy, they could be the best people in the world and still far from creating the social change that they ostensibly desire.
Micah White is the lifelong activist who co-created Occupy Wall Street, a global social movement that spread to 82 countries, while an editor of Adbusters magazine. He is the author of The End of Protest which has been translated into German and Greek. His essays have been published in the Washington Post, the New York Times, the Guardian and beyond. He has been profiled by the New Yorker, Esquire and more. He is the co-founder of Activist Graduate School, an online school taught by, and for, experienced activists.