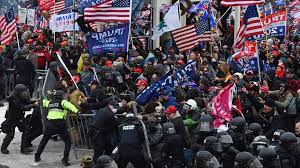 A new study by the University of Chicago Project on Security and Threats (CPOST) has some startling conclusions. Twenty One Million Americans or 8.1% of the population—more than one quarter of all adults—are “insurrectionists” who believe that the last election was stolen.  Sixty three percent of Americans believe that “African American people or Hispanic people in our country will eventually have more rights than whites.” Over fifty percent of these insurrectionists a adherents of the QAnon conspiracy that believes “A secret group of Satan-worshipping pedophiles is ruling the US government.” The authors of the report argue that the seriousness of the insurrectionist threat must be taken seriously.

Without a sound risk analysis of the drivers of American political violence, it is hard to see how developing policies, far less strategies to mitigate the risk of future election-related violence, could be genuinely possible.

As the 2022 election season fast approaches — along with the potential for distorting election outcomes — understanding American political violence must surely be a national priority if democracy is to hold the line.