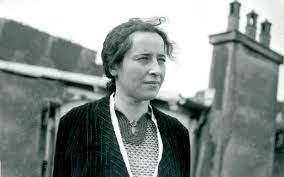 Felix Heidenreich writes about how Hannah Arendt has become an iconic and even mythic thinker in Germany today, and one might say also outside of Germany as well. He argues that “The fascination for Arendt is comprehensible and fertile as long as Arendt is taken seriously as a philosopher” or at least as a political thinker. This requires that we read and engage with Arendt seriously and rigorously, exploring the ways she challenges our orthodoxies whether or not we agree with her challenges. Indeed, what makes Arendt so meaningful today is not that she answers our questions, but that she is a model of a thinker willing to confront the uncomfortable truths of our political and ethical world and think through her own response to the problems and tragedies of our world.

In Germany today, Hannah Arendt has become what is in French called a lieu de mémoire, a symbol, a cluster of layers of imagination surrounding an actual historical core. In order to disentangle the different levels of the phenomenon it seems helpful to distinguish three different objects that are often mixed. First there is Hannah Arendt herself, Hannah Arendt “the way she really was” (Arendt I). Finding out what kind of person she actually was is an important and, to say the least, challenging task for biographers, a task never fully to be achieved. We do have some clues in her diaries, notebooks and letters,and in the testimonies of the people who knew her. However, we should be extremely cautious about making claims concerning Arendt herself. In a way,claims regarding her “real” or “deeper” intentions always remain in the field of speculation and therefore Arendt I is more a regulative idea in Kant’s sensethan an actual object. This first level is the object of biographers or psychologists, who have great obstacles to determine the “authentic” person. Even diaries can be used to create a certain image, as we know from many examples such as Thomas Mann.

Then there is a second layer of the phenomenon “Hannah Arendt”: the idea she had of herself, the role model she tried to incorporate, the image she tried to produce in public (Arendt II). Everybody of course always plays a social role and more or less consciously gives signals about his or her “ideal self”. On this second level, Arendt’s idea of what she called Political Theory plays an important role, since it is deeply linked with the way she wrote and presented herself in public. In philosophy in particular, we will find very different role models such as the “genius” or the “apostle”, a distinction drawn by Kierkegaard who distinguished two archetypal modes of practising philosophy.This second layer is what the philosophical debate should mainly work on, because here the concept of philosophy or theory is at stake.

And then there is a third layer, “Hannah Arendt” as a lieu de mémoire: a topos of collective memory. On this third level, we can analyse the image that is produced and reproduced, the myth surrounding Hannah Arendt (Arendt III). This third layer is treated by intellectual history or the sociology of knowledge (the famous “Wissenssoziologie” invented by Karl Mannheim). A classical approach in the field of history focusing on this third layer would be the French idea of “realms of memory”. In literature departments we also analyse the history of reception (Rezeptionsgeschichte).

One criticism Heidenreich offers concerns the movie “Hannah Arendt” by Marguerite von Trotta. Specifically, he objects to a scene near the end of the movie where Arendt is accosted by three Mossad agents who threaten her. Heidenreich objects to the conflation of Mossad agents with Gestapo agents and writes that no one has provided the historical foundation for this anecdote. He is partly right. In dozens of talks about the film I argued that this scene was one of the examples of the movie taking somewhat extreme cinematic license. The actual background for the scene is a series of letters between Arendt and her old friend turned Israeli agent Siegfried Moses in which Moses did ask her, quite firmly, to withdraw publication of her book. Arendt equally strongly refused. So there is some truth behind the idea of an Israeli representative asking Arendt to withdraw her book; and yet, it is also the case, that the tense encounter in which Arendt is ambushed by three agents who threaten her not only never happened but also suggests a wildly disproportionate Israeli reaction. Whether one accepts this cinematic license will determine how one reacts to the film. What is important is that we confront cinematic portraits with reality.