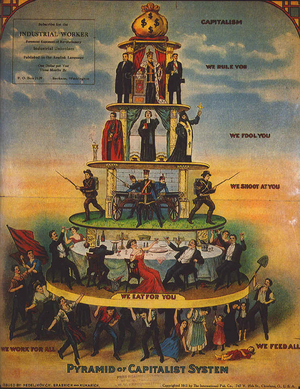 Many in this 9.9 percent have much of their wealth tied up in a house or houses and don’t feel wealthy; they don’t see themselves as part of the problem. But what these new aristocrats want, above all, is to be able to secure their hard-won privileges for their children. They participate in a system that gives their children immense advantages in education and economic security. They have allowed a tax system to emerge that is funded increasingly by regressive sales, payroll, and property taxes and is filled with loopholes for the top 9.9%. The result is that the storied American dream of income mobility has diminished as the new aristocrats seek to pull up the ladders and make financial security hereditary. As the 9.9% have emerged as the new aristocrats, we delude ourselves, Stewart writes, that we don’t have any privileges at all. And if we refuse to see ourselves for who we are, others are waking up.

Finally, the rise of populist politicians like Donald Trump is, Stewart argues, in large part driven by resentment aimed at the new aristocrats. “The first thing to know about the substantial majority of [Trump voters]  is that they weren’t the winners in the new economy.” The first step in confronting the new aristocrats, he suggests, is realizing that they are “we.” Read Stewart’s report here.

So what kind of characters are we, the 9.9 percent? We are mostly not like those flamboyant political manipulators from the 0.1 percent. We’re a well-behaved, flannel-suited crowd of lawyers, doctors, dentists, mid-level investment bankers, M.B.A.s with opaque job titles, and assorted other professionals—the kind of people you might invite to dinner. In fact, we’re so self-effacing, we deny our own existence. We keep insisting that we’re “middle class.”

As of 2016, it took $1.2 million in net worth to make it into the 9.9 percent; $2.4 million to reach the group’s median; and $10 million to get into the top 0.9 percent. (And if you’re not there yet, relax: Our club is open to people who are on the right track and have the right attitude.) “We are the 99 percent” sounds righteous, but it’s a slogan, not an analysis. The families at our end of the spectrum wouldn’t know what to do with a pitchfork.

We are also mostly, but not entirely, white. According to a Pew Research Center analysis, African Americans represent 1.9 percent of the top 10th of households in wealth; Hispanics, 2.4 percent; and all other minorities, including Asian and multiracial individuals, 8.8 percent—even though those groups together account for 35 percent of the total population.

One of the hazards of life in the 9.9 percent is that our necks get stuck in the upward position. We gaze upon the 0.1 percent with a mixture of awe, envy, and eagerness to obey. As a consequence, we are missing the other big story of our time. We have left the 90 percent in the dust—and we’ve been quietly tossing down roadblocks behind us to make sure that they never catch up.

Let’s suppose that you start off right in the middle of the American wealth distribution. How high would you have to jump to make it into the 9.9 percent? In financial terms, the measurement is easy and the trend is unmistakable. In 1963, you would have needed to multiply your wealth six times. By 2016, you would have needed to leap twice as high—increasing your wealth 12-fold—to scrape into our group. If you boldly aspired to reach the middle of our group rather than its lower edge, you’d have needed to multiply your wealth by a factor of 25. On this measure, the 2010s look much like the 1920s.

If you are starting at the median for people of color, you’ll want to practice your financial pole-vaulting. The Institute for Policy Studies calculated that, setting aside money invested in “durable goods” such as furniture and a family car, the median black family had net wealth of $1,700 in 2013, and the median Latino family had $2,000, compared with $116,800 for the median white family. A 2015 study in Boston found that the wealth of the median white family there was $247,500, while the wealth of the median African American family was $8. That is not a typo. That’s two grande cappuccinos. That and another 300,000 cups of coffee will get you into the 9.9 percent….

The raging polarization of American political life is not the consequence of bad manners or a lack of mutual understanding. It is just the loud aftermath of escalating inequality. It could not have happened without the 0.1 percent (or, rather, an aggressive subset of its members). Wealth always preserves itself by dividing the opposition. The Gatsby Curve does not merely cause barriers to be built on the ground; it mandates the construction of walls that run through other people’s minds.

But that is not to let the 9.9 percent off the hook. We may not be the ones funding the race-baiting, but we are the ones hoarding the opportunities of daily life. We are the staff that runs the machine that funnels resources from the 90 percent to the 0.1 percent. We’ve been happy to take our cut of the spoils. We’ve looked on with smug disdain as our labors have brought forth a population prone to resentment and ripe for manipulation. We should be prepared to embrace the consequences.