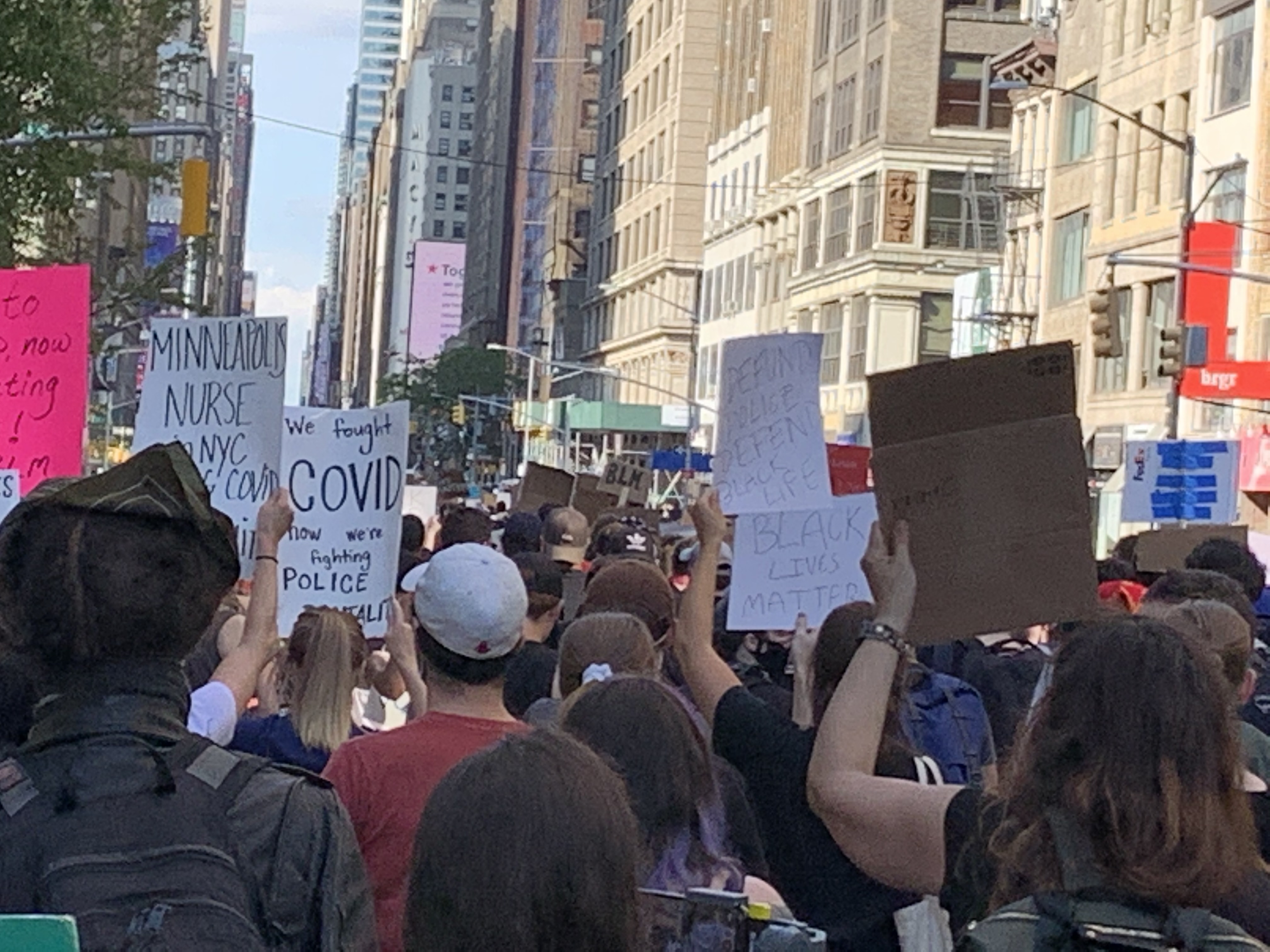 The Power Behind the Revolution

Whether George Floyd died from asphyxiation or some combination of “cardiopulmonary arrest complicating law enforcement subdual, restraint, and neck compression,” as the official Hennepin County autopsy has it, anyone can see that former police officer Derek Chauvin sat firmly on Mr. Floyd’s neck, left hand casually in his pocket as if bored, for over 8 minutes while three other officers calmly looked on. Even as observers on the scene screamed out the obvious—that former officer Chauvin was murdering George Floyd—the officers barely flinched in their slow-motion murder—murder of a gruesome kind. It was done to an unarmed black man in handcuffs with a nonchalance that can only be explained either by psychopathy or racism.

The video of the murder has made manifest the pathology of police treatment of black men . It comes on the heels of the video of Amy Cooper—a white woman with her dog who sought (and failed) to mobilize the power of her whiteness to threaten a black man and his blackness in New York’s Central Park. There was also the video of two white men confronting and shooting Ahmaud Arbery in Georgia while he was jogging. And then, suddenly in the background, the Covid-19 pandemic which, for a host of structural and historical reasons, has torn through the African American community with disproportionate mortal and economic force. The confluence of these events exposed the recurrent attacks on their dignity that black men and women encounter on a repeated basis.

Hundreds of thousands of people young and old have taken to the streets to express their grief and their rage—and their hope. The protests,  not to say an official, federal reaction to the murder of George Floyd, are long overdue. But in the protests, it would be wrong not to see something profoundly  heartening—the halting progress that the Movement for Black Lives has brought about in the last five years.

All four officers present and accountable for the murder of George Floyd were immediately fired, which was necessary if insufficient, and nonetheless unthinkable before Ferguson. First, officer Chauvin was swiftly charged with murder. Now, the other three officers have been charged with aiding and abetting murder. Racism will not soon be eradicated. But it is possible and essential to take decisive action to ensure that police brutality and racialized policing are put to an end.

The protests that have erupted around the country and the world are a testament to a radical “change in the mindset...in the conversation around systemic racism and police killings of unarmed black Americans.” These are the words of former President Barack Obama. There is a sudden, palpable intolerance for these actions; and there is understanding and anger at the indignities and harms that black and brown Americans, especially black men, have to endure on an ongoing basis.

The protests in dozens of cities across the country are best understood to be inspiring acts of civil disobedience, acts which  Hannah Arendt understood to be deeply political. Civil disobedience, which for Arendt is a fundamental constitutional right in the United States, is an action undertaken by “organized minorities, bound together by common opinion, rather than by common interests.”

It is not only an interest in safety and security or even dignity that unites the protesters. It is a political opinion first: that rogue policing, magnified by conscious or unconscious racism, combined with longstanding social inequalities, that have made it dangerous and ruinous to be a black person in the United States today.  It is a political opinion that these indignities and inequalities can and must change—now.

The protesters have made the decision, as Arendt wrote in words that speak to this new moment, “to take a stand against the government’s policies even if they have reason to assume that these policies are backed by the majority; their concerted action springs from an agreement with each other, and it is this agreement that lends credence and conviction to their opinion, no matter how they may originally have arrived at it.” By risking their lives—both in the face of police violence and the coronavirus—these civil disobedients are engaging in the kind of courageous political action that Hannah Arendt so valued. What is going on is neither protest nor riot: it is a mobilization of political action through civil disobedience, and it is unfolding on a scale not seen in my lifetime.

The civil disobedience we witness around the country is an extraordinary political moment. It has the potential to bring about important and lasting change. Already municipalities are banning choke holds. Minneapolis is investigating its police department. A bi-partisan bill in Congress would end the militarization of local police forces. There is a recognition of the need to actively change our culture of policing. What is more, there is a meaningful chance these changes and more will be made to take effect.

The greatest threat to the political movement we are witnessing is the glorification of violence that has emerged on its fringes. I am not talking only about the looting and rioting—actions that have been and must be condemned and distinguished from civil disobedience. Nor am I talking about excessive violence by police and even in President Trump’s authoritarian fantasy of military units—actions that must be condemned, while at the same time distinguished from the need for police to protect communities they serve. I refer to the justifications flooding my Twitter feed for burning police cars and buildings, the throwing of molotov cocktails, and the claims that violence is a necessary evil or even a positive good, either as a response to police violence or as an outlet for pent-up frustrations. Thankfully, such violence and its justifications are still outliers in what is overwhelmingly a peaceful if civilly-disobedient movement. Still, it is important to take these claims seriously.

The glorification of violence has intellectual credibility; it is not new and it has theoretical roots in writings by Frantz Fanon, Jean-Paul Sartre, and others. For Fanon, “The colonized man finds his freedom in and through violence.” There are two stages of how freedom is actualized through violence in Fanon’s telling. First, a kind of spiritual freedom is actualized through violence against the oppressor; in the act of resistance, the oppressed claims a psychological liberation. Only then can the now cleansed and liberated subject seek to enact a second stage of freedom by building a new society outside of colonial domination. In the first moment, the colonized subject calls into question the status quo and violates it. Only afterwards can the newly liberated subject begin to enact their freedom as a full human being.

As some protests around the country turned violent over the weekend, Neil Roberts posted an excellent essay “Fanon, Sartre, Violence, and Freedom.” Roberts develops Fanon’s distinction between what he calls instrumental and intrinsic violence. Instrumental violence sees violence as a calculated means toward an end. Intrinsic violence values the violent act positively as an expression of freedom. Violence understood as intrinsic to human freedom is, in Sartre’s words, “man recreating himself.”

Roberts turns to Hannah Arendt and her critique of Fanon and Sartre in her essay “On Violence.” Contra Fanon and Sartre, Arendt argues that violence is instrumental and not intrinsic (her word is organic). Violence is instrumental in a double sense. First that it is carried out through instruments. And second in that it seeks to achieve a certain end. Violence can therefore be justified when the means of violence is appropriate towards a justifiable end.

Arendt offers examples of when violence is instrumentally justified. Violence “can serve to dramatize grievances and bring them to public attention…. Sometimes ‘violence is the only way of ensuring a hearing for moderation.’” There are, she writes invoking the example of Billy Budd, “in private as well as public life” situations in which “the very swiftness of a violent act may be the only appropriate remedy...is the only way to set the scales of justice right again.”

The problem with instrumental justifications for violence, Arendt adds, is that while violence sometimes pays, “it pays indiscriminately.” Violence unleashes unpredictable and uncontrollable forces. And since we have little control over how our violence works in the world, “violence can remain rational only if it pursues short-term goals.” For Arendt, “Violence does not promote causes, neither history nor revolution, neither progress nor reaction.” All that violence can do is make injustice visible. When it seeks to do more, the most probable result is not justice but “a more violent world.”

But then how can we achieve political change? Arendt’s answer is that instead of violence, we must cultivate power. For Arendt, violence is not opposed to non-violence; it is opposed to power. Power emerges from collective action, from people banding together and thus building networks of collective action that acquire, in a democracy, persuasive power. When organized minorities protest or engage in  acts of civil disobedience, their open defiance of the law performed in public takes the form not of a rebellion but of an organized minority that is “too important, not merely in numbers, but in quality of opinion, to be safely disregarded.” Such civil disobedients are not “rebels and traitors.” And yet the “civil disobedient shares with the revolutionary the wish ‘to change the world.’”

Not violence but power is, for Arendt, the path to revolutionary change. Such power emerges as the free capacity of a group of people acting together to assert their agency and view of the world. In Arendt’s theory, violence only emerges when power fails as a replacement for the loss of power. To build a more just world, to bring freedom to be not simply as resistance but as something positive, requires power.

We are witnessing the rise of a revolutionary movement of political civil disobedience with the power to reimagine the tragedy that is race in America. To witness so many young people find their voices and inhabit their power is truly invigorating. Amidst so many platitudes about apathy and disenfranchisement, the present civil disobedience sweeping across the United States is a profound political engagement. There is a real possibility for the emergence of a revolution that would transform our world, not by tearing it down, but by returning it to its never-realized fundamental principles. That promise persists, so long as we recall that the possibility of revolution comes not from violence but from the power of the people.