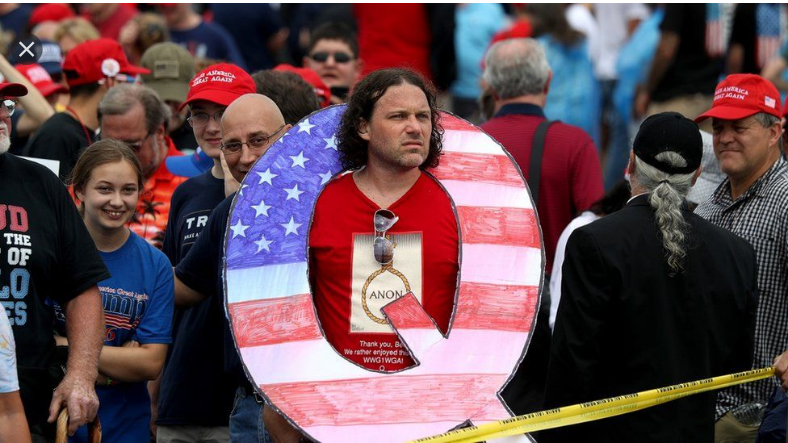 The QAnon Conspiracy is Still Here

Politics is about opinion not truth. This is one of Hannah Arendt’s central insights. At the same time, however, every political community must have some truths that it shares, that it holds in common, that unites it as a collective political body. These truths are not “objective,” but they are shared stories and ideals that form, in Arendt’s words, “the ground on which we stand and teh sky that stretches above us.” This common recognition of the  ground and sky is something that must be nurtured; once shattered, it takes generations to rebuild such a common world. The great challenge to politics today is the splintering of the public world through conspiracy theories and alternative facts that are splitting the United States into two countries inhabiting alternative common worlds. Any effort to combat that loss of the shared world must begin with a recognition of the depth of the problem. Thus is it is worth reading  Thomas Edsall’s essay that asks leading psychologists and political thinkers what is it that lies behind the hold of the Qanon conspiracy on so many Americans.

Uscinski and two collaborators, in their 2016 paper, “What Drives Conspiratorial Beliefs? The Role of Informational Cues and Predispositions,” describe how they identify likely conspiracy believers by asking respondents whether they agree or disagree with the following statements:

“Events like wars, the recession, and the outcomes of elections are controlled by small groups of people who are working in secret against the rest of us”; “Much of our lives are being controlled by plots hatched in secret places”; “Even though we live in a democracy, a few people will always run things anyway”; “The people who really ‘run’ the country, are not known to the voters.”

Believers in conspiracies will often automatically dismiss factual claims disputing their beliefs. Jovan Byford, a senior lecturer in psychology at the Open University in England, makes the case that
Conspiracy theories seduce not so much through the power of argument, but through the intensity of the passions that they stir. Underpinning conspiracy theories are feelings of resentment, indignation and disenchantment about the world. They are stories about good and evil, as much as about what is true.

Lack of evidence of a conspiracy, or positive proof against its existence, is taken by believers as evidence of the craftiness of those behind the plot, and their ability to dupe the public.

There are five common ingredients to conspiracy theories, according to Jan-Willem van Prooijen and Mark van Vugt, professors of psychology at the Vrije Universiteit Amsterdam, in their paper “Conspiracy Theories: Evolved Functions and Psychological Mechanisms.”