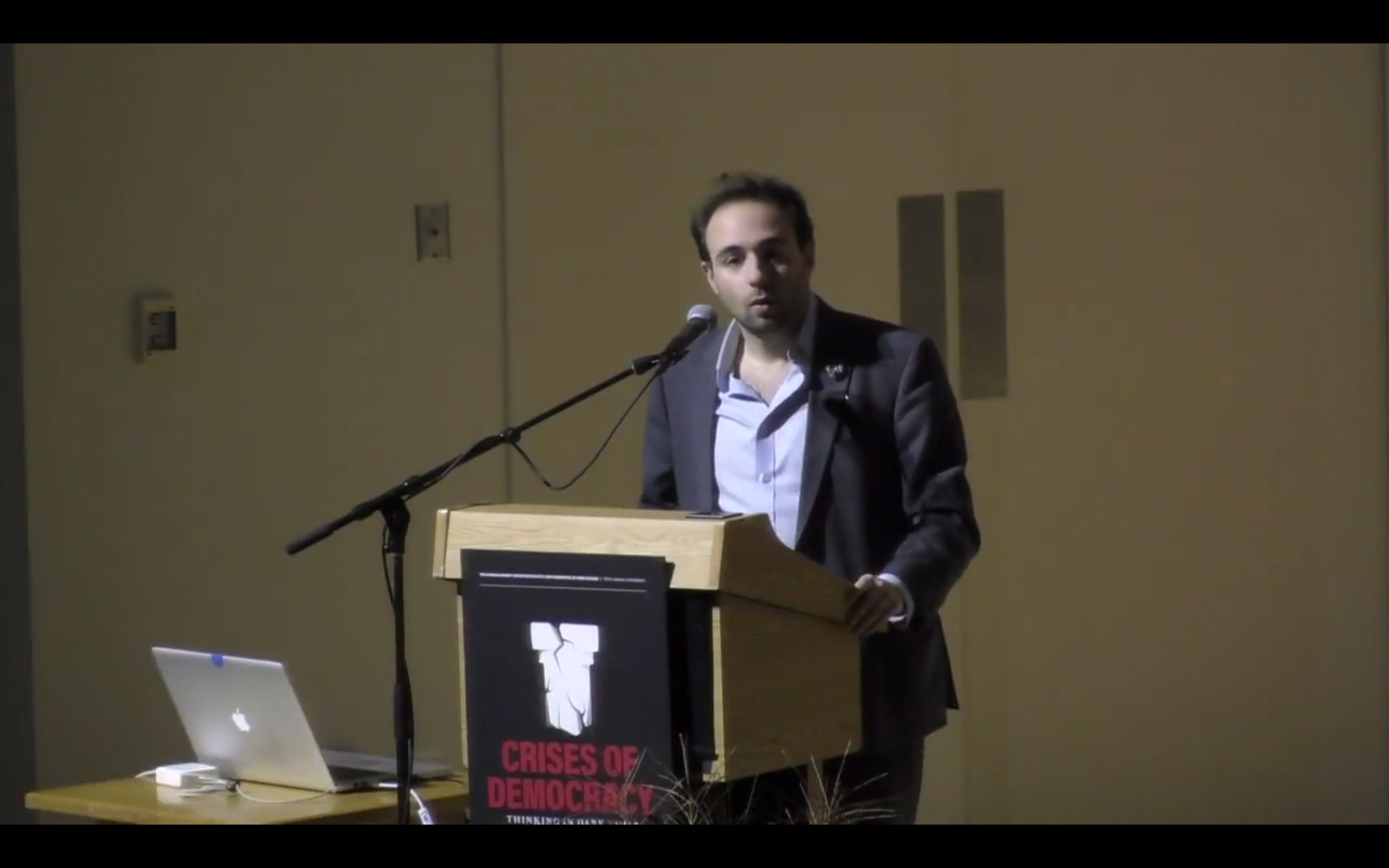 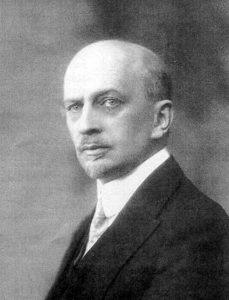 Timothy Snyder looks to the Russian Philosopher Ivan Ilyin to understand, first, fascism, and, second, the return of fascism in Russia today.

“Thus this Russian philosopher, whose name was Ivan Ilyin, came to imagine a Russian Christian fascism. Born in 1883, he finished a dissertation on God’s worldly failure just before the Russian Revolution of 1917. Expelled from his homeland in 1922 by the Soviet power he despised, he embraced the cause of Benito Mussolini and completed an apology for political violence in 1925. In German and Swiss exile, he wrote in the 1920s and 1930s for White Russian exiles who had fled after defeat in the Russian civil war, and in the 1940s and 1950s for future Russians who would see the end of the Soviet power. A tireless worker, Ilyin produced about twenty books in Russian, and another twenty in German. Some of his work has a rambling and commonsensical character, and it is easy to find tensions and contradictions. One current of thought that is coherent over the decades, however, is his metaphysical and moral justification for political totalitarianism, which he expressed in practical outlines for a fascist state. A crucial concept was “law” or “legal consciousness” (pravosoznanie). For the young Ilyin, writing before the Revolution, law embodied the hope that Russians would partake in a universal consciousness that would allow Russia to create a modern state. For the mature, counter-revolutionary Ilyin, a particular consciousness (“heart” or “soul,” not “mind”) permitted Russians to experience the arbitrary claims of power as law. Though he died forgotten, in 1954, Ilyin’s work was revived after collapse of the Soviet Union in 1991, and guides the men who rule Russia today. The Russian Federation of the early twenty-first century is a new country, formed in 1991 from the territory of the Russian republic of the Soviet Union. It is smaller than the old Russian Empire, and separated from it in time by the intervening seven decades of Soviet history. Yet the Russian Federation of today does resemble the Russian Empire of Ilyin’s youth in one crucial respect: it has not established the rule of law as the principle of government. The trajectory in Ilyin’s understanding of law, from hopeful universalism to arbitrary nationalism, was followed in the discourse of Russian politicians, including Vladimir Putin. Because Ilyin found ways to present the failure of the rule of law as Russian virtue, Russian kleptocrats use his ideas to portray economic inequality as national innocence. In the last few years, Vladimir Putin has also used some of Ilyin’s more specific ideas about geopolitics in his effort translate the task of Russian politics from the pursuit of reform at home to the export of virtue abroad. By transforming international politics into a discussion of “spiritual threats,” Ilyin’s works have helped Russian elites to portray the Ukraine, Europe, and the United States as existential dangers to Russia.”

Snyder helpfully explores the core of Ilyin’s fascism in the need for a totalizing nationalist community of law, which recalls Hannah Arendt’s own view that totalitarianism is not the absence of laws, but a demand to follow unyielding and omnipotent ideological laws.

“Perhaps Jesus’ most remembered commandment is to love one’s enemy, from the Gospel of Matthew: “Ye have heard that it hath been said, An eye for an eye, and a tooth for a tooth: But I say unto you, That ye resist not evil: but whosoever shall smite thee on thy right cheek, turn to him the other also.” Ilyin maintained that the opposite was meant. Properly understood, love meant totality. It did not matter whether one individual tries to love another individual. The individual only loved if he was totally subsumed in the community. To be immersed in such love was to struggle “against the enemies of the divine order on earth.” Christianity actually meant the call of the right-seeing philosopher to apply decisive violence in the name of love. Anyone who failed to accept this logic was himself an agent of Satan: “He who opposes the chivalrous struggle against the devil is himself the devil.” Thus theology becomes politics. The democracies did not oppose Bolshevism, but enabled it, and must be destroyed. The only way to prevent the spread of evil was to crush middle classes, eradicate their civil society, and transform their individualist and universalist understanding of law into a consciousness of national submission. Bolshevism was no antidote to the disease of the middle classes, but rather the full irruption of their disease. Soviet and European governments must be swept away by violent coups d’état. Ilyin used the word Spirit (Dukh) to describe the inspiration of fascists. The fascist seizure of power, he wrote, was an “act of salvation.” The fascist is the true redeemer, since he grasps that it is the enemy who must be sacrificed. Ilyin took from Mussolini the concept of a “chivalrous sacrifice” that fascists make in the blood of others. (Speaking of the Holocaust in 1943, Heinrich Himmler would praise his SS-men in just these terms.)”

Imitation and the Sincerity of Flattery 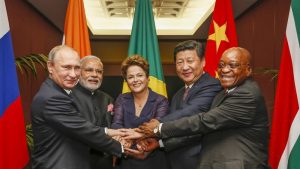 By Roberto Stuckert Filho, CC BY 3.0 br[/caption] In recent decades, authoritarian governments were at least constrained by the need to appear democratic. But after President Xi Jinping of China has been granted the power to rule for life, we are witnessing an alternative ethic emerge. As Ivan Krastev argues, there is increasingly no need for authoritarian regimes to even pretend to have democratic or liberal qualities.

“What is rarely discussed in this context is what the political scientist Ken Jowitt calls the “Versailles effect.” Looking at history, Professor Jowitt demonstrates how power can be best measured by the eagerness of others to imitate one’s institutions and lifestyles. In the 17th century, he argues, Louis XIV of France “created a remarkably powerful and prestigious regime, one mimicked from Germany to Russia, where mini-Versailles were built, French manners adopted, and the French language spoken by the elite.” In the 19th century, Britain’s Parliament became the object of political desire — Hungarians signaled their political ambitions by building a neo-Gothic Parliament building in Budapest as grandiose as the one in London. After World War II, the Stalinist regimes installed in Eastern Europe were all stamped with a similarly imposing and inhumane Stalinist architecture. After the end of the Cold War, imitating the West signified being on the right side of history. Holding elections and writing American-style Constitutions was as important for the image of the nation as having a smartphone is for the self-esteem of a teenager. For Professor Jowitt, “in the post-Cold War era, playing golf for the non-Western elite was what wearing togas was for the non-Roman elite in the ancient world.” And constraining a ruler’s power was one of the key ways that non-democracies adjusted to the age of democracy. That’s why many undemocratic governments insisted on maintaining democratic trappings, in particular elections and term limits. In 2008, for example, Vladimir Putin of Russia resisted the temptation to change the Constitution to allow him a third consecutive term as president because he did not want his country to look like one of the Central Asian republics where presidents never leave their palaces. Even though the system was rigged, undemocratic governments knew it was important to at least pretend it wasn’t. This — rather than the spread of liberal democracy — is the real evidence of democracy’s hegemony. Even China played along. Until now.” 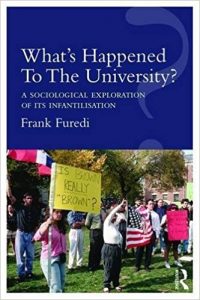 Heather Mac Donald and Frank Furedi disagree about the causes of the crisis on college campuses. Mac Donald argues it is the fault of progressives who embrace racial victimization. Furedi responds that students of all races and backgrounds are portraying themselves as victims. For Furedi, the problem has deep psychological roots in the internalization of an understanding of themselves as traumatized victims.

“MAC DONALD: Frank Furedi’s book What’s Happened to the University? is an astounding compendium of a cultural shift, with mind-boggling examples. However, I disagree, to a certain extent, with his diagnosis of the crisis on campuses. I think that it is fundamentally an ideological problem, not a psychological one. Greg Lukianoff, president of the Foundation for Individual Rights in Education, pinpointed the beginning of this trend in 2013. That was the year we reached critical mass in what has been the dominant ideology at universities for the past two decades: “victimology”—particularly, racial victimology. Universities today are dedicated to the proposition that American institutions, including universities themselves, create a literally threatening environment of oppression for people of color. You have minority students at Brown, for example, meeting with the provost and demanding that they be exonerated from any kind of academic expectations, such as showing up for class, because they have to protect their ability to exist on the Brown campus. This rhetoric has become standard. To be a minority on campus, in this view, is to be at actual risk of your life. Note that white male students—heterosexual white male students—are perhaps the most vilified group on campus, and yet they are not demanding safe spaces. The threat to free speech and the betrayal of the academic mission of rational, civil discourse are, of course, terrifying developments. Those threats, however serious, are not the worst aspect of academic culture today. The worst aspect is the cultivation of racial victimology and the belief in permanent, endemic racism. Even if we were to enforce civil debate, that racial victimology would persist, and it is poisoning our society. FUREDI: I don’t think that there’s much to debate regarding whether the problem is psychological, political, or cultural, because what we’re seeing is an intertwining of trends in all these areas. I disagree with Heather, however, about which students are driving the shift toward victimology. In England, it’s being driven by students at the Universities of Oxford and Cambridge, which are the British equivalents of Ivy League universities. If you look at the leaders of the movement, they’re not people of color—they’re not minorities of any sort. They come from the most privileged backgrounds. They’re all white, and a large percentage of them are actually white heterosexual men. They are as busy demanding safe spaces as anybody else. Privileged white students have led the way, and then constructed alliances with minority students. More evidence that the culture of victimhood isn’t exclusively driven by ideology is the fact that conservative students are mimicking the same behaviors as their progressive peers. When push comes to shove—when they feel under pressure—members of the “alt-right” are just as likely to play the victim card as the social-justice warriors. Of course, the biggest culprits at the moment are still on the left. But it is disturbing when conservatives, who claim to defend free speech, suddenly decide to shut down the free speech of, say, anti-Zionist speakers. It is an absolute double standard. The fact that everyone is playing the victim card is what we should be disturbed about… But I’ve also seen how the propensity for real psychological trauma has increased among young people in recent years. I’ve witnessed this shift firsthand over the 20 years that I spent administering exams at my university. Two decades ago, about two students out of 100 would attempt to opt out of any given exam because of mental-health problems, saying that their girlfriend or boyfriend had left them and that they were too traumatized to sit for the test. My response to this used to be, “Well, tough. Go do your exams.” But about ten years ago, the number of students asking to opt out increased to about 15 percent. By the end of my time as an examiner, one out of four students used these excuses not to take their exams, and we increasingly granted their requests. The trouble was that at a certain point, these students had begun internalizing their own rhetoric. After having been taught to self-victimize and to perceive hardship in every aspect of their lives, they have developed actual trauma. It’s a self-fulfilling prophecy.”