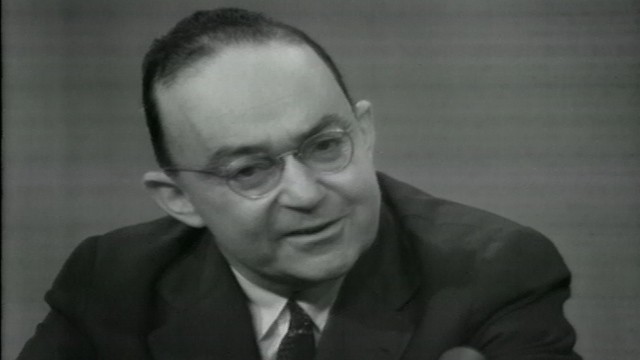 Theodore H. White on Thinking Unlike Your Friends

"To go against the dominant thinking of your friends, of most of the people you see every day, is perhaps the most difficult act of heroism you can perform."

Theodore H. White, in full Theodore Harold White (born May 6, 1915, Boston, Massachusetts, U.S.—died May 15, 1986, New York, New York), American journalist, historian, and novelist, best known for his astute, suspenseful accounts of the 1960 and 1964 presidential elections.The son of a lawyer, White grew up in Boston and graduated from Boston Latin School in 1932. After graduating from Harvard in 1938, he served as one of Time magazine’s first foreign correspondents, being stationed in East Asia from 1939 to 1945. He then served as European correspondent for the Overseas News Agency (1948–50) and for The Reporter (1950–53). With this extensive background in analyzing other cultures, White was well equipped to tackle the American scene in The Making of the President, 1960 (1961) and The Making of the President, 1964 (1965). Accepted as standard histories of presidential campaigns, these books present their subjects by intelligently juxtaposing events and treating politicians as personalities rather than as symbols.

White’s intimate style of journalism, which had its critics as well as its supporters, had a great influence on campaign coverage. He won the 1962 Pulitzer Prize for general nonfiction for The Making of the President, 1960; he was also acclaimed for his exclusive interview with Jacqueline Kennedy in the aftermath of her husband’s assassination, in which White compared the short-lived presidency of John F. Kennedy with the legend of Camelot. White went on to analyze the elections of 1968 and 1972 in later books.