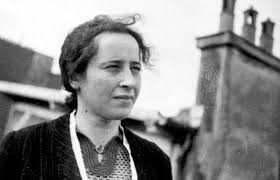 Hannah Arendt’s The Human Condition is not about human nature. Arendt says little if anything about what it means to be human in the sense of our natural humanity. Her inquiry is premised on the fact that we humans are conditioned beings, that we are born into an already existing world. That world is made through human artifice; it also conditions us humans insofar as we must live and die in a humanly built world. The Human Condition is a response to the insight that the human world we are born into is being so fundamentally transformed by science and technology that what it means to be human is changing as well.

One aspect of the human condition that has defined humanity for as long as we have existed is that we are at the mercy of nature, fate, and chance. Humans have built and rebuilt the world for millennia, but our capacity to bend the world to our wills has always been limited. We are what Arendt calls earthly beings, by which Arendt means that we are subject to forces and fates beyond our control. And yet, with the rise of modern science and modern technologies, it is increasingly possible that we can through cloning and genetic manipulation of humans as well by  molecular manipulation of inert matter, we will be able to free ourselves from the world given by fate and exchange it for something that we humans make ourselves. Through genetic engineering we humans may actually succeed in making life—the free gift from the gods—something that we humans create and direct. To do so would cut “the last tie through which even man belongs among the children of nature.” And if we were to build a new civilization on a new humanly created artificial planet where all matter and all life were part of a human design, we may still be human beings, but we will certainly have transformed our human condition. Arendt’s book is an effort not to oppose or cheer such technological advancements but to, as she writes, “think what we are doing.”

This admonition to think what we are doing comes to mind while reading Naalie de Souza’s account of new CRISPR gene editing technology. Souza writes:

Though scientists have been co-opting natural molecular scissors to cut DNA since the 1970s—these tools are at the foundation of modern biology—the CRISPR scissors are vastly more flexible and make it much easier to target any specific DNA sequence. The technology is still being developed, and the term “CRISPR” now roughly refers to a whole phalanx of molecular snippers and nickers and cut-and-pasters that all do slightly different things. Together they add up to a relatively easy and precise way of deliberately making a change to any genome, including that of a human.

“Deliberately” is an important word here. Not only do we indirectly shape the human genome through our choice of mate, we also affect it through other common activities. Every major medical advance—antibiotics, vaccines, sterile surgical and obstetric techniques—influences who lives to reproduce and who doesn’t, and so, indirectly, alters the genome. Certainly wars, pandemics, and education do so too. What is radically new is that we begin to have the option to change the human genome deliberately. For better or worse, our species can turn its inexorable will to control nature back onto itself. Eventually, we could guide human evolution. Does this mean that we should?