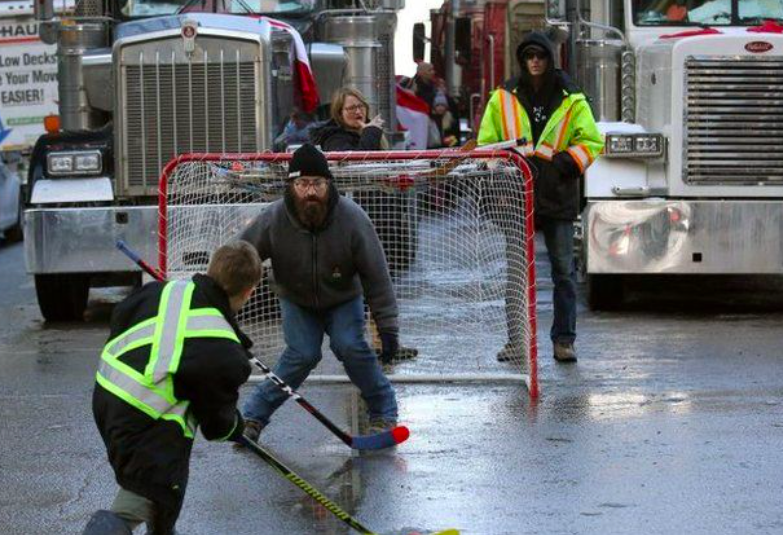 Roger Berkowitz
N.S. Lyons considers the Trucker protests in Canada now spreading around the world and argues that the protests force us to consider the divide between what he calls the physicals and the virtuals. The physicals work with their hands in the real world; the virtuals are what Christopher Lasch calls the “thinking classes” and what David Brooks calls the “creatives” or the “bobos.” Lasch, Brooks, and now Lyons refer to this as a new class divide. But these new groups share few common material or even political interests. Hannah Arendt noted a similar division division emerging in the late 1960s and she called the new civilizational group the “professional problem solvers” or the “intellectuals.” But Arendt denied they were a class because they lacked class interests; instead, these intellectuals—and increasingly those physicals who oppose them—are closer to ideological or even racial groups instead of classes. And that is why Arendt saw the emergence of the problem solvers to be so dangerous—as a small and ideologically coherent group that has power, the only way they can maintain their rule over a larger and ideologically opposed group is by embracing increasingly tyrannical means. Lyons’ analysis raises similar concerns.

To simplify, let’s first identify and categorize two classes of people in society, who we could say tend to navigate and interact with the world in fundamentally different ways.
The first is a class that has been a part of human civilization for a really long time. These are the people who work primarily in the real, physical world. Maybe they work directly with their hands, like a carpenter, or a mechanic, or a farmer. Or maybe they are only a step away: they own or manage a business where they organize and direct employees who work with their hands, and buy or sell or move things around in the real world. Like a transport logistics company, maybe. This class necessarily works in a physical location, or they own or operate physical assets that are central to their trade.
The second class is different. It is, relatively speaking, a new civilizational innovation (at least in numbering more than a handful of people). This group is the “thinking classes” Lasch was writing about above. They don’t interact much with the physical world directly; they are handlers of knowledge. They work with information, which might be digital or analog, numerical or narrative. But in all cases it exists at a level of abstraction from the real world. Manipulation and distribution of this information can influence the real world, but only through informational chains that pass directives to agents that can themselves act in the physical world – a bit like a software program that sends commands to a robot arm on an assembly line. To facilitate this, they build and manage abstract institutions and systems of organizational communication as a means of control. Individuals in this class usually occupy middle links in these informational chains, in which neither the inputs nor outputs of their role has any direct relationship with or impact on the physical world. They are informational middlemen. This class can therefore do their job almost entirely from a laptop, by email or a virtual Zoom meeting, and has recently realized they don’t even need to be sitting in an office cubicle while they do it.
For our purposes here, let’s call these two classes the Physicals and the Virtuals, respectively.
When considering the causes and character of the current protest, and the response to it, I would say the divide between Physicals and Virtuals is by far the most relevant frame of analysis available. In fact I’d say this is among the most significant divides in all of Western politics today.

John Ellis has another good commentary on the Trucker protests here.