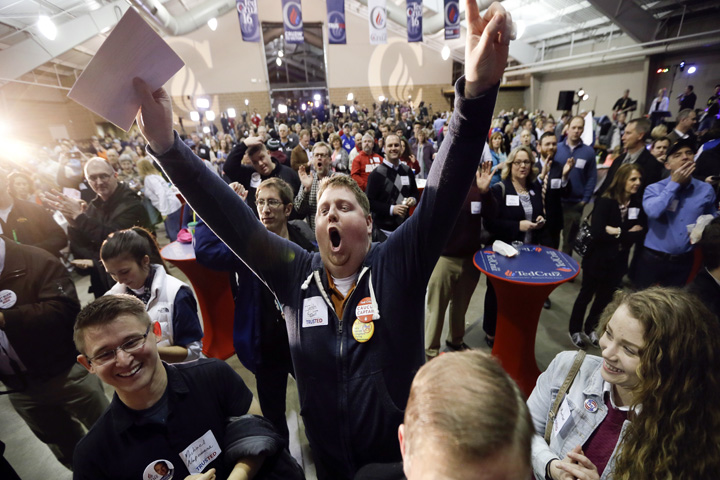 “Why Are Americans So Angry?”: Remembering Imagining Crisis

“The logic is clear--propaganda is to a democracy what the bludgeon is to a totalitarian state… The public relations industry not only took this ideology on very explicitly but also acted on it, that’s a huge industry, spending hundreds of… by now probably on the order of a billion dollars a year on it or something and its commitment all along was to controlling the public mind.”

It has been a strange week for the opening of the American primaries with the Iowa Caucuses. But perhaps strangeness is not such a bad thing. Perhaps it is exactly what a truly vibrant democracy thrives on, as both Chomsky and Arendt in Origins of Totalitarianism suggest. The unexpected is the stuff on which true participation, and not the mere playing out of propaganda, is made.

On the one side, the candidate who was supposed to be the uncontestable nominee barely edged out a figure who was supposed to be a minor limelight voice of radical progressivism. Hillary Clinton won the caucus, it’s true, but narrowly. Next comes New Hampshire, where current polling numbers suggest Bernie Sanders will almost certainly win. There is also little question that he has locked down his adjacent home state of Vermont. If any clarity comes in what will happen with the Democratic Party, it will not come until at least Super Tuesday, when sufficient numbers of delegates have been assigned to have a sense of what the truly national trend will end up being as opposed to specifically local configurations (although more must be said about that in a moment). The caucus was followed with a blustery debate between the two, in which neither appeared a clearly dominant figure. If the Clinton campaign has not yet put fully into motion the financial and grassroots might that it has been accumulating for several years thanks to a deliberate leveraging of a long political history, neither too has Sanders'. For all that he trumpets himself as the outsider, Sanders has no less a well-organized (or perhaps more importantly for the quotation above, well-orchestrated) institutional infrastructure himself. It is strange to hear a candidate who has held office in Congress since 1991 (making it 26 years) referring to himself as an “outsider”. No less damning criticisms could be made of Clinton, but the more important point is to highlight these strange linguistic disjunctions that seem increasingly to make up the stuff of this election. Sanders seems to use a unique confusion between his affinity with the European tradition of “social democracy”, a term which he most certainly embodies, and a “Democratic Socialist” (his preferred term, at least previously), a thought pattern to which he most certainly in the historical-philosophical perspective does not relate even remotely.

On the other side of the aisle, we find a victory for Ted Cruz over the presumed overwhelming frontrunner Donald Trump. We also have find, since the caucus, perhaps an even more important political move: a very rapid consolidation of centrist (Cruz or Trump supporters would say “establishment”) Republicans around Marco Rubio as a counterpoint to Cruz and Trump. The few candidates who had actually presented clear policy proposals for the incoming term have, for all intents and purposes, already been pushed out as evident in the pure literal structure of the Republican debates to date. Trump’s sheer, and in some ways his inexplicable ability to use claims which are what Arendt calls “factually, transparently untrue and yet nevertheless somehow convincing,” is well documented. What is perhaps stranger, though, is how little of Cruz’s rhetorical record seems to have even entered the national media narrative about the campaign at all. Admittedly, that is a bit fair, since Cruz has been a Senator, a national figure, for two years. But this is, after all, a candidate who felt no need to voice objection when Solicitor General of Texas under Governor Rick Perry suggested to then Representative Tom Tancredo’s that the proper American response to “Islamic fundamentalism” was to literally nuclear bomb Mecca. Ted Cruz speaks, with his wife Heidi Cruz by his side, after winning at his Iowa caucus rally in Des Moines, Iowa on Monday, February 1st. (Source: Daily News)[/caption]

There are advantages to being relatively unknown; the question is whether those advantages will be enough to overcome the Trump swell or the consolidation around Rubio. And that is actually unanswerable. There is a confrontation going that has come to be understood as “establishment” and “anti-establishment” voters. That ‘confrontation’, though, rhetorically had to be made into being.

The title of this piece includes a quote of the title by an article by Vanessa Barford, BBC correspondent to Washington, DC. Ms. Barford’s piece is excellent and pithy, but it misses perhaps the critical factor that has actually turned what was a brief (and rare in the last few years) détente in Washington back into the uproar it has once again become. Barford focuses on “facts”: demographics, polling divides, income distributions. But as Arendt cautioned in “Lying and Politics”, to reduce the dynamics of the political sphere to these statistical factors is to fundamentally misunderstand the profound role of narrative in politics. We’re back to having fractious “confrontations”, some of which actually contain deep ideological differences, many of which do not. But these do not arise purely out of the socio-material circumstances of a public. Political confrontations and crises, with rare exceptions like the Dust Bowl, do not simply exist. They have to be manufactured, and more importantly, their manufacture is a very profitable business and in fact, since the essential evisceration of campaign finance law in the United States, cannot be anything other than business. Even grassroots campaigning has become, albeit in a very different sense than the grand Super-PACs, a profitable business. It is in that moment that all forms of campaigning, even the most virtuous, come under risk of becoming the mere production of crisis. Again, to be fair, it is not at all true that all people who work in that business produce that. In fact, I have good friends who try very hard to resist that dynamic. It is a structural question. At what point is electoral politics reduced to the manufacture of crisis? And who are those who are still equipped to resist that?

Still, that is what made this week, and the Iowa Caucuses, so interesting. Despite that now dominant structural question, despite the fact that all of the major candidates have now characterized their opponents in ways which are blatantly false, despite the inescapable reality that politics itself cannot but be narrative, Iowa left us really not knowing. In a strange way, as bleak as the political season has been, that is a sign of actual deep hope in the democratic ideal. So many things remain possible. Many of those things, to different people on different sides of different political spectrums, may be deeply repugnant, some certainly are to this author. But the point is that we are at a moment--however “angry” Americans are, as Ms. Barford puts it--where despite all the fraught-ness of the future democratic possibility has reopened. The Clinton inauguration was put into question. The Trump machine hit a bump. Even if there are plenty of reasons to be concerned about the outcome, there is not the same despair that we could see from a mile away how the general election would look, let alone its outcome. In other words, they have been translated into reasons to be more politically participatory. And that, as Arendt thought in her first studies of American polity, is the stuff that makes democracy, even change, vibrant.