The Hannah Arendt Center hires student fellows for the Courage to Be Program, the Campus Plurality Project, and as media and communications interns. Interested in becoming a fellow? Email us at cstanton@bard.edu.

Courage to Be Program Fellows

Charlotte is a Junior at Bard, majoring in Global and International Studies.
She is interested in global economics and politics, specifically in women’s rights. Over the summer Charlotte gained insight regarding politics as she interned for the German government. Charlotte is interested in journalism and has been published in the online newspaper, Women’s eNews. When not in class, Charlotte likes to play soccer with her club, Women’s Soccer Club, or watch and make films with her friends.

Valentina Flores is a first-generation student at Bard College, majoring in Political Science and Human Rights. After completing undergrad, she aspires to attend a T14 law school to become a civil rights lawyer or a criminal defense attorney. Formally the co-leader of the Bard Immigrant Coalition, Valentina is a member of various on-campus clubs such that of Bard’s New Orleans Initiative, which has a focus on Criminal Justice work.

From Sandpoint, Idaho, Sage is a freshman at Bard, majoring in political science.   Sage throws herself into everything.  Her past includes being a part of a curated team of student leaders organizing the world’s largest youth-led event of its kind: the Count Me In Global Student Leadership Summit held annually in Toronto. Not to mention, she lived in Todi, Italy, during her junior year of high school on a Rotary Youth Exchange, experiencing much of Europe and learning to speak fluent Italian.  In addition, Sage acted as an ambassador of her community for several years as Miss Teen Rodeo promoting the community, goodwill, and service. Sage’s hobbies include kayaking, paddleboarding, back-country skiing, and horseback riding. When she is not in a class, you can probably find her running, working out, or at soccer practice.

Stecy Mbemba is a student leader from Chicago who has dedicated her work toward reimagining a more equitable society and practicing self-love. Originally born in Congo, Brazzaville, Stecy has utilized her experience as an African immigrant to inform her decision to continue fighting for marginalized voices. Now a Junior in the sociology department, her interests include legal practices and international affairs. As a leader of both Womxn of Color United and the Bard New Orleans Exchange, she has dedicated her time to the wellbeing of femmes of color and deconstructing the prison industrial complex. This year, Stecy has taken a more active role in engaging with the greater Hudson Valley through her work at the Kingston Housing Lab, where she works to provide fair housing to displaced families and members of the community. In her downtime, she works to with the National Black Justice Coalition exploring and defining what thriving looks like for black queer youth. Together, they have developed a curriculum that will be instituted in public schools in New York state and Florida. Stecy is excited to continue her commitments to all these causes through her work as a Courage to Be Fellow at the Hannah Arendt Center!

ISIS PINHEIRO
Isis Pinheiro is a transfer student from Bard High School Early College Manhattan. She plans on majoring in Literature with a concentration in Africana Studies.
In the past she has written an award winning inquiry project examining support systems for girls of color in NYC schools and participated in various programs centered around activism and community organizing. Among many things, her interests include travel, music, as well as theatre and performance. When she doesn't have her head in a book, you can probably find her at the gym or riding her bike.

SKYE CARTER
Written Arts major with a concentration in Human Rights
Being a second-year student in the Written Arts Program here at Bard, and lover of spoken word, finding Skye muttering over her assigned texts is more than commonplace. Though in that same vein, one could say this too is Skye doing as she aspires to, in marrying her art form with that of others, orally and visually, in a manner that acts fluidly as a foundation for which her intersections can comfortably meet. If seen walking, she's likely returning from great conversation or great music. If seen on her bike, she's probably riding to and fro one of the (too) many on-campus clubs she either leads or is an active member of, such as The Difference in Media Project, Queer People of Color (QPOC), Culture Connect, POC Theatre Ensemble, and more.

Rosie Levi
Rosie is a senior at Bard, majoring in philosophy with specific interest in political philosophy, metaphysics, and philosophy of language. Her fascination with understanding (and improving) how we communicate with one another drew her to the Hannah Arendt Center and its commitment to respectful disagreement and challenging discussions. During her time at Bard, Rosie has headed the Jewish Students Organization, organized events on stereotypes and mass incarceration, and started the Friendly Philosophers' Society, which she helps run. Over the breaks Rosie works as a research assistant on several projects that range from analyzing conversation quality to communicating with underserved communities about end-of-life planning. For fun Rosie writes poetry, researches etymology, and plays card games with friends.

MAX KLEWENO
I am from the gorgeously gray Evergreen State. I grew up influenced by my father's passion for the writings of Hannah Arendt which has come to influence the way I think today. This is also, not coincidentally, how I became involved with the Arendt Center and fuels my passion for discourse.

My name is Aja Melville; I am a sophomore at Bard College pursuing a joint major degree in International Relations and Chinese Language. In addition to being a Tough Talk Fellow with the Hannah Arendt Center for Politics and Humanities, I am currently working as a writing consultant with the hope of one day joining the Bard Prison Initiative Team. Growing up in Los Angeles, California didn't leave me surrounded with much diversity in political thought, and the further I venture away from my bubble the more I recognize the importance of familiarizing myself with opposing views. I believe that access and exposure to information are essential components of a prosperous society and educated public. This past summer I was fortunate enough to have spent the summer abroad in China where I experienced first hand the effects censorship and political ostracization have on a population; this experience along with personal interests leave me ecstatic to be working with the Hannah Arnedt Center to explore the effect free speech and the lack thereof has on our communities. In the future I hope to pursue a career in civil service and work alongside diplomats to broaden access to information and acceptance of free speech. Until then, I will continue to engage in expressive activities including creative writing, dance and political debate.

Ariela is a Junior at Bard, majoring in Anthropology and Middle Eastern Studies. Her primary academic interests include: Colonialism and Postcoloniality, Nationalism, and the Politics of Identity and Inequality, particularly as manifest in the context of the Middle East. The act and art of storytelling underlies almost all of her interests (reading, writing, travel, music), so she is excited to continue shaping and sharing stories as a Communications Intern at the Hannah Arendt Center. 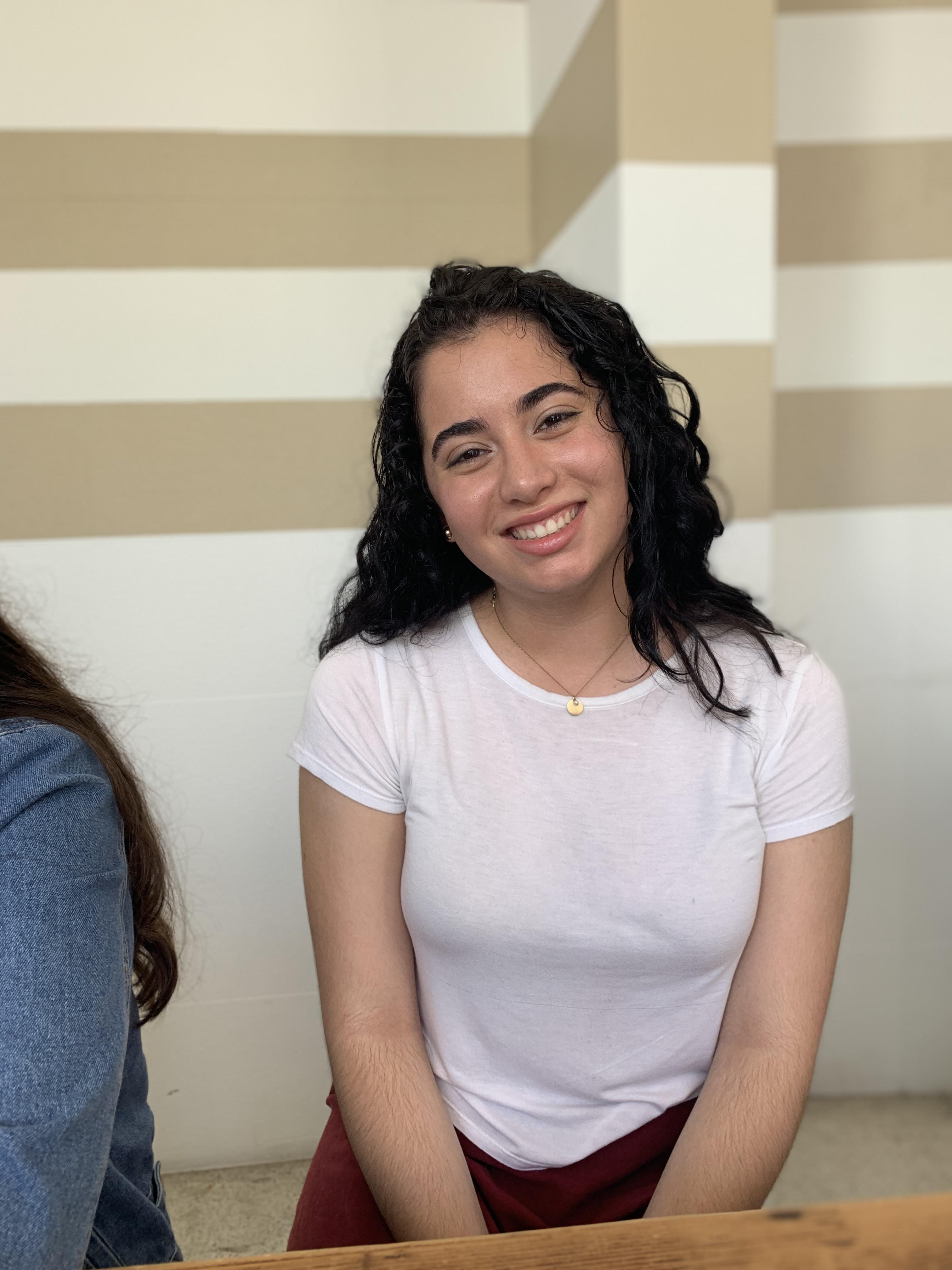 My name is Georgi Valero and I’m a freshman from Miami, Florida; I hope to double major in Literature and Written Arts with a focus on human rights. I’m passionate about writing and have a love for films and enjoy learning about the process of how films are made. I hope to enhance my current skills and explore my passions for writing and editing through my work.

Positions at the Hannah Arendt Center vary every academic year. Please get in touch to learn about current opportunities.