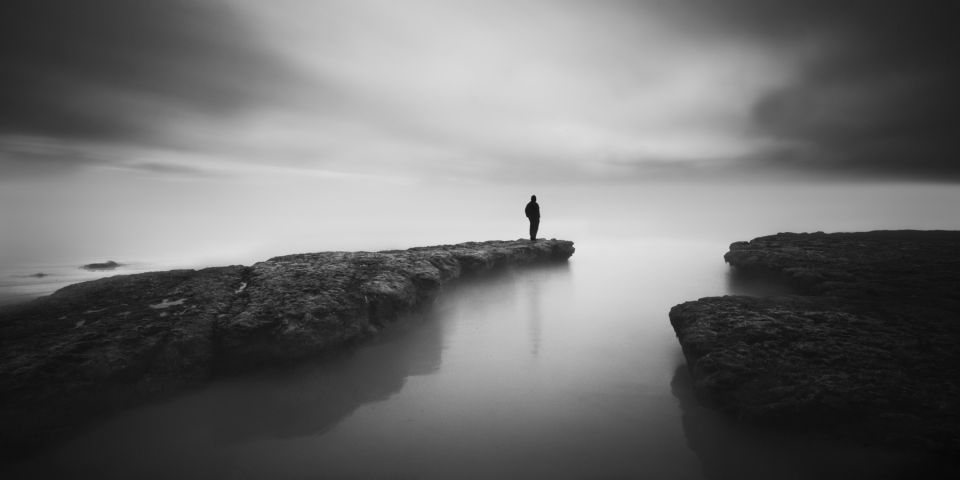 Even in Solitude There Are Always Two

“In solitude a dialogue always arises, because even in solitude there are always two.”

In the back of a volume of letters sent between Louise von Salome and Rainer Maria Rilke, Hannah Arendt wrote in pencil: “253, 256, Einsamkeit.” On the corresponding pages, she marked out two passages from a letter from Rilke to Salome from January 10th, 1912. The first:

Can I, despite everything, move on through all this? If people happen to be present they offer me the relief of being able to be more or less the person they take me for, without being too particular about my actual existence. How often do I step out of my room as, so to speak, some chaos, and outside, perceived by someone else’s mind, assume a composure that is actually his and in the next moment, to my astonishment, find myself expressing well-formed things, while just before everything in my entire consciousness was utterly amorphous.

When he wrote this letter, Rilke had been alone for several days after the departure of a guest. He thanks Salome for her letter and describes the comfort and enrichment he got from it. (He uses a strange and vivid simile about a single ant that has lost the anthill.) He only knows himself through others, and when left alone, he feels völlig amorph--completely formless. Arendt may be able to create two out of her own one, but Rilke makes Salome into a dummy “second,” to whom he addresses his private thoughts for the purpose of ordering himself in a way that only happens in the presence of others.

What I find interesting is the use of the word Einsamkeit by both Arendt and Rilke, who explains in the second marked passage:

I merely want you to know what I meant by “people”: not any forfeiting of my [Einsamkeit, here translated as “solitude”]; only that if it were a little less suspended in mid-air, if it were to find itself in good hands, it would lose all its suggestions of morbidity (that is bound to happen eventually), and I would finally achieve some sort of continuity within it instead of carrying it around like a pilfered bone from one bush to the next amid loud hallos.

Einsamkeit could mean the deeply personal and negative feeling of the English “loneliness”; the more neutral, artistic state of “solitude”; the intentional “reclusion”; or (often externally) imposed “isolation.” Each of these options would give a different taste to Rilke’s letter. It is interesting and slightly odd that Arendt chose to bracket these two passages in her book, since they illustrate an instance of Einsamkeit which seems to contradict her ideas on that subject.

She makes a great deal of entries in her “Thinking Diary” about Einsamkeit (in these cases she clearly means “solitude” as a tool for thought), especially in the early nineteen-fifties. Arendt argues that we live our whole lives in plurality, either in public, in private, or in solitude. She defines Einsamkeit as “Alone with myself: thinking,” and writes, “In solitude a dialogue always arises, because even in solitude there are always two.” But even in the case of Verlassenheit, her preferred word for “loneliness,” she sees a positive: “Thinking or thought is the only positive side of Verlassenheit.”

In the case of Rilke’s solitude specifically, Arendt writes in her essay on his Duino Elegies that solitude is necessary for Rilke, given the transient nature of the world. We simultaneously are abandoned by things and abandon them ourselves, and this double act, active and passive, is known as solitude. She argues that love is an exceptional emotion because it does not attach itself to only one person or thing, thus abandoning and being abandoned. In fact, according to Arendt, “love lies in this abandonment alone.”

However, given the way Rilke discusses his Einsamkeit in the letter, it seems that he cannot always put his solitude to good intellectual use as Arendt would like; rather, it owns him. It morphs into a loneliness he cannot control.

Rilke usually treasures his solitude; he wrote a dark yet reverent poem titled “Einsamkeit” in 1902, and the final stanza of his poem “Herbsttag” (also from 1902) is similarly comfortable in its loneliness:

Whoever has no house now, will never have one,
Whoever is alone will stay alone,
Will sit, read, write long letters through the evening,
and wander on the boulevards, up and down,
restless, while the dry leaves are blowing.

Rilke, in his earlier poems, is able to relish his Einsamkeit, but in his letter to Salome of January 10th, 1912, he is not just alone; he is lonely.