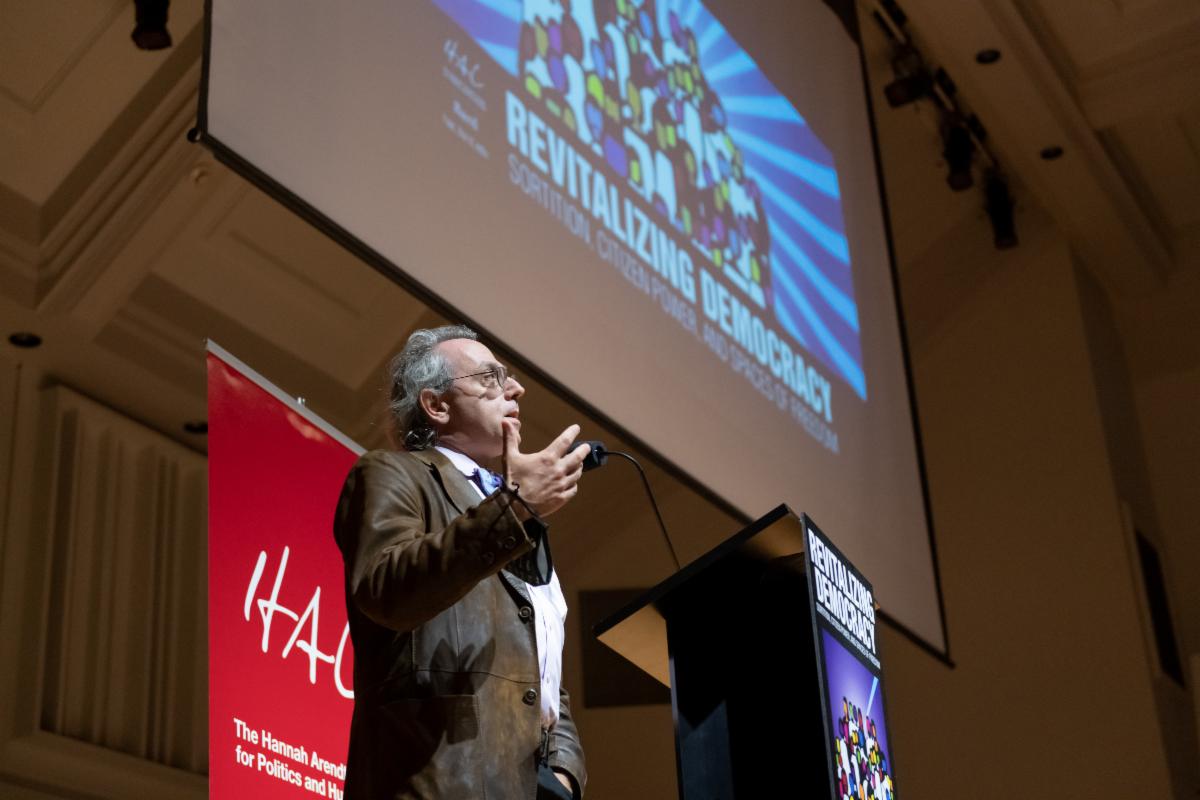 Join us for another year of risky thinking...

Gift a membership at 25% off

Our recent conference on Revitalizing Democracy: Sortition, Citizen Power, and Spaces of Freedom  included talks from Masha Gessen, Kali Akuno, Hélène Landemore, Uday Mehta, David van Reybrouck, and Jane Suiter  and others. The crisis facing democratic regimes today is cause for serious concern; it is also an opportunity for deep reflection on questions and assumptions concerning liberal representative democracy. Instead of assuming a defensive posture and taking up arms to defend the status quo, our conference asked: how can we revitalize our democracy? Watch the full conference here.

Along with our conference, HAC partnered up with the Pickner Center at Columbia University to build a website dedicated to lessons and modules centered around Sortition. This website contains introductory videos and interactive pages which discuss Sorition’s history and practical implications. Check it out here. This website is sponsored by the Open Society University Network (OSUN). Read more about HAC’s programming with OSUN below.

The 2022 Fall Conference will take place on October 13-14, 2022. The Conference, Rage and Reason: Democratic Life in the Age of Social Media, will ask how liberal democracies can survive the rise of rage and the decline of public reason. In this regard, it is helpful to recall that rational public discourse is not the norm but is an anomaly for much of history. Beginning in the 17th century with the rise of social science, a discourse of expertise and scientific government slowly consolidated power and authority, so that citizens came to have faith in experts to govern wisely. That faith was shaken by populist and totalitarian movements in the 1920s, but the rise of totalitarian governments led democracies to reject a politics of anger and mobilization. We are witnessing, once again, the retreat of reason and the return of rage and emotion as key political drivers.

Social Media is not to blame for the political impact of rage, but the algorithms that drive social media do allow emotional and angry opinions to spread with vigor and vitality. It is easy to condemn social media for its filter bubble, its algorithmic spread of rumors and conspiracies, and its polarizing impact on our lives. But social media is so successful in splintering our society because the very foundations of liberal democracies are so tenuous. It is 60 years since Hannah Arendt wrote in her essay “What Is Authority?” that she should have titled it, “What was authority?” Our 2022 conference will ask how democracy and reason-based public culture can survive the loss of authority, the breakdown of expertise, and the rise of social media.

The Arendt Center's Virtual Reading Group is currently reading Life of the Mind and will start reading Lectures on Kant's Political Philosophy on February 11th, 2022. The VRG has grown to include between 80-120 dedicated readers every week and our discussions are a mix of real textual exegesis alongside broadminded efforts to think with Arendt about our present world. Learn more here.

Support us by renewing your membership

This year, the Arendt Center partnered with the Richard Saltoun Gallery in London. The Gallery sponsored  a year-long exhibition in which artists have been asked to respond to the Preface and then the eight essays in Hannah Arendt's collection Between Past and Future. In conjunction with the exhibition,  the Arendt Center and the Richard Saltoun Gallery hosted a series of reading groups to highlight the way Arendt's work inspires and speaks to artists in the 21st century. If you missed our sessions, you may watch them here.

The Arendt Center is an intellectual space for passionate, uncensored, and non-partisan thinking that reframes and deepens the fundamental questions facing our world. We aim to nurture bold and provocative thinking that seeks, in the spirit of Hannah Arendt, to "think what we are doing."

Last year, we were excited to announce last year The Hannah Arendt Humanities Network (HAHN). HAHN was established to nurture a culture that values and strengthens the humanities as the foundation of an open society. During its first year, The Network supported the integration and accessibility of humanities study across Open Society University Network (OSUN) institutions. The HAHN projects included;

1. Yehuda Elkana Fellowship in the Engaged Humanities: An annual event hosted by the Hannah Arendt Center in collaboration with the Institut Für Die Wissenschaft Der Menschen (IWM) in Vienna in June 2021.This fellowship was awarded to Helga Novotny and her manuscript, In AI We Trust: Power, Illusion and Control of Predictive Algorithms.

2. HAHN Text Seminar: a weekend-long seminar that brought together OSUN scholars and students from around the world to discuss Karl Popper’s seminal text, The Open Society and Its Enemies, here in New York. Some universities that were represented include Universidad de los Andes, Central European University, McGill University, University of Belgrade, and University of Witwatersrand.

3. Structured Democratic Dialogue: Coordinated by Future Worlds in Cyprus and HAHN, students and staff from across OSUN came together virtually over the course of three weeks in March of this year to systematically address educational, economic, and racial inequalities in our university communities

4. Artificial Intelligence Working Group: A conference that enabled OSUN scholars to gain expertise in, and to explore the possibilities and consequences of, the rise of artificial intelligence for human life this past June at CEU in Vienna, Austria

5. Network Faculty Seminars: Over the course of the Spring Semester, OSUN faculty members invited other OSUN scholars to virtually visit their classrooms to give lectures on human rights, Arendt’s On Violence, law in Central Asia, among other topics at Al Quds Bard and AUCA.

7. This past November, we kicked off our 2021-2023 OSUN grant with a forum on Socialism, Liberal Democracy, and Market-Oriented Systems with the Mercatus Center in Alexandria, Virginia. The three day forum invited experts on democratic socialism and free markets to model and demonstrate how to have conversations with persons who disagree with you on economic policy, among other points of debate. 10 OSUN students as well as 10 other students from American and international universities participated.

HAHN has 12 more programs lined up for the next year, including a writing retreat in Latin America, a forum on populism in Taiwan, and a conference on citizen assemblies in Serbia.

We cannot do it without you! We are grateful for your continued support of the Hannah Arendt Center.

Our dedicated team at the center continues to grow. Jacob Rivers was promoted into a full-time position running our Hannah Arendt Humanities Network. In August, we welcomed Tara Needham as the new Assistant Academic Director. Philip Lindsay joined the team in October as the new full-time Communications Coordinator. This year we added another stellar team of student fellows to our center: Valentina Flores, Sage Saccomanno, and Ogechi Egonu [Center  Fellows] Leo Cronan, Maggie Hough, and Ismael Vicente Delgado [Plurality Forum fellows] Naomi Miller, Yizhen Dai, Elsa Joiner [Courage to Be Fellows] and Georgi Valero, Juan Glassford, and Barak Fellner-Dublin are our Media Fellows. You may read their bios & learn more about our student fellows, here.

A large part of our annual budget, including our annual journal and conference, is supported by contributions from members like yourself. Your support is necessary and deeply appreciated. We wish you a very thoughtful and provocative holiday season, and hope to see you at Arendt Center events in 2022!

Join or Renew your Membership Today! 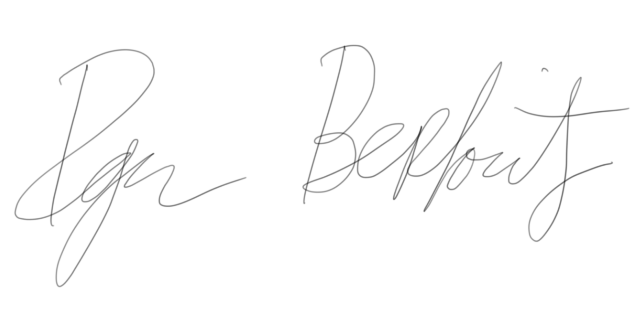