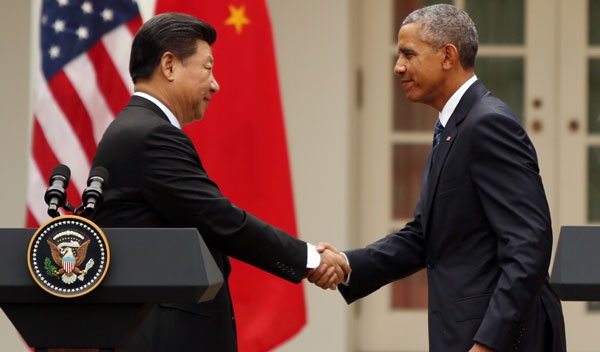 We Never Left: When Nixon Went to China, or when Xi Came to America

-- Hannah Arendt, “The Difficulties of Understanding”

Professor Andy Murphy of Rutgers University a few years ago handed me a rightful chastening in his review of my paper that I have not forgotten, and his lesson might be summed up as follows: there are few words more dangerous than “we”. Bearing that lesson in mind, this is in no way meant to represent the “Arendtian” response to Professor Baehr’s erudite condemnation of the political practices of the Xi regime in China. Arendtians are, as I think she would be proud of, a fractious bunch, so these are merely some thoughts gleaned from some conversations with some like- and unlike-minded that attempt to remedy what Baehr sees as a public silence, if only by way of suggesting that silence has not been so silent after all. The Origins of Totalitarianism (Source: Amazon)[/caption]

There is a long and rather sordid tradition in German thought--dating back at least to some of Kant’s more unsavory lectures on racial anthropology, through Schiller and Hegel and, yes, even Marx--of using the figure of China as a stand-in for the backwards-looking, stagnant, tyrannical counterpoint to the Enlightened progress of European states. It is not entirely surprising that Arendt was instinctively loath to add her name to that list, but her inhibition was not merely historical and cultural: it was principled. If there is a similar inhibition to blanket condemnation of the current regime in China among “Arendtians”, it is likewise principled and based on Arendt’s own reservations. For Arendt, as she reiterated time and again in her lectures surrounding The Origins of Totalitarianism, the danger of particularly the American attempt to make meaning of the totalitarian moment was precisely that the social sciences sought to reduce totalitarianism, in its “horrible originality”, to a raft of old political tropes that could be easily digested and used to “misrepresent” the true stakes of totalitarianism's uniqueness under “a welter of familiarities and plausibilities”: tyranny, dictatorship, violence, political closure. As a response to Prof. Baehr, I am tempted to simply post the essay cited above, but these things involve copyright issues.

Arendt’s consistent emphasis on treating political phenomena not in terms of their familiarity but in terms of their radical newness is precisely why it is worth resisting the exercise of displaying a raft of a regime’s atrocities and saying “See, it’s just like Mao”, let alone “See, it’s just like Hitler and Stalin”. The practices of the Chinese regime since Xi’s ascension have been aggressive, often brutal, sometimes humanly repugnant. But the modern Chinese state, with its infinitely more complex (and also problematic) relationship to developmental capital, its use of post-neoliberal financial implements to assert its presence globally beyond its immediate sphere, and its savvy at walking the line between Tiananmen and a Hundred Flowers, is an exceedingly different beast than the regimes Arendt understood as inaugurating totalitarianism, and we will make little headway in understand the meaning of the rise of its novel model of the State in the 21st Century by pretending otherwise. Certainly, Xi has reiterated what was until Hu the party line on cultural expression, and Ai Weiwei’s treatment during his detention was horrific. This month, the artist opened a show at the Royal Academy in London, the themes of which could not express a more scathing critique of the regime. But Ai Weiwei did so in full view of Xi. Let us not mince words: under Hitler or Stalin, he would simply no longer be, as so many of his “analogs” at the time then were murdered. Mo Yan, whose short stories in particular contain subtle if brutal criticisms of the contemporary state, is criticized by other critics of the state more often than by the regime for being insufficiently…critical. None of this is to say the Xi regime is nicer, better, “fitter, happier…more productive”. Quite the opposite: it is to say that to engage the problems of Chinese censorship, expansionism, financial manipulation, and diplomacy, we do ourselves no favors by waving Origins in the air. If Arendt was loath to do it with Mao, now scholars should be all the more loath to do it with Xi.

There is, of course, also a dimension at least among American scholars of “let s/he who is without sin cast the first stone”, or perhaps something more of the line of glass houses. Of the regime’s sins Baehr lists under “today, by contrast” as it “revert[s] to standard totalitarian behaviors”, I struggle to find one that could not be readily analogized to the manipulation of global financial markets by signals from the Federal Reserve, the immense militarization of the American police force and its para-arms along the southern border, the physical and legal atrocities that have made this the year of Ferguson and Charleston, and the treatment of women and men like a certain Edward Snowden, soon to give a live broadcast at the behest of the Hannah Arendt Center. This is not to say the analogy is inapt. It is to say that it is too apt to be treated so lightly. It is not to say that America is China; it is to say that the sheer silliness of that comparison of problems should make us think twice before rushing to analogy. Like Rawlsians, Tullyians, Berlinians, and any number of other ians, Arendtians have many vices, but ignorance of contemporary global politics is rarely one of them. Rather, “we” simply are, like Arendt, focused on treating the realm of the political as the realm of the radically, and often atrociously, new. One can couch the terms of confronting and resisting the dominances of the Chinese government on many terms, but a rallying cry of “where are the Arendtians?!” is not one of them. “We” are many places, because “we” do not agree on exactly the nature of the problem: nor should we. For while “we” only know, but do not yet understand, what it is we are fighting against, “we” are at least quite certain it is not what we have fought before.