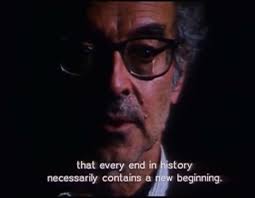 The Nature of Totalitarianism

Listen to the great Jean-Luc Godard deliver a monologue from Hannah Arendt’s essay “The Nature of Totalitarianism.”

Revitalising Democracy: Citizen Juries as a Response to the Failure of Expert Rule

I was in Ljubljana in early June to speak at a conference, “What Kind of Government?” You can watch recordings of the talks including my own talk “Revitalising Democracy: Citizen Juries as a Response to the Failure of Expert Rule.”
06-24-2021
Video

The 2019 Hannah Arendt Center Annual Conference “Racism and Antisemitism” began with Arendt’s insight that antisemitism is a form of racism in that both are ideologies of supremacy and inferiority based on racial difference. Enjoy this video about the conference made by Bard Student and Arendt Center Fellow Jonathan Fine.
12-30-2019

On the Hannah Arendt Center’s Conference: “Racism and Antisemitism”

Batya Ungar-Sargon, Reverend Jacqui Lewis, Shahanna McKinney-Baldon, Amy SchillerAfter the 12th Annual Hannah Arendt Center Conference, this year on “Racism and Antisemitism,” the journalist Batya Ungar-Sargon posted an editorial in the Forward claiming she was protested at Bard College for being Jewish. She said she was prevented from continuing to speak, and that Bard College had no plan to deal with the protesters.
10-16-2019
Video

A Symposium: Reimagining Human Health: The Microbiome, Farming, and Medicine.

Hua Wang, Professor in Department of Food Science and Technology, Microbiology, and Interdisciplinary Ph.D. Program in Human Nutrition (OSUN) at the Ohio State University, talks about the overuse of antibiotics and the health of the human microbiome in anticipation of the Symposium at Bard, September 19th and 20th.
09-03-2019
Video

An Interview with Uday Mehta

Zelda May Bas interviews Uday Mehta as part of the Hannah Arendt Center dinner and lecture series, "The Courage to Be." This video was first recorded in 2015.
08-12-2019
Video

A discussion from our 2015 Annual Conference: Why Privacy Matters: What Do We Lose When We Lose Our Privacy?
08-02-2019
Video

Martin Blaser is the director of the Center for Advanced Biotechnology and Medicine (CABM) at Rutgers Biomedical and Health Sciences (RBHS). Here, he speaks with Roger Berkowitz in advance of the Hannah Arendt Center's upcoming Symposium on Reimagining Human Health: The Microbiome, Farming, and Medicine.
07-15-2019
Video

The Courage to Be

Is Liberal Democracy Our Future?

This talk was a part of the Hannah Arendt Center's 10th annual conference, "Crises of Democracy: Thinking in Dark Times".
06-29-2019