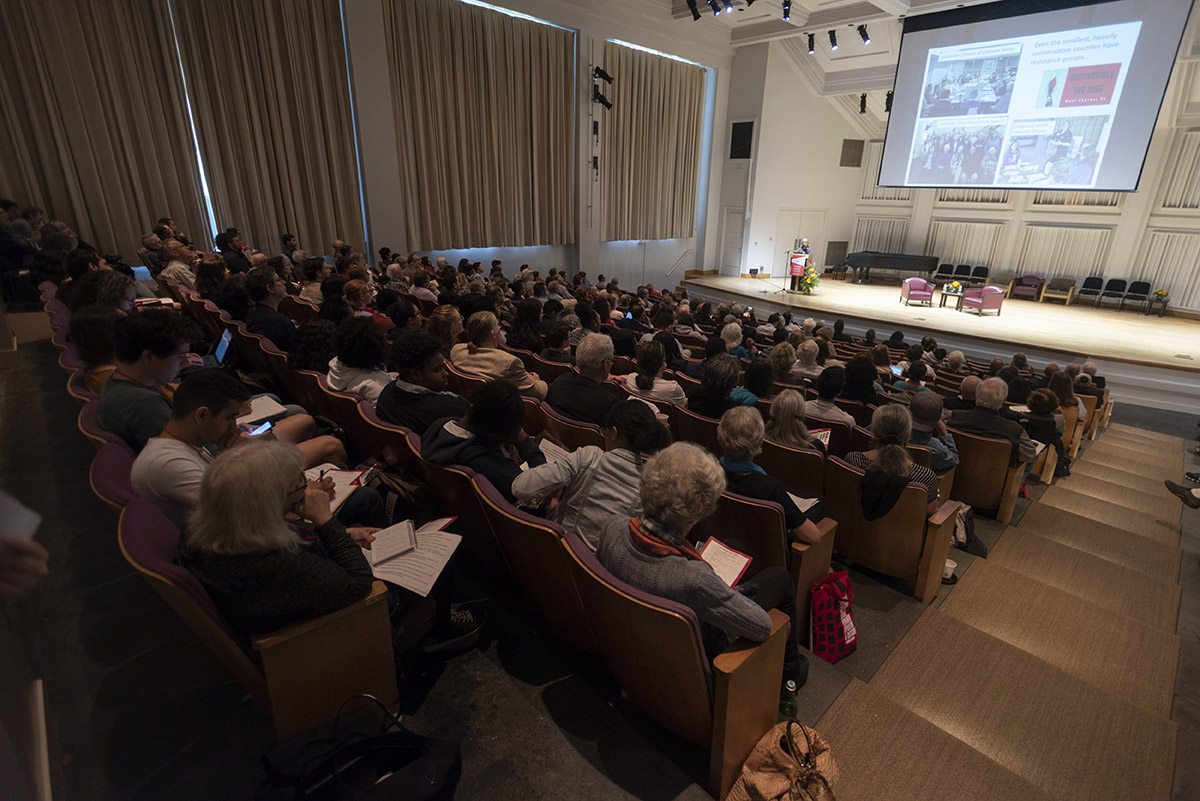 By Marion Detjen
I am aware of the fact that the last German who stood here in a Hannah Arendt conference to speak to you about Germany was Marc Jongen, the so-called party philosopher of the AfD, the German extreme right-wing party. While I am not going to apologize for my bad English, one could easily get the impression that Jongen and I represent the two opposing and conflicting camps which these days challenge and strain the cohesion of German society...
01-15-2020

Saving America Once Again: Comparing the Anti-Trump Resistance to the Tea Party

By Theda Skocpol
What I’m going to do today is to talk about two remarkable upsurges of self-organized citizen activity that have spread across the United States in just the last decade. I’m going to be talking about the Tea Party from 2009 to 2011—although there are still some Tea Parties meeting—and the anti-Trump grassroots resistance that has self-organized across many communities in the country since the November 2016 election.
01-03-2020

Democracy in Name Only

By Jerome Kohn
Adolf Eichmann was a Nazi Higher SS officer and member of the Gestapo during the Second World War. When the Final Solution of the Jewish Problem was adopted as German policy at the Wannsee Conference in January 1942, it became Eichmann’s job to organize the destruction of millions of Jews.
12-27-2019

America: What Are We Fighting For?

By Roger Berkowitz
The Hannah Arendt Center Conference “The Unmaking of Americans: Are There Still American Ideas Worth Fighting For?” posed a simple yet controversial question: Is America an exceptional country? In other words, Is there an American Idea? And if yes, what is the idea on which America is founded? Those of us who care about the collective American project— the idea of building a common constitutional democracy—have an imperative to ask: What is...
12-10-2019

Whistleblowing as Civil Disobedience: Leaks in the Era of Trump and the Deep State

Writing in the March–April 2018 issue of Foreign Affairs, the political philosopher Michael Walzer, whom some of you may know as the author of Just and Unjust Wars, identified several types of leaks and whistleblowing and explored their ethical implications. Walzer defined whistleblowing as conveying what a person “believes to be immoral or illegal conduct to bureaucratic superiors or to the public,” and he implied that there was no way to make...
12-04-2019

What Does It Mean to Educate Citizens?

Leon Botstein, Bard College President, discusses education and the public sphere in this talk from our 2013 Annual Conference
11-20-2019

by Roger Berkowitz
In the years leading up to the Civil War, there were more than seventy violent clashes between Representatives and Senators in Congress. In her book Field of Blood: Violence in Congress and Road to Civil War Joanna Freeman tells a story of a raucous antebellum Congress replete with bullying, dueling, and fistfights.1 Even amidst the bitter animosity that pervades Washington, D.C., in the era of President Donald Trump, it takes some effort to imagine our elected officials...
10-02-2019

The Four Prejudices Underlying Our Crises of Democracy

This essay by Roger Berkowitz was originally published in HA: The Journal of the Hannah Arendt Center.
08-02-2019

Journal Feature: The Destiny of Freedom

This essay was oringally published in HA: The Journal of the Hannah Arendt Center.
07-12-2019